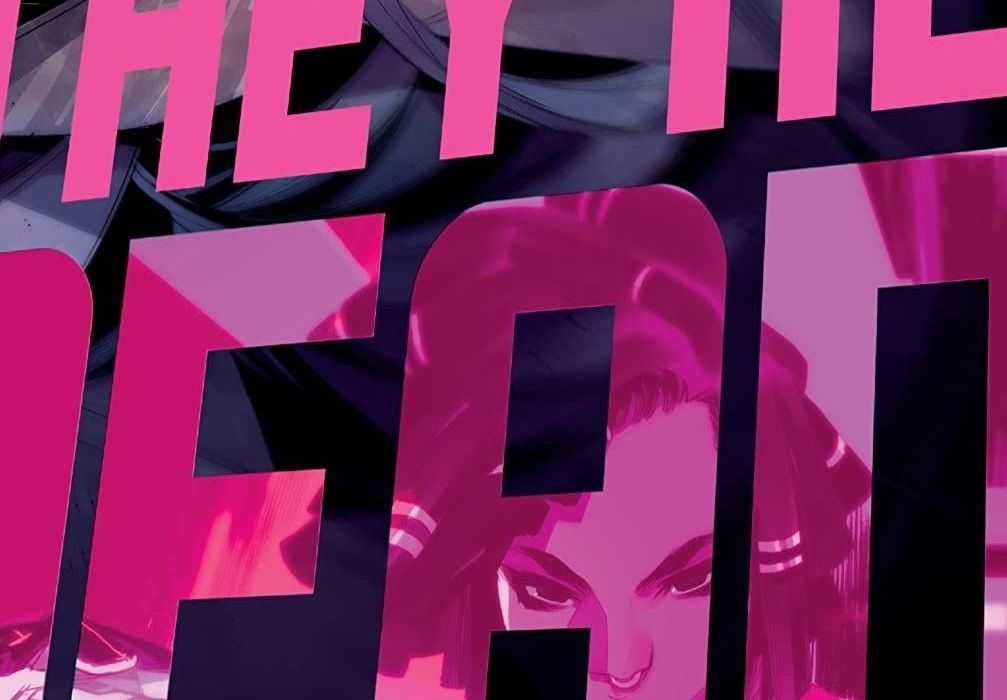 It’s not surprising that space is a popular setting. Space is a beautiful set of contradictions, it’s beautiful and infinite but also cold and isolating, an opportunity for endless adventure but with plenty of opportunities to lose yourself along the way. Good science fiction gives an author the ability to explore all of these different ideas of space (even the most optimistic sci-fi has elements of the daunting unknown of the universe) and the impact that space has on people who’ve chosen to live their lives out in the void. In “We Only Find Them When They’re Dead” #2, Al Ewing and Simone De Meo explore the impact of living a lifetime in space, not only with dialogue but with the interesting and bold use of colors. 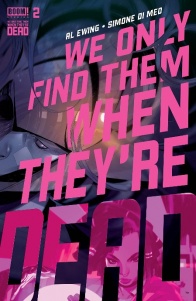 Cover by Simone De Meo
Written by Al Ewing
Illustrated by Simone De Meo
Colored by Mariasara Miotti
Lettered by AndWorld Design
Captain Malik and the crew of the Vihaan II escape from their tyrannical government — and chart a course straight to the first living god they can find! But the only thing more dangerous than what lies ahead of them… is who follows behind them.

After a strong first issue, “We Only Find Them When They’re Dead” #2 continues the story of the Vihaan II, an autopsy ship that harvests the remains of celestial entities thought to be gods. Issue one shows the inner working of the system, but in #2, we are given insight into the crew and the decision to follow their captain on what is likely a suicide mission to try and find a living god. The issue skips between two years as Georges and his crew begin to plan the impossible. While the majority of the issue focuses on Jason and his relationship with the captain and sister, it gives some insight into how the crew views their upcoming quest. It’s interesting to see where each crew member is coming from and shows how they relate to the universe. Georges is a man who, while not quite broken, has seemingly lost some of himself. While harvesting dead gods makes good money, it just doesn’t seem to be enough for the captain, a man who has experienced a good amount of loss over the years. He has lost his parents, has been harvesting for quite a while, and is living with greater scrutiny from “the colony” because of the actions of his parents. Yet, he’s a man who wants more even if he’s not quite sure what more is. In a tender scene with Jason, he tries to plant seeds of doubt into his lover’s mind. Al Ewing does a good job of creating nuance to Georges, a man who is seemingly confident enough to go to the edges of the galaxy but without necessarily a clear motivation as to why. Perhaps he’s looking for a truth he can’t find maybe he wants to go out in a blaze of glory. In any case, he’s a man with a mission.

The more interesting relationship, though, is between Jason and Ella, his sister and ship coroner. Jason seems to be a true believer, perhaps even more so than his captain. Ella, on the other hand, is a no-nonsense professional who is simply trying to keep her family safe. Ella doesn’t want to go on this mission but has accepted that it has become a damned if you do, damned if you don’t situation. By the time “We Only Find Them When They’re Dead” #2 begins, it’s already too late. The conspiracy has reached a point that even if Ella turns in her crew, she would face the same level of punishment. But there seems to be something more there as well, Ella is also a protector and willing to go down to keep her brother safe and it certainly seems that despite his objections he needs a certain amount of looking after.

Throughout “We Only Find Them When They’re Dead” #2, Jason is presented as kind of a naive optimist but with a hunger, a desire for more. Both his sister and his captain try to talk him out of the decision the crew is about to make, both out of love and protection. Jason no longer wants to be protected, he wants to be set free, to thrive. In the scene with Georges, the strongest in the issue, Jason explains that while they have a life that is safe and comfortable, he wants something more. He is sick of living his life with dead things, he wants to live, even if that means risking his life to do it. It also seems that there is something to Jason’s passion that inspires Georges, gives him a purpose to do risk it all. Of the four crewmembers, Jason’s motivations seem to be the clearest, space is an endless dead void and he has experienced death. Now he wants to see life.

In a way, the story of “We Only Find Them When They’re Dead” #2 is trying to find light in the darkness, which is done in large part by the art of Simone De Miro and Mariasara Miotti. While the colors of the issue might not necessarily be intense, they are almost overwhelming. Except for reds, most of the colors used to show life on the spaceship are darker shades of blue and yellow, creating a feeling of artificial lighting throughout the ship. It also helps to showcase who is existing in what part of the ship, with the deep yellows showing the glow of the administrative screen, dark purple of the coroner’s lab, and the green-grey of the ship’s hold creating a sterile effect. These colors helped to make the areas of the ship feel distinct. In a way, too, the coloring reminds us that space is always there, that if these ships stop working, the artificial lights disappear, there’s only the darkness of space. De Miro also does a stellar job with showing movement in the ships. While the crew members are all strapped down, the backgrounds of the scene indicate the intense movement of the ships, the transition into lightspeed, the force that these characters are experiencing on the day to day of a ship. De Miro’s art gives an idea of what life on the Vihaan II is like. The ship is cold, somewhat cramped, intensely lit, and yet despite it all, this crew is becoming a family.

“We Only Find Them When They’re Dead” #2 works hard on establishing the relationship of this crew, the fact that they are more than coworkers, they are dreamers in a job that doesn’t necessarily award that kind of thought. In this universe, space is a daunting endless void, a way to make money by exploiting the death of powerful celestial beings. But the crew of the Vihaan II (even if some of them are reluctant about it) dare to dream that the universe can be more. In today’s world, sometimes it’s nice to follow the dreamers.

Final Verdict: 8.5 Thanks to bold coloring and an intriguing script, “We Only Find Them When They’re Dead” #2 creates a bold team of explorers in the face of a cold daunting universe.