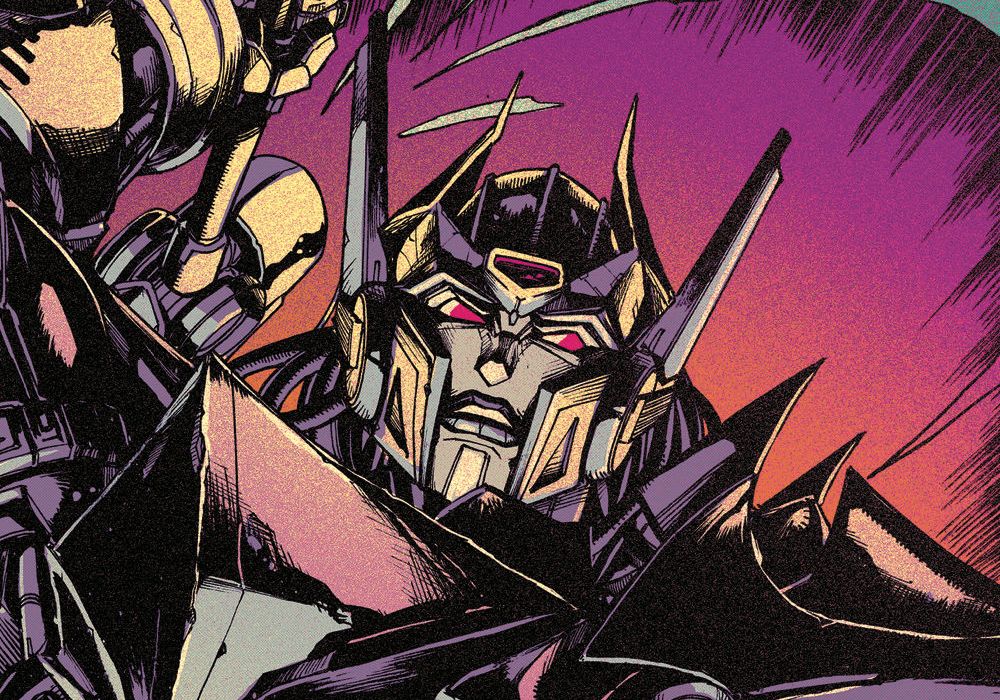 With the entire Universe drawing to a close, the Transformers titles have a limited time to wrap up years of continuity and deliver fans what they are seeking before restarting the line as a whole. With the advent of Onyx Prime and the rise of Unicron looming over the franchise, there is a certain weight the narrative carries. However, these threats don’t quite feel completely tangible or coherent yet as writer John Barber has begun inching forward with the ultimate conclusion bit-by-bit. Thankfully, the reveal from the previous issue got us that much closer to understand Onyx Prime’s ultimate scheme. How much closer will “Optimus Prime” #18 carry readers towards an endgame and will the series be able to carry tangible stakes before the finale hits? 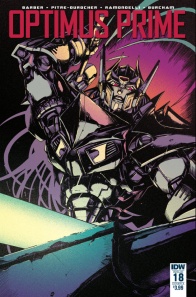 Written by John Barber
Illustrated by Sara Pitre-Durocher and Livio Ramondelli
Colored by Josh Burcham
Letters by Tom B. Long

“The Falling,” Interlude. All hope seems lost as Onyx Prime confronts Optimus—but why has Onyx returned? What’s his ultimate goal? Millions of years worth of mysteries are solved as the secret history of Onyx Prime is finally revealed!

While discerning certain robots in the Transformers franchise apart from others can be difficult, a Prime is supposed to be a cut above the rest of the pack. However, the current Transformers continuity has analyzed a history of corruption and abuse with the high-ranking robots that allowed for fascinating storytelling emphasized by the robot drama. I think when Onyx Prime was placed at the forefront of the Transformers Universe a couple issues ago, it became clear that he wasn’t joining the cast to drink a cup of tea–this is where “Optimus Prime” #18 enters center stage to finally establish clear stakes with the villain and show readers exactly where he stands and what he is capable of.

The overall structure of “Optimus Prime” can feel stiff with the abundance of flashbacks taking up so much of the narrative, but Barber had a plan in place when it came to Prime and watching him reveal his endgame makes for a wonderful issue. While the context for a different series and the shared Transformers Universe may be necessary to enjoy the comic to the fullest, asking readers to keep knowledge from the previous series is a lofty expectation from readers as a whole. While there is an explanation of what came before, the installment may not carry the same impact those reading only this series would most likely not have.

Of all the books currently making up the Transformers line of comics, “Optimus Prime” #18 has always been the tale carrying bearing one of the most unique art directions in the line. Josh Burcham’s bright, distinctive color palette makes up a large part of the approach which is assisted by Sara Pitre-Durocher’s precise and detail-oriented pencils. The Transformers franchise has done a tremendous job using Livio Ramondelli’s fantastic work for all of the major flashback scenes here. It is nearly impossible to mix up Ramondelli’s pencils with Pitre-Durocher’s as Ramondelli’s more simplistic, skeletal design gives the Transformers mythology and entirely different feel. The juxtaposition between the dual pencilers and feeling each artist is given the script allowing them to do their best work is a fantastic indication of Barber’s familiarity with the franchise and overall direction of the comics.

With two massive, Universe-spanning threats colliding into each other who desperately need to be defined, I’m glad to have read and understood what Barber is trying to do with the end of his portion of Optimus Prime. If there’s any criticism regarding the script, this flashback is too indulgent and too long. Barber should have taken his time crafting the story and not let the scene go quite as long as it did, as the issue became difficult to engage with overtime. Thankfully the dark nature of the story and cliffhanger towards the end of the issue picked the book back up again and shuffled the characters to the right places with ease.

“Optimus Prime” #18 does a wonderful job drawing a straight line between the past and present fo the Transformers Universe as a whole and setting up the rest of the threat in the series as something palpable and dangerous. I hope Barber continues to strike a balance as the title continues to wind down and going forward, it is time for readers to really get a huge payoff from a series loaded with flashbacks and promises towards final, explosive endings. With the threat of Unicron also looming over the franchise, I hope just as much care is doled out to give the character a backstory and plan. When taken as a whole, it does seem this comic achieved the emotions and had some things to say about the nature of evil as well. Some people (or robots in this case) are just always going to do the wrong thing when given the opportunity.