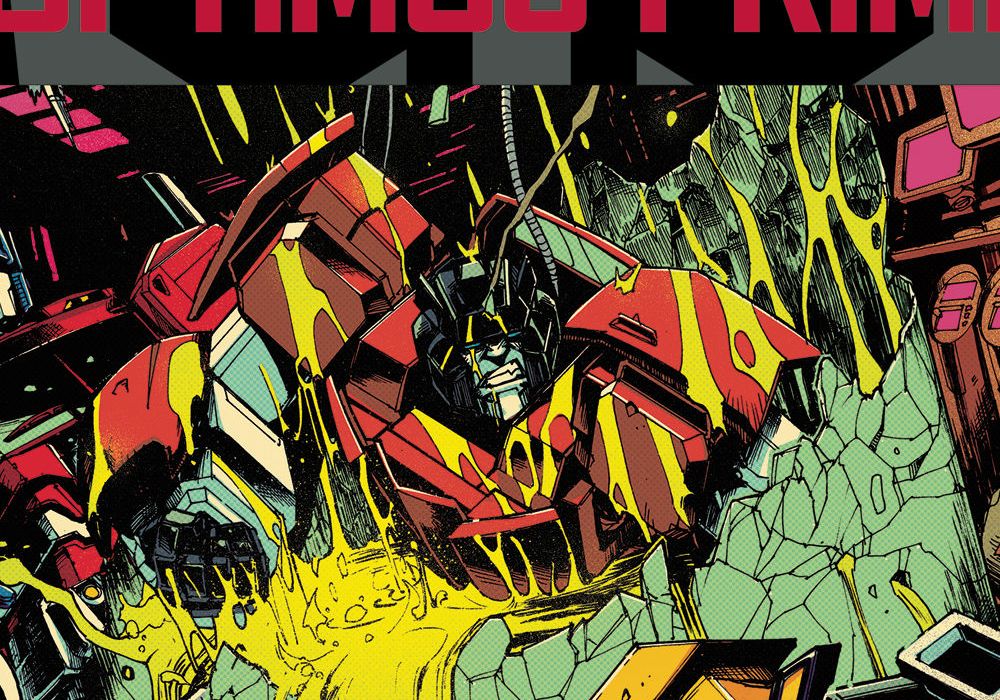 After eight issues of mostly solid storytelling, there’s something about Optimus Prime and company that has kept readers a little cold in the “Optimus Prime” ongoing series. The title has tried integrate the G.I. Joe characters more prominently than any other ongoing in the line that can be alienating to readers. In addition, Optimus Prime can oftentimes be the least prominent character in his own series. With a huge supporting cast of robots defending the Earth, writer John Barber’s attention is split between a great number of characters. This series doesn’t have the hero on an ongoing solo adventure but has morphed into a team book from here. With that in mind, we’re going to look at the latest issue and hope for some great Prime moments even with the solicitation teasing a story centered around Sideswipe. 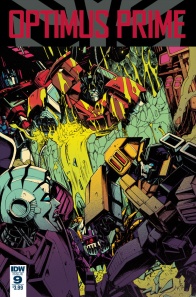 THE LIFE OF SIDESWIPE! A Junkion machine finally gives long-injured Sideswipe a new lease on life! But when his brother goes missing, Sideswipe and Arcee return to Cybertron—and nothing will be the same between them ever again.

This issue of Optimus Prime is an emotional rollercoaster examining a character that I haven’t been extremely familiar with up to this point. However, Barber really does deliver on showing the intense relationships that Sideswipe has to the rest of the cast here. Observing some of the finer points of this issue and trying to guess where the character is going to end up by the end is certainly thrilling. Barber also does a great job establishing who this robot is and how much the status quo of the overall line has changed since the latest IDW reboot of the dual Transformers books. Michael Bay and company have been hammering the Transformer Civil War for years now between Autobot and Decepticon up on the big screen and this issue sort of reminds readers how novel an idea it is for the overall Transformers line to really progress the way it has over the last couple years. The fact that I actually feel bad for the former Decepticon villains that are pounded into the dirt in this series really speaks volumes about well Barber has written the extended cast over the last couple of years.

While this issue certainly digs deep into all things Transformers and dives headfirst into continuity, some of the more casual readers are going to be lost. This installment does a great job of introducing Sideswipe for the first time and dramatically resolving the story in the space of one issue, but having that additional context does give readers some more weight. Some fans are definitely going to be saddened to see this series focus on something other than Optimus Prime again. At this point, I wonder if the comic should have been titled something else to simply better reflect the vision that Barber has for this book. While the Transformers property as a whole still feels like it is headed in the right direction, Barber has plans for this series and set of characters that feel so much more grand than just Prime himself.

Kei Zama’s pencils are extremely articulate even though they can be slightly muddled at times. Comprehending what exactly each robot is doing at any given time can be hard because so much detail and lines are detracting from your overall attention. It can be hard for a reader to shift their focus towards the overall panel when a staggering amount of detail is presented. That being said, there’s some abstract storytelling and a more creepy edge that this comic deploys with a great execution from the art. There are a few really strong emotional scenes in the comic that are touched on beautifully from Zama as well who makes sure the robots are looking cool and articulating their feelings. Josh Burcham’s green, yellow and black color palette gives this book an incredibly distinctive look from the other Transformers titles on the shelves. The colors also can detract the reader from some of the more prominent aspects of the comic where the attention should be focused with the bright greens, yellows and orange hues. The art in “Optimus Prime” #9 is very detailed but sometimes the reader’s focus can be drawn towards the wrong place.

“Optimus Prime” #9 moves the attention from the book away from Optimus Prime yet again but the haunting tale of Sideswipe isn’t something I’ll soon forget. Barber really takes the time to flesh out the world as a whole and show off the different direction this series has embarked since the IDW split. Examining all the changes he’s made to the franchise through the eyes of Sideswipe makes for a really effective issue that could get the tears rolling. At some point, Barber needs to be sure to get the overall story going faster and definitely needs to commit to Prime’s individual narrative but what the writer has accomplished with a lesser Transformer supporting cast member in this issue is nothing short of remarkable.

Final Verdict: 8.0 – “Optimus Prime” #9 is a haunting look at what could have been for the emotionally devastated Earth-based Transformers team.