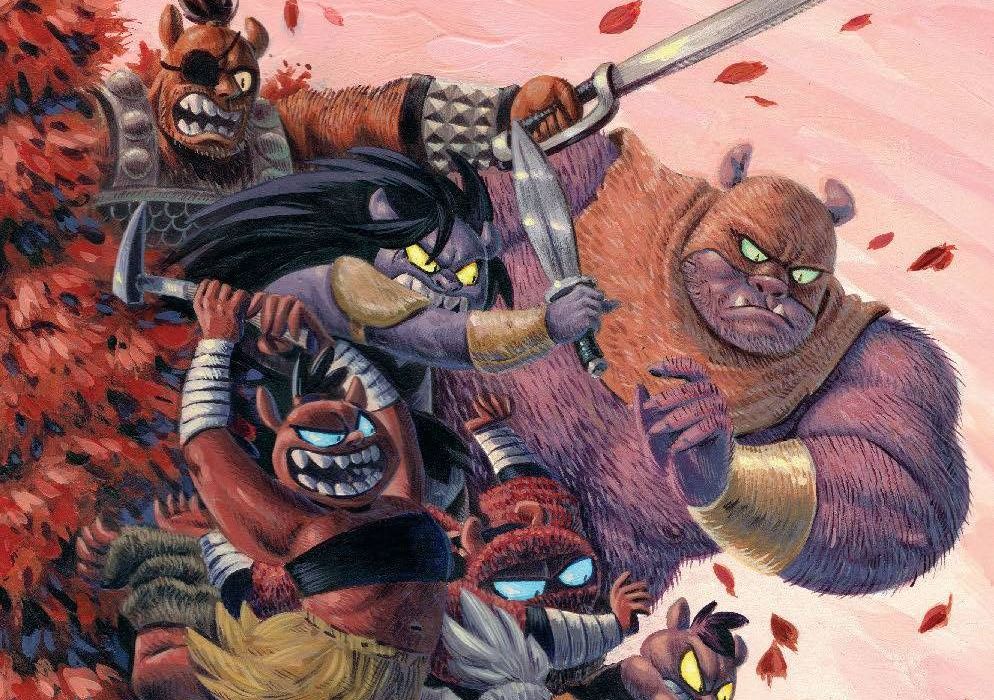 Orcs. Whether you know them from the Lord of the Rings movies as Sauron’s footsoldiers or from playing “Dungeons & Dragons,” they’re a recognizable species renowned for their strength. Well, now it’s time for a story from an Orcish perspective with a comedic take, created by cartoonist Christine Larsen. How will this look at Larsen’s Orc society go? Let’s read on and find out. 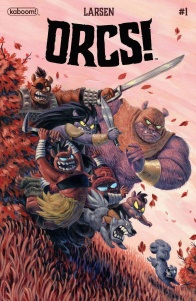 So let’s start with the obvious: “Orcs” is a comedic, cartoonish series with a lighthearted look at a group of Orcs. This is a good thing, making the comic a fun read for all ages. At the same time, it maintains the fantasy vibe with a good sense of humor, and brings us in to the Orc society.

Starting the comic off with the tale of an Orc adventurer brings us in to the story by using, well, a story. This makes us part of the listening audience along with the young Orcs, so we can quickly relate to them. The story itself establishes what the Orcs in this comic are like, including their adventuring spirit and ingenuity. It works well to establish multiple elements of the world for us, the readers, so we’re ready to meet the main characters.

This then leads us through the Orcs’ home, where we meet several key and side characters. Once more, this establishes the world and helps build the tone through both art and dialogue. “Orcs” #1 quickly introduces a number of characters with their own stories and plots the comic will likely follow as we continue through each issue, while letting us understand who they are and their relationships to one another organically.

When the plot starts rolling, we get more nice establishing moments and world-building. This includes the introduction of two elf characters who have nice banter, so hopefully we’ll be seeing more of them in the coming issues.

The story moves at a nice pace, with plenty of gags per page. The visuals and dialogue work together to enhance the humor and tone, showing us the Orcs in action against their greatest foes yet: squirrels. (Anyone who’s read a “Squirrel Girl” comic can confirm that squirrels are not to be messed with, which remains true even in entirely different comic book universes.)

So we have the characters, the world, and the story set nicely. That then begs the question: how’s the art?

Christine Larsen uses a very cartoonish style, which is fitting given her background and the overall tone of the comic. The features are all very round, which helps make the characters seem softer and more relatable, even when they’re large and muscular. The large faces help make the characters more emotive, adding to their voices and providing everyone with recognizable features.

The color work, also by Larsen, is soft and solid. While the surroundings and background use natural colors, like green fields of grass or earthen caves, it all matches the more fantastic elements. For a good instance of the more fantastical, we get a brief look at the Astral Plane; the way the Orc elder entering it seems to melt away into wisps and bubbles before we get a full-page panel showing us the Astral Plane is a nice transition. The plane itself is fulled with swirling light over a black, space-like background; even if the scene doesn’t go anywhere with it in the comic, it’s still visually engaging.

The color work also helps differentiate the Orcs from one another. They vary in tone from shades of grays, purples, and browns, adding visual variety to the Orcs. The Elves, too, are given green complexions, which actually makes sense given the forest environment they live in. It also helps the comic stand out from its fantasy contemporaries, which often tend to stick to a more Lord of the Rings design for its Orcs and Elves alike.

Larsen’s art style adds to the comedy of the comic, especially in the more action-packed scenes. Since the characters are drawn with such large features, the visual comedy comes easy to them. This works particularly well when they’re fighting the swarm of squirrels, including a nicely-drawn “Get it off me!” moment. The elves get their own fair share of visual comedy, mostly through the overly-dramatic gestures that one of them (Leonard) makes to accompany every movement, juxtaposed with his less dramatic companion.

In any other comic, I’d compliment the synergy between the writer and artist, but considering they’re one and the same in this one, all I can say is Christine Larsen does a fine job on both.

All in all, “Orcs” #1 is a good start to the series. It’s a lighthearted, comedic look at Orc life, filled with distinct characters and humor that shines through both the writing and artwork. If you want some fantasy comedy for your pull list, “Orcs” is a fine choice.

Final Verdict: 8.0 – A fun comic filled with plenty of great characters and a wide world to explore.