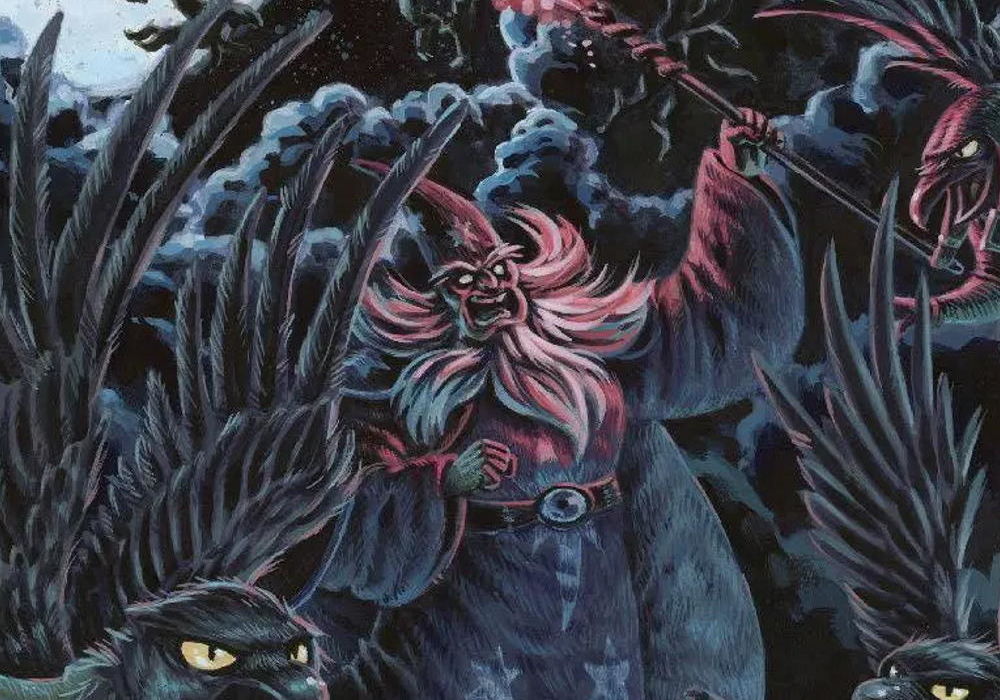 To the casual fantasy fan, certain traits go along with fantasy races. Dwarves are stubborn. Elves are fair. Orcs are evil, and so on. But why do we think these things? Why do we think that dwarves are stubborn? It seems like elven propaganda to me! The more interesting question is how do these creatures look when not viewed by the larger society? Perhaps what others see as “evil” is just chaotic good fun! Enter Christine Larsen and her world of Orcs! This year we get a chance to return. “Orcs!: The Curse” #1 is a delightful return to Christine Larsen’s energetic and chaotic world of adventures, creating a new threat without losing any of the fun. 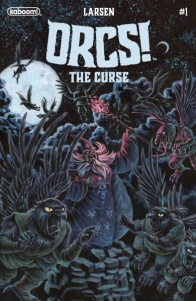 After returning from their travels and celebrating with a dance party, a prank gone wrong inadvertently unleashes something ancient and evil. Even worse, in a tower in the middle of a dark forest, a wizard with grand, sinister plans needs a real army, and his sight turns toward the Orcish tribe…

“Orcs!: The Curse” #1 is the follow-up to Larsen’s excellent comic of the same name from last year, a delightful adventure of the fantasy genre’s oft-maligned foes. While authors usually use orcs as evil fodder for a band of heroes to slice through on the way to saving the world, in Larsen’s world, Orcs aren’t chaotic evil. They’re just chaotic. While her characters might be a little rough around the edges, they support one another and are fiercely loyal to their own. They aren’t trying to bring about the end of the world. Rather, they’re looking for a little bit of gold and causing some mischief. It certainly helps that Larsen can successfully balance the tone of the comic. There is almost a slapstick element to her writing and antics. Pranks injure others, sure, but they bounce back from it quickly. If you’ve read the original series, it’s just a return to the fun as we see our friends dancing like maniacs, listening to stories, and continuing their playful rivalry. If you’re new to the series, Larsen does an excellent job of reestablishing the characters and dynamics of the first series. What makes this new series unique is that she is upping the stakes.

While the original series wasn’t devoid of conflict, most of it was incidental. Most of the humor of the original series came from the Orcs’ misadventures. While Granny dealt with a potentially world-ending threat, Pez, Bog, and their crew more or less stumble their way from one misadventure to the next. In “Orcs!: The Curse” #1, Larsen connects the Orcs to a broader world, enhancing all the work done in the original series. Instead of dealing with finding their way home, the Orcs have to face off against a Wizard who wants to take over the world, one who is expecting the bloodthirsty monsters of legends. Instead, he is mocked and given your standard mercenary contract. Again, Larsen’s script is a joy to read as we watch the tribe go against the world’s expectations. It’ll be interesting to see if the run of her sequel series involves the Orcs routinely defending their home from foes expecting bloodthirsty monsters. Still, the premier issue shows that we won’t have to worry about losing the fun of the series. From the script, to the character design, to how Larsen creates sound effects, “Orcs!: The Curse” #1 is fun the whole way through.

One of the delights of “Orcs!: The Curse” #1 is Larsen’s art, which has a cartoony element that perfectly matches the comic’s script. Larsen’s orcs aren’t without menace, they have sharp teeth and are various degrees of hulking, but they are also round, fuzzy, and delightfully expressive. We are treated to multiple group shots of the orcs dancing and partying throughout the first issue, reminding us of their good humor and love of chaotic fun. This is seen throughout the issue, from the way she uses sound effects helps add to the delightful chaos. Sometimes they are part of the crowd, sometimes they punch their way through the panels, and sometimes they are part of the fabric of the scene itself. Larsen has also stepped up the game in portraying magic. Between Granny’s incantations and the dark wizard’s spells, her magic has a beautiful use of colors and formless chaos. It’s not necessarily a vibrantly colored comic, but the energy or her panels more than makes up for it.

Along those lines, Larsen’s coloring and shading feels like an upgrade between the original series and “Orcs: The Curse” #1. This adds to the more significant threat of the Wizard and his minions without losing the fun of the designs. Larsen showcases this in the more elaborate action of the first issue, where Larsen treats us to a full-scale battle of the Orcs vs. a Crow monster. Again, we had some action in Larsen’s original series, but never to this scale. Like every other element of the issue, it finds a wonderful balance between the Orc’s chaotic good humor and the power that they convey. We’re getting more significant stakes and better action but not losing anything that made the original series special.

Finally, Larsen shows that while the Orcs are chaotic and mischievous, they have good hearts. Their desire to help the Crow people helps to set the tone for what I hope the rest of the book will be, Orcs helping those “Malevolent creatures” destined to help dark wizards fulfill their world-ending missions by supporting their freedom and giving them a safe home. After all, if orcs can escape fate, why should anyone else be?

Final Verdict: 9.0 “Orcs: The Curse” #1 is a delightful return to a wonderfully chaotic fantasy series, raising the stakes without losing the fun.