The plot of “Orphan Age” #2 mirrors the experience of growing up for many: it starts simply enough, then becomes much, much more complicated in a way none of the characters are prepared for. Beware: there are spoilers below. 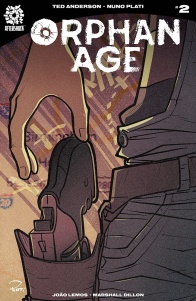 On the road to Albany. Stopping for supplies at the town of Mall. The importance of the gun. Everything’s for sale. Bargaining. What is it worth to you? What would you give?

The thing “Orphan Age” #2 does extremely well is, it gets readers up to speed who are just entering the series with this second issue. It illustrates its premise, which is familiar: a while back, all the adults died. Only the children survived and, as orphans, they helped raise each other. Now, roughly 20 years later, the world is an apocalyptic wasteland and the kids are older. Some even have kids of their own.

Co-creators Ted Anderson and Nuno Plati center their story around a young girl and her newfound guardians. The three are on the run from a powerful church who wants to burn everything in its path. But they’re going to need supplies for their journey. So, they head to the mall.

The benign mundanity of shopping at an outlet mall after the apocalypse is strangely sweet and uplifting. This shift away from the expected is welcome, marking “Orphan Age” as a tonally different story from the myriad other post-apocalyptic offerings we’ve gotten over the years. The funny thing is, if you took the visuals away, the weight of the dialogue would sit heavily on the reader – the discussion the characters have isn’t exactly lighthearted. But Plati distracts from that with an art style that’s bright and jaunty at first glance. There are clues there, hints of hostility for readers who study the panels and the looks on the characters’ faces. But it likely only leaves you with a feeling of danger that claws at the back of your mind.

The feeling gets stronger as we enter the second half of the issue. The first hint of a tonal shift is the shading and color palette used by João Lemos & Nuno Plati.

The first half of the comic was bright, with minimal shading. Now, it’s almost reversed, mostly shadow, with only a little light, though the overall palette is still warm tans with pops of orange and red. But the events that transpire over the next few pages are more like what one might expect from a genre story like this one.

Readers who saw the comical art style leanings, the brighter colors, and the potential for a more optimistic post-apocalyptic tale might be disappointed. But those wanting a book with a lot of the familiar genre trappings won’t be disappointed. Just like how some kids may feel growing up, just like other popular apocalyptic offerings, just like Sartre said – in “Orphan Age,” hell is other people. There are no zombies in this book. No vampires. Only the usual message we’ve come to expect in stories like this one. The real monsters are us.

The whole concept of “morality vs. survival” and similar ethical dilemmas and situations you’ve probably seen in other post-apocalyptic stories, but it doesn’t stop “Orphan Age” #2 from being a page-turner. Even outside of its hopeful beginning, its clean line art and manga influences make it visually stunning and stylish. It helps that Nuno Plati handles both the line art and some of the color work, along with João Lemos. A lot of the line art is done through color holds, rather than traditional inks. Even the panels, themselves, don’t have an inked border. It makes it a little strange why letterer Marshall Dillon wouldn’t do borderless balloons to match but, my guess is, it would’ve been too difficult for the balloons not to blend with other white elements while remaining within the limited color palette.

The down-to-earth lettering style for “Orphan Age” works for its tone. Dillon uses bold italics fairly regularly to show emphasis in conversation, but the style is otherwise fairly minimalist. No captions and few sound effects keep a realistic feel that works with the book’s genre and themes. It’s a little curious and unnecessary to end the issue with a quote, forcing Dillon to stray from his rigid style for something that doesn’t really elevate the story, but that’s more on the book’s creators than the letterer, and Dillon handles it well.

Overall, “Orphan Age” #2 is a well-crafted issue, using the art and subject matter as a distraction for graver things so the reader isn’t consciously aware of the rising tension until it reaches a fever pitch. There’s a thoughtfulness and reason to the title’s elements, and it works well for the book’s success.

Judging by the next issue’s cover and the character it features, we can expect the events of this issue to have repercussions. But it’ll be curious to see in the future where Anderson and Plati take us on this journey and what their intentions are for “Orphan Age.” Not every story has to break the genre and do something new, and simply entertaining the reader isn’t a dishonorable creative motivation. But if the creators’ truly hope to break new ground, they’re going to need more than angsty teens and a wasteland filled with questionable characters.

Final Verdict: 7.0 – “Orphan Age” #2 doesn’t exactly do anything new for the post-apocalyptic genre, but that doesn’t stop it from being a greatly entertaining read.