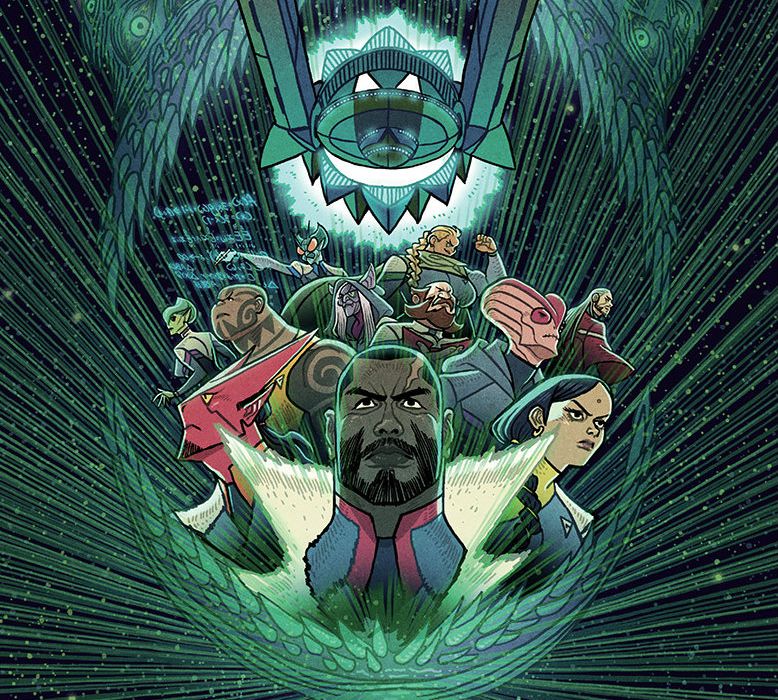 From the creative minds of “Chew” co-creator John Layman and “Immortal Iron Fists” artist and character design extraordinaire Afu Chan comes “Outer Darkness.” The book attempts to push forwards into the hybrid genre of horror/sci-fi more than anything before, with crazy adventures and incomprehensible terrors. Does this debut live up to that promise? 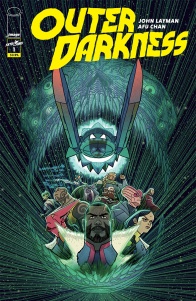 Sci-fi and horror collide in this new series from the co-creator of CHEW! Mankind has colonized the galaxy, but during our interstellar travels, we discovered a terrifying secret out in the Outer Darkness of space. Join Captain Joshua Rigg and the crew of the starship Charon as they encounter demonic possessions, hauntings, cosmic horror, and more! All-star writer JOHN LAYMAN (CHEW) and artist AFU CHAN (Immortal Iron Fists) are ready to let you know that outer space is terrifying.

Front and center of “Outer Darkness” is the protagonist Joshua Rigg, headstrong, brash yet utterly smart. Layman ensures you know this right from the start, with the prologue showing Rigg operating in a losing situation. One after another, Rigg witnesses many of his crewmates either possessed by supernatural forces or telling him that more of them have been sent off to their dooms. Layman depicts Rigg here as the quick thinking yet renegade leader, choosing to abandon the ship’s cargo and save the lives of the remaining crew regardless of the captain threatening to charge him with mutiny. This sequence ultimately defines him for the rest of the debut. Rigg is smart but has little respect for authority, and steers away from fatal situations. We later learn that this is stemming from the loss of a loved one to the Outer Darkness, giving our flawed protagonist not only a fully rounded personality but a motivation. It’s solid character work for a first issue, and Layman shows he clearly knows his stuff.

Outside of character work, Layman’s worldbuilding is firing on all cylinders. In many ways, this feels like it could’ve been a straightforward sci-fi tale in the hands of a lesser writer. The framework tale of the disgruntled space captain taking up reigns once more is not uncommon in this genre. However, when you look between the cracks, you start to see some neat ideas that feel both charming and terrifying. Having a bar reside upon a Japanese temple-shaped satellite is effortlessly cool. Getting the ship from the prologue ambushed by spirits that possess the crewmates, causing them to pulsate veins and spew out a locust-like swarm is creepy and unsettling. But having Rigg’s old ship now powered by the old god of a forgotten civilization, that requires gruesome sacrifices in order to power interstellar travel? Layman is combining these fascinating and horrifying ideas to create something that inspires pages of discussion and gives the plot a wholly original feel.

Afu Chan is a phenomenal concept artist, whose designs here are a big part of what makes this book feel so unique to any other in Image’s lineup. I’m reminded of Kirby in that the ideas presented in Chan’s work are intricate and powerful enough to fuel an entire series, yet are so frequently shown that they appear almost in every panel. From the first splash page, we see Rigg’s initial ship, a fantastic metropolitan train sporting primary colors, ambushed by some freakish spider and squid-like creatures, with enough gaping maws and abstract body parts that it could’ve been pulled from an issue of “Berserk.” Space Station Hirasuka, the bar in which Rigg inhabits midway through the series, is a sleek, dimly lit Japanese styled establishment, with the entire room being lit by a center neon light around the bar, and the wallpapers being decorated by subtle columns of calligraphy. And don’t get me started on the God Engine, the giant ram-skull with four parallel horns, bloodied red eye sockets and a full head of dark, eighties-inspired heavy metal hair. Layman gives Chan plenty to work with, and Chan takes it one step further by making every facet of this issue down right fascinating

It’s certainly worth pointing out how well Chan handles pacing and sequences in this issue too. From the start of the issue, you get a tactile sense of camera movement, from the way that the panels seem to pan down on Rigg looking out into the spiraling galaxies beyond his window. When the crewmate is infected with the swarming alien, we see Agwe start to rise from his chair in the background as she gags, before immediately connecting a punch to her jaw, seemingly knocking the infection from her and giving the readers a good visual sense of the characters moving through space. Even in quieter moments, like the back and forth between Rigg and Agwe in Hirasuka, Chan has both characters interacting with the environment around them. They aren’t simply staying as static figures and conversing, Rigg is receiving, pouring, and drinking a glass of whiskey, while Agwe is pointing out his alcohol problem before giving up and moving up to leave. It lends a sense of motion and immersion to the sequences, giving life to seemingly static images.

Chan supplies colors here too, giving us a vibrant, neon-paletted universe for the characters to adventure in. Scenes like the God Engine scene have a definite start-and-end feel to them because of their designated palette. The strongest light source in this scene is the God Engine, which emanates a radioactive and penetrating emerald green. Therefore, it makes sense that everything in this scene is tinged with this sickly green, giving us a solid scene shift and a palette that feels as uneasy as the characters living in it. Chan also uses some other great lighting techniques to give a stylish tone. In the Hirasuka bar, again the scene is lit by a sole light source, this time the rectangular orange light over the bar. It gives the scene a warm and inviting feel due to its color, but also a little shady and moody since it is the sole light source in the scene and invites a lot of shadows in the background.

John Layman and Afu Chan deliver their conceptual best in the debut issue of “Outer Darkness.” The script delivers a flawed yet interesting protagonist in Joshua Rigg to cling to, whilst establishing fantastic worldbuilding for the cast to interact with. This would all be serviceable, but it is elevated to the next level by Afu Chan bringing it all to stylish life in his art, creating a world that feels terrifying and wonderfully unique. If you’re looking for a sci-fi title that looks and feels different from the rest of the stands, look no further.

Final Score: 9.0 – “Outer Darkness” #1 is Layman and Chan firing on all creative cylinders, with all the God Engines and Japanese satellite bars you could ever need.