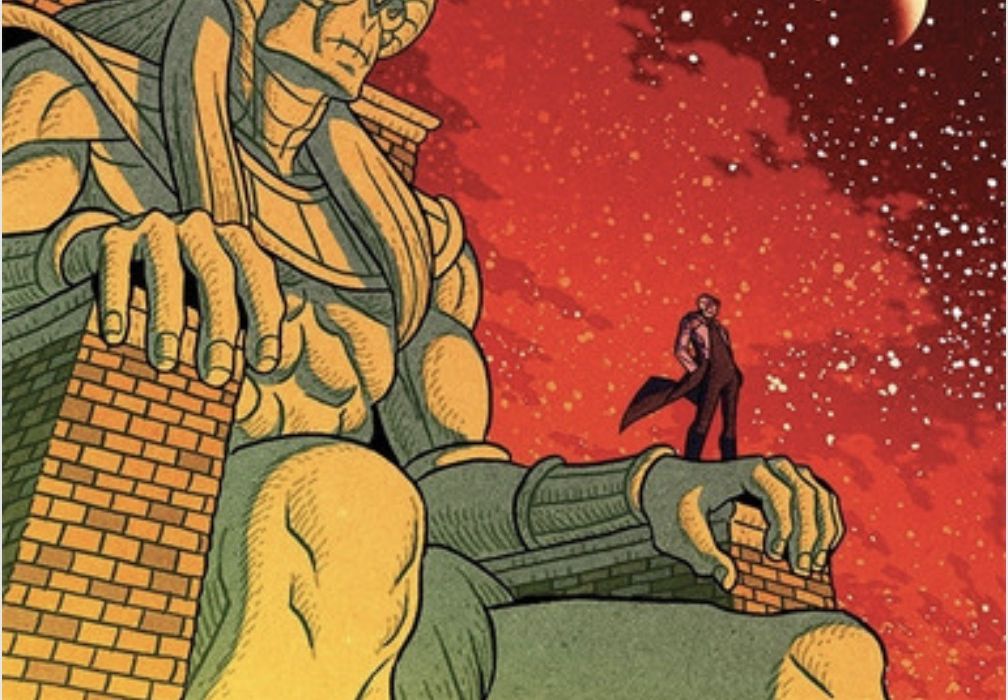 “Outer Darkness” #4 proves once again that sci-fi and occult storytelling can work together, with another imaginative, dark and fun tale in our wayward space crew’s journey. Spoilers to come. 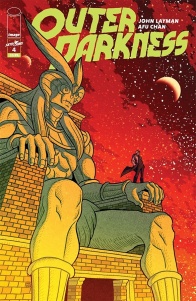 Cover by Afu Chan
Written by John Layman
Illustrated by Afu Chan
Lettered by Pat Brosseau
In this issue, we learn the sad tale of Chief Navigator Elox. What secret in his past might doom the crew of The Charon, and why does he hate everyone so much?

Sci-fi and fantasy or occult storytelling have mostly been relegated to separate camps. You generally like one or the other for very specific reasons, tropes, themes and motifs, and everyone else on the other side of the fence can stay there. Hard sci-fi often has no room for the fantastical, and you don’t find much advanced tech in sword and sorcery. “Outer Darkness” is a series that combines both, and with a dysfunctional starship crew battling demons in outer space, what’s not to love?

Layman plays with point of view in Issue #4 with Chief Navigator Elox in charge of storytelling, and the style shift doesn’t disappoint. See, Elox was revived out of the psychedelic termination point of all life that is the Outer Darkness, and while he claims to have no memory of where he comes from, who his people are or why he’s so darn good at his job, that’s not exactly true.

Because he used to be a god.

And he definitely misses the good ol’ days.

Layman and Chan are an absolute dream team on this book. Layman’s humor goes for the jugular in this book (sometimes literally), and the deep and wild imagination behind the character designs, magical tropes and general bad attitude of the entire crew is due to the perfect blend of storytelling chops and superb artwork. In Issue #4 we’re treated to a member of the frozen chosen, so to speak, whose demonic hitchhiker is woken up by a character whose promised psychotic break manifests just in time for a partial mutiny, all while Elox is doing his job, reminiscing about his unbounded power as a planetary monarch and hating everyone around him. Pitch-perfect.

Each crew member has distinct physical characteristics that speak to their inner natures (or in some cases, directly contrast them) and their functions aboard the ship, which makes for a visually satisfying sci-fi ensemble. Chan’s line is spare, with subtle shading and detailing only where it’s needed most. What’s most impressive to me, aside from the unique designs top-to-bottom, is that I’m never ungrounded – be it on the ship or hurtling through the unknown, Chan’s spatial awareness is clutch to rooting this narrative in a distinct sci-fi locale and keeping us on track scene to scene. Machinery, ship design, technology and function are all critical in a sci-fi narrative, and Chan nails each efficiently and with just the right amount of flair. “Outer Darkness” is a visual delight, and issue #4 introduces us to Elox’s home world, at once reminiscent of ancient Earth cultures as it is a little nod to Apokolips (everyone’s favorite Hell planet). Simply delightful.

“Outer Darkness” #4 feels like a coloring book for the damned, and I mean that in the most respectful way. Chan uses a broad swath of the rainbow throughout, and the pencil effects and textures lend a very subtle youthful, dreamy quality to the book. The deep contrast between the almost comforting glow of the instrument panels on the bridge and the midnight hues of the rest of the ship creates an artificial sense of peace and order, which is very quickly shattered by brilliant and often disgusting demonic invasions, perfectly rendered in concept, precise line and riotous colors.

Brosseau’s lettering is fantastic in this series, and issue #4 doesn’t disappoint with the advent of Elox’s narration boxes. Brosseau chooses to go borderless, as he does with the irregular balloons, and it’s a nice touch given Chan’s incredible level of detail. Brosseau’s choice of font mirrors Chan’s artistic control, with a slanted letter here and there to let us know things are bound to go off the rails eventually. Again. Always. There’s a very thin veneer of order in the midst of the chaos in this book, and Brosseau carries that subtlety through while maintaining a light, punchy quality with a rounded, friendly delivery system. It’s a hard balance to pull off, and Brosseau does so seamlessly.

Things are going from bad to weird to worse for the “Outer Darkness” crew, and I can’t get enough of this book. It’s got a dash of Yamato, a hint of Hellraiser and a whole lot of Star Trek, but it’s far more than the sum of its parts.

Final Verdict: 8.5 – “Outer Darkness” #4 boasts even more of Layman’s humor and tight storytelling, with superb art from Chan and fine lettering from Brosseau to elevate another great entry in this outstanding series.