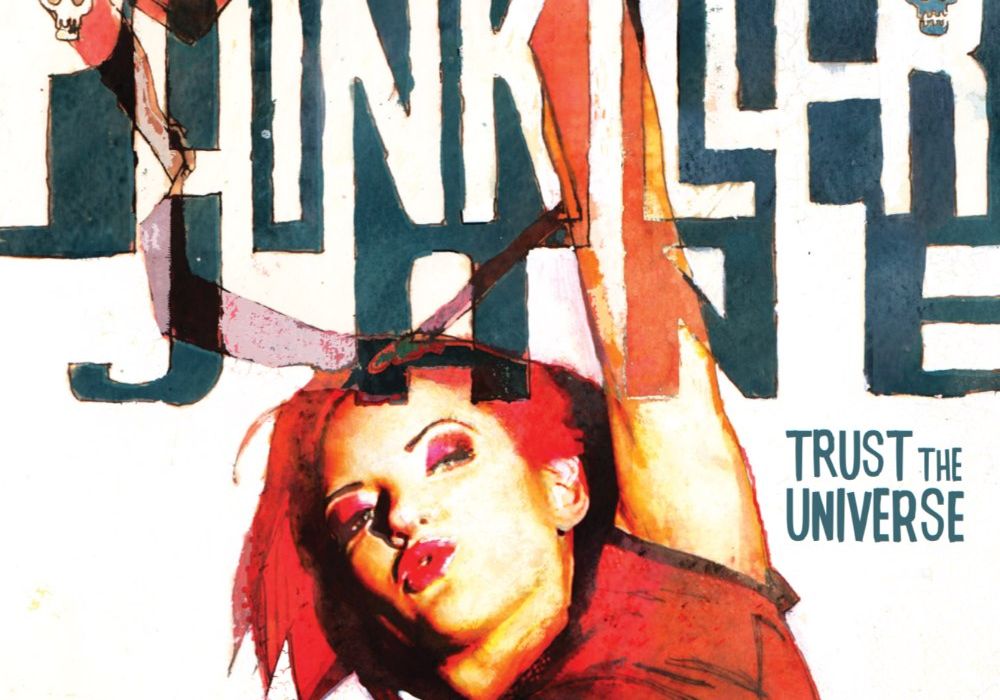 Painkiller Jane returns and she makes a new friend on her quest to fight crime in New York City. 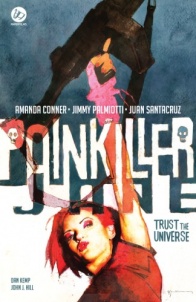 This is a hardcover original graphic novel that features a BRAND NEW 44 page Painkiller Jane story written by the award winning AMANDA CONNER and JIMMY PALMIOTTI -featuring the art of JUAN SANTACRUZ with colors by DAN KEMP and design and lettering by JOHN J HILL.

Prior to “Trust the Universe” this was a character I had no real knowledge of barring a few pop ups in various, thin, wiki articles. Jane was created by Jimmy Palmiotti and Joe Quesada as their take on the popular Bad Girl archetype of the 90s. With these reprints the book creates a historical context for the reader illustrating how the character has changed over twenty years from that zero issue in 1998 to ‘Trust the Universe’ in the present.

At first, ‘Trust the Universe’ is a pretty straight forward Jane story as she gets involved with shutting down a human trafficking ring. Things take a supernatural turn when the Monolith becomes involved. ‘Universe’ isn’t just the return of Painkiller Jane, but the Monolith as well. The Bigfoot of the Lower East Side is a golem-esque character co-created by Palmiotti with Justin Gray and originally published in DC Comics. Since the launch of Image, especially since the rise of the multi-media universe, whenever someone pitches their new superhero I tend to lose interest fast. The creative team introduce this even more obscure character wonderfully, showing the reader what he can do and the stories he’d fit into. The presence of Monolith doesn’t override Jane’s but adds a novel dimension to the story.

‘Trust the Universe’ is a 44 page original story. Palmiotti pitches it as an original graphic novel, but the page count places it more in the graphic novella range running shorter than recent Brubaker-Phillips & Phillips “Criminal” collections. If this story was published by itself within the range of normal Image collections, I wouldn’t say “Trust the Universe” would be worth the price. Which is why the two reprints and how they inform the character over the course of this collection creates a better sense of value for “Trust the Universe” as a book. The reprints recontextualize some spots in ‘Trust the Universe.’ By reading the zero issue first, it makes the moment when Jane remarks that the police academy feels like it was “a hundred years ago” land better. With the additional context of the zero issue, that line reads with a weight of history to it instead of reading just as straight pulpy hardboiled dialog.

Those 44 pages are not appreciably thick but they are well utilized by the creative team, for the most part. The creative team structure the tale into six parts of varying length, it would’ve made it a really enjoyable web strip. By demarcating scenes in this way it creates a feeling of momentum and shows off some really functional scene writing. Functionality is the name of the game for ‘Trust the Universe.’ Juan Santacruz and Dan Kemp’s art isn’t spectacular, save for one page, their style makes the book read like it is out of the mid-00s. Their art isn’t the most stylish of the bunch, but it is the most readable and easily understood. Santacruz consistent page design and line art with Kemp’s coloring makes for an interesting contrast with Palmiotti and Conner’s own work in the zero issue as well as the more stylized art by Steve Mannion and Paul Mounts in ‘Monsters.’

There is a pulpy quality to “Jane” you don’t see much these days. How that lowbrow aesthetic is expressed through dialog, mainly in the use of various female epithets by the writing team falters in a few spots. It devolves into bad cursing at times, that is using swears more for an assumed shock value in and of themselves which makes it read as juvenile instead of clever. Jane calling the undercover Detective Fernandez “bitch” with Fernandez replying that it’s “Mademoiselle Bitch” on a page turn as part of their flirty exchange is effective. The thinly drawn antagonists shouting epithets at Jane, or each other, less so.

The antagonists, a human trafficking ring led by Leo Pavel, is where efficiency and the attempt to add a bit of spice to their Big Bad runs into problems. As antagonists they are easily understood as bad people: they’re human traffickers! You don’t really need to add more, but they do. How the creative team add more to Leo Pavel is where things really fall apart. I can’t tell if he is supposed to be a satire of post-Sopranos gangster as a new peak of criminal-man-childishness, or if he has some kind of intellectual disability. Those wildly different reads are born from how infantilized the character is presented. He is introduced playing a videogame, consistently defers to his Mother, and acts like a petulant man child as he goes on a shooting spree. If it is the former hypothesis, it needed more page space to come through. If it is the latter, it reads as exploitative and poorly done. Trying to make the criminals into more than generic ones is the one real executional short coming of ‘Trust the Universe.’

Judging by this collection, and the others I received for backing, “Jane” stories are fairly standard crime narratives mixed with a Simpson-Bruckheimer sensibility and excess. Things get violent and bloody, ‘Trust the Universe’ is no different. How that violence is presented however is. Due to her healing factor Jane is presented like a female John McClane action figure: unkillable but bleeding. Except, with “Jane” rooted in Bad Girl aesthetics, Jane becomes Sexy John McClane, bloody with a breast hanging out – in the case of “The Price of Freedom.” That doesn’t happen in ‘Trust the Universe’ she is beaten but not made an erotic spectacle. In general the story doesn’t fall into the Bad Girl gaze of ludicrous eroticism. When nudity and other moments of scantily clad figures, briefly, appear it happens in a natural space and not made a spectacle.

‘Trust the Universe’ is a good not great comic, everything about it is solid but nothing really jumps out as spectacular. When paired with the reprints “Trust the Universe” becomes a great introduction to Painkiller Jane and the stories she finds herself in.