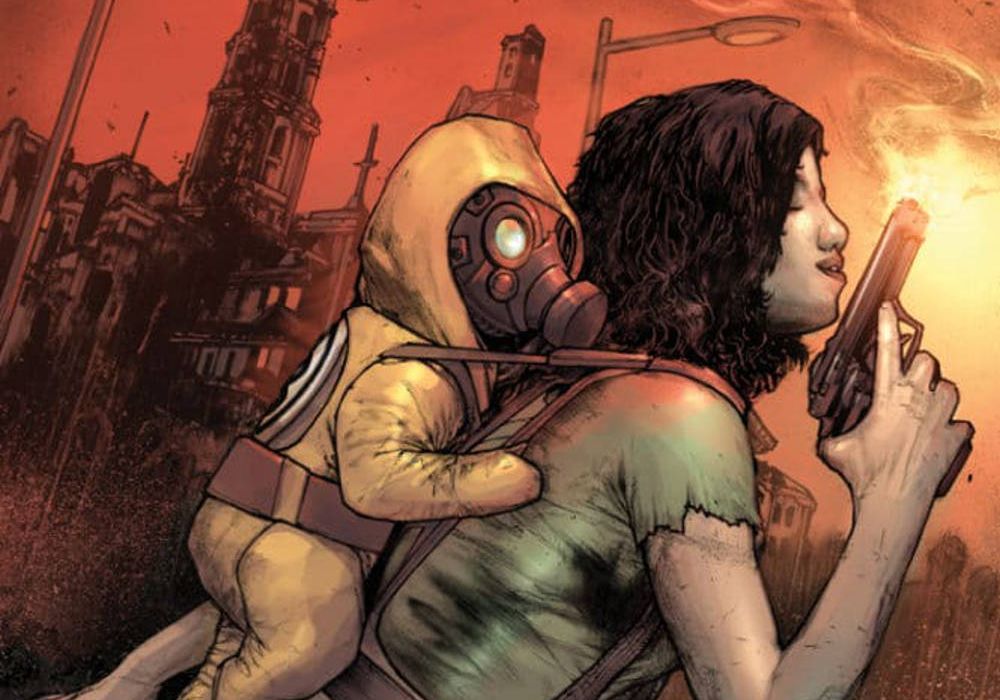 I’ve always been aware of Jonathan Maberry’s works like “V-Wars” and their popular reputations, but I’ve never dipped my toes in. With “Pandemica” #1, this proves to change, with a backdrop distinctly political as a virus ravages specific ethnic groups whilst leaving others unscathed. What we get is something not quite groundbreaking, but interesting. 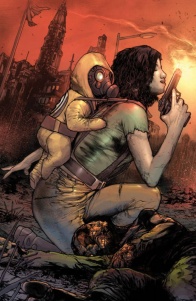 The scale of Maberry’s work in this issue is impressive, but it can be somewhat overwhelming at times. Our focal protagonist, from what I can gather, is Doctor Moses Katz, a former government worker with the guts to propose that the virus isn’t a random act of God, but fully purposed by human hands. He’s interesting as a provocateur and has the attitude to back it up even outside of the interviews and conferences he engages in. Maberry makes sure he’s a good leading character who always has the facts to back up everything he says, however the nature of what exactly he does is a little ill-defined or underdeveloped, to the point where I wanted to root for him, but didn’t really know what to root for. The rest of the cast falls in the same category for me. The most promising support is De’neesa, who has a great realist attitude that balances out Moses and seems to have some basic military training as she kicks and punches her way out of a kidnapping. Again, what exactly she does and her motivations are hazy. The real icing on the cake is the implied history that everyone has that Maberry expects people to figure out in the first issue. While it’s always good character-building to show that each individual has had a past prior to this story, dropping the fact that everyone seems to have a connection to the antagonist Loverboy, who seemingly died in the past and had connections between De’neesa and another completely new character named Chick is a whole other level of overwhelming for your very first issue.

Maberry does do tension pretty well in this issue, however, which is especially true when you take careful notice of the timestamps at the start and end of the issue. From the moment we see the newscasts of bodies dying from viral causes, especially when the narrator notes “The death toll among people of color is wildly disproportionate to white deaths”, gives the reader a sense of unease that continues to build as Moses and the rest of the cast start to uncover what is truly behind this. Maberry builds the tension well when Loverboy and his group of associates discuss offing Moses, which works especially well with how sleazy and terrifyingly pleased Loverboy is to be doing his job. Unfortunately, that scene is undercut by some heavy-handed villain dialogue, like the back and forth between Loverboy and the ‘boss’: “We need this to go away, Loverboy.” “Go away big or go away small?” “I don’t tell a chef how to sear a steak.” (On a personal note, I’d like to add that I always tell them medium-rare). From here, Maberry keeps the slow boil going for the rest of the issue, ending on a sudden yet intensely satisfying POP of a plot twist on the last page that will undoubtedly bring back readers for more. It’s a well-structured book overall but falls short in some small moments.

Alex Sanchez has a solid gritty style that works well for the tone this book is going for. Every page has the feel of a claustrophobic and heavily industrialized cityscape, which gives more credence to the idea that the virus is manmade and destroying a natural order. The opening pages of the newscasts are especially intense, as Sanchez draws masked faces treating wrapped up dead bodies, who are all uncomfortably shaped to the point of looking like farmed stock. On top of that, the use of lots of messy, ill-fitting medical uniforms gives a great sense of unease to the readers, especially as we can visibly see the discomfort in these workers’ eyes and expressions. Moving throughout the rest of the issue, we can see Sanchez using heavy shadows in facial expressions to imply villainy or shady motivations, as opposed to the less-hatched moments with Moses and De’neesa. It’s pretty simple but clever artistic work that gets a good sense of tone across.

Sanchez can handle emotion well in most of the dialogue-heavy scenes that he does, however, the level of detail he adds can sometimes mask the fact that there’s little actually going on with the character’s face. Moses Katz is a prime example of both these ideas. Sanchez handles him superbly, for the most part, giving him wry, smug confidence in his first interview that eventually melts away to a determined annoyance as he finds out he’s being hunted. However, a lot of other scenes he’s in, he looks like a cold talk show host or he isn’t even facing the camera at all, which makes it hard to get a solid connection with him. De’neesa is perhaps the most expressive of the characters, who can handle being cynical to being highly emotional in a fight, but Sanchez seems to have trouble keeping her facial proportions consistent from panel to panel which can be a bit jarring. The rest of the supporting cast is a little more consistent, but only because they all bear variations on the same satisfied, smug grin that Moses championed in the interview sequence.

Jay Fotos colors here and is technically a superb colorist when you look at the nitty-gritty. The cityscapes are a mix of muddied shading and rough texturing, the hospital scenes are pierced by a clinical artificial light that makes them uncomfortable, and any instances with blood looks splattered, visceral and realistic. The only problem is that the overall palette is overall boring. Everything is washed out and beige-looking, make the issue slide in next to the hundreds of other generic apocalyptic/viral horror stories out there. The indoors have a weird, yellowed tinge which perpetrates every scene except when Moses is out in the rain, which admittedly adds to the uncomfortable tone of the book but wears thin pretty quickly. The only instance that I loved was the final page where the scene and tone are drastically different, with visceral reds and beautifully painted lighting reflecting on the clouds in the sky, so if this is the scenery that will continue going forward, this problem will be addressed. However, it’s all over this issue and doesn’t leave a good first impression.

“Pandemica” #1 isn’t reinventing the wheel, but it will definitely satisfy fans of these kinds of viral horror comics. Maberry does some solid character work and handles tension well, and Sanchez is great at handling the overall tone. There are just too many shortcomings to make this stand out from the massive genre this book harkens from. If nothing else, the final plot twist shows a lot of promise for the series going forward, so check it out if you’re absolutely into this type of genre fiction.

Final Score: 6.0 – “Pandemica” #1 has tons of potential to be great, but numerous shortcomings keep it from reaching that level