This charming double-sized debut issue of writer Brian K. Vaughn’s new ongoing series about newspaper delivery girls that takes place in 1988 Cleveland is one of the best issues of the year. With Cliff Chiang on art and Matt Wilson on colors, “Paper Girls” #1 is gorgeously brought to life and is comparable to the greatness and potential that was Vaughn’s debut chapter of “Saga”. 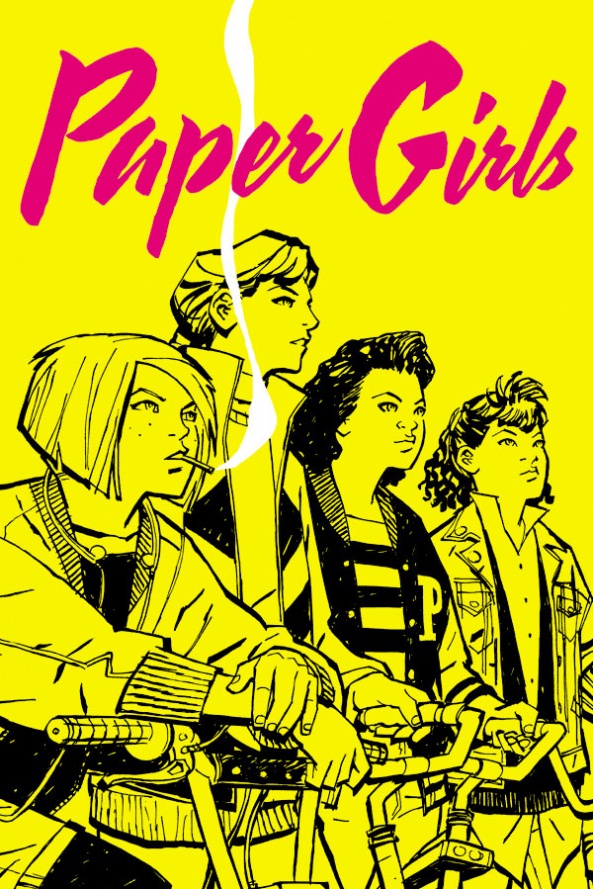 SAGA writer BRIAN K. VAUGHAN launches a brand-new ONGOING SERIES with superstar Wonder Woman artist CLIFF CHIANG! In the early hours after Halloween of 1988, four 12-year-old newspaper delivery girls uncover the most important story of all time. Stand By Me meets War of the Worlds in this mysterious young adult adventure, starting with a spectacular DOUBLE-SIZED FIRST ISSUE for the regular price of just $2.99!

Like the first issue of his instant classic “Saga” series, Brian K. Vaughn makes us care about his characters in “Paper Girls” #1 from page one to the intriguing final page. Each of the four young paper girls have individual personalities that are effectively and endearingly expressed through Vaughn’s dialogue, Cliff Chiang’s singular artistic style, and Matt Wilson’s deliberate and emotional use of color. Erin, who appears to be the main protagonist, is the most complex of the group. Vaughn builds her into a complete character who stands out from the rest of the group in a way that is breathtaking. He writes her and the other characters in such an intelligent way that does not minimize their experiences as that of “only children”. These girls are strong in the face of obstacles both emotional and physical. We instantly care about them and their futures.

We’re introduced to Erin on the opening pages where she’s having a strange recurring dream. It’s the morning of November 1, 1988 and it’s her first day of delivering newspapers in her neighborhood. Vaughn is surely going to revisit this strange dream that could possibly tie into the device we see on the closing page. Vaughn is known to build a winding tapestry of a story and “Paper Girls” #1 already promises twists and turns that we won’t be expecting as this series evolves. This small town in Cleveland, Ohio has many secrets and this cast of young girls seems to be the perfect bunch to solve mysteries that have only been hinted at in this behemoth of an issue.

One of the main reasons that Vaughn is so successful at building this world of “Paper Girls” so quickly and effectively is the dialogue. Judging by their interactions with each other, they are complex, resourceful, empathetic, and cool under pressure. This comes through in the natural dialogue that does not always explicitly reflect their attitude or state of mind. Each girl’s personality, whether they hide behind bravado or attempting to impress the others, reveals a kid who is just trying to survive in a world with dangers both local and global that are just waiting to affect them.

Vaughn is fortunate to have such a sterling creative team on “Paper Girls”. Artist Cliff Chiang, who is joined by his “Wonder Woman” collaborators colorist Matt Wilson and letterer Jared K. Fletcher, contributes an epic aura to such a personal story. The two page splash of Erin riding away from her house on a bike with her newspapers is both ill-omened and innocent. Here is a girl whose world is about to change in both believable and inconceivable ways.

Chiang’s distinct faces of each girl are expressive and complex. Subtlety shines on every page and begs a “bravo!” from the reader. In one particular panel, Erin is impressed by badass Mac’s defiant words. Erin simply says “cool” in response and her expression relays awe, respect, and friendly envy. Innocence not only emanates from Erin, but from the rest of the girls as well. Chiang is joining Vaughn in creating these characters and getting us prepared for the amazing and the unexpected.

Chiang and Matt Wilson have worked magic together in the past and they continue to astonish with this collaboration. In “Paper Girls” #1, Wilson has a distinct color palette that is rich and delightfully foreboding. The juxtaposition of the joyous and the fearful unknown in Wilson’s colors comes through in both the bright and natural hues. The bright purples, reds, and yellows of the opening dream is colored to convey something scary, yet also surreal and nonthreatening. Wilson’s coloring is an expression of life’s mysteries and its awe-inspiring unknown possible futures. The lights of a police car blaze with an alien glow while the girls’ discovery in a house still being constructed appears realistic and subdued in color despite its strange appearance. Wilson brings this story to life in such a complex way and is essential in the rousing success of this comic book.

“Paper Girls” #1 is not only one of the best issues of the year, but could possibly be the best debut of the year so far. The premise may seem unconventional and unexciting, yet Vaughn, Chiang, and Wilson defy us to not be entranced by these characters residing in 1988 Cleveland. There are reveals and an ending to this issue that are pregnant with endless possibilities and an array of possible combinations of genres. You’ll be charmed and riveted from the first panels to the final splash page.

Final Verdict: 10.0 – This issue is the embodiment of a perfect comic book. Story and art meld together both effortlessly and with extraordinary love. The next “Saga” just happens to be written by the guy who writes that particular space opera.