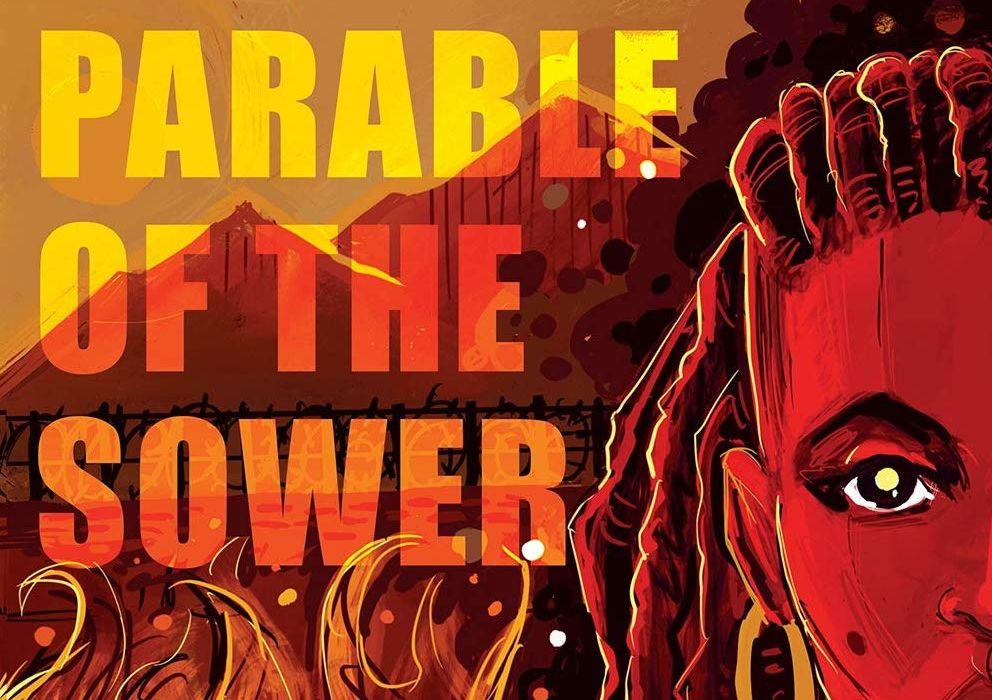 Damian Duffy and John Jennings garnered an Eisner for adapting the legendary Octavia Butler’s “Kindred,” a searing look at US antebellum slavery. Duffy’s adaptation and Jennings’ art return for Butler’s “Parable of the Sower” (Abrams), bringing her bleak but ultimately hopeful dystopian tale from 1993 to graphic novel audiences. Will the stunningly prescient “Parable of the Sower” prove as effective– or even more potent– than “Kindred” was to its many fans? I argue the latter in this spoiler-free examination. 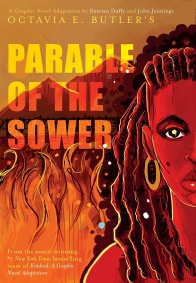 In the year 2024, the country is marred by unattended environmental and economic crises that lead to social chaos. Lauren Olamina, a preacher’s daughter living in Los Angeles, is protected from danger by the walls of her gated community. However, in a night of fire and death, what begins as a fight for survival soon leads to something much more: a startling vision of human destiny . . . and the birth of a new faith.

So many good comics and graphic novels merit broader attention that I rarely waste my time and words as a critic on works I’m not effusively enthusiastic about. Yet I have to admit that I surprised even myself to find that I was lukewarm on Duffy and Jennings’ adaptation of “Kindred” at first when it came out in early 2017. In retrospect, I better understand my reluctance, which explains why I feel so differently, so moved, as I read “Parable of the Sower,” which paints a dark future consumed by global warming, inhumane walls, brutally divided peoples, exploitative pharmaceuticals, profiteering schools and police, reactionary populist presidents, and desperately ineffectual escapist religion. (Yes, that would be us.)

On the surface, there was much to love about “Kindred” for a reader like me, facts which hold true for “Parable of the Sower” as well. Both are, of course, originally penned by Octavia Butler, a far before-her-time Nebula and Hugo Award winning sci-fi writer who, in melding imagination and politics, trail-blazed feminist afrofuturist vistas for the likes of Nnedi Okorafor, N.K. Jemisin, Tomi Adeyemi, Janelle Monae, and Ava Duvernay. As translators of Butler into comics, Duffy and Jennings are intellectuals as much as creators, and they have brought artistic intention as well as social vision to their projects. And “Kindred” blended that kind of dark fantasy that comics are uniquely suited to depict and the historical fiction that moves readers to eye-opening realities that reverberate in the present, about the horrors of slavery and evils of white supremacy and patriarchy. All of that is perfect fodder for this critic.

My initially tepid response to the “Kindred” adaptation, though, came from knowing all these facts about why I should love it, and yet finding the storytelling style of both Duffy as an adapter and Jennings as an artist somehow discomfiting. I remembered experiencing Butler’s novel about a modern Black writer, Dana, who time-travels back to the lives of her enslaved ancestors, as a psychologically absorbing experience, in sentences like, “The possibility of meeting a white adult here frightened me, more than the possibility of street violence ever had at home.” My mental rendering of Butler’s story was thick with subjectivity and epically filmic in its visual imagination.

However, what I found in “Kindred”–and I’ll get to “Parable of the Sower” soon–deflated my expectations at first, as Jennings maintained an almost fixed tight focus on facial close-ups and what I perceived at first as a muddy palate and frenetic line that diverged far from the cinematographic dynamics and moonlight-soaked images I had in my head. In the adaptation from prose to comics, it seemed to me Duffy had dispensed with the dramatic pacing that made Butler’s book so revelatory, instead cramming and crowding events in to fit the whole story like a “Classics Illustrated” bit of homework. Though I recommended “Kindred,” I admit I was somewhat disappointed.

However, I’ve changed my tune about “Kindred,” and here is where I think the really special aspects of “Parable of the Sower” come to the fore, both in contrast and in similarities. When I reread Butler’s original texts, I was surprised to find “Kindred” much more in-your-face and dropped-into-the-action than I remembered it. It was exactly because Butler wanted readers not to ease their way in but to be out of control, thrown in, searching hard to get our bearings while trying to cope with an unthinkably horrible reality… just the way Duffy’s adaptation hurls readers into a gothic monstrosity of circumstances with no time without tension. And returning to the unsettled, quivering psychology of Butler’s narrative suddenly made new sense of Jennings’ visual decisions, that tightly boxed-in concentration on the raw and tense expressions on faces and between characters. In ways I hadn’t realized, Duffy and Jennings mirrored Butler’s sharpness of style, cutting like a razor not to rehash history or re-inscribe too-familiar slave narratives, but to push a hard recognition of uncomfortable realities.

The doubly revelatory thing about “Parable of the Sower” is that once again, Duffy and Jennings find a visual analogue to Butler’s prose style, but in this story it’s a style that is significantly different and so appropriate to this more globe-spanning story. In the dystopic world of “Parable,” Jennings breaks free from confining panel borders and close ups, this time stretching out to give us scenes of barbed walls, occupied churches, marked-up maps and 3-D floorplans, and zombie crowds, huddling survivors, and grieving lovers. Jennings’ gift for channeling the color boldness of a Faith Ringgold or the energy of a Basquiat, while further expanding a distinctive Black comics visual aesthetic for which he has become a curator, propagator, promoter, and creator, get exhibited in “Parable.”

That visual range is essential to the kind of story “Parable of the Sower” tells. Lauren Olamina, the protagonist, survives in Los Angeles area 2024 afflicted with a “hyperempathy disorder” that makes moving around her walled-off neighborhood surrounded by suffering people difficult (and worth a content warning for the sexual abuse and violence rampant in the world). Her father’s an active Baptist preacher, but within her, Lauren has already rejected that faith for a construal of God and religion she is creating on her own, called Earthseed, whose tenets and truths become part of the book’s discovery. Without revealing too much, the plot has Lauren birthing these beliefs through the crucible of neighborhoods destroyed, characters made destitute, and the fanning of faint hope through Lauren’s agency to change and create.

Duffy and Jennings have risen to the challenge of Butler’s more mature, multivocal narrative in “Parable of the Sower,” as well as her later “Parable of the Talents,” where the author at the height of her powers (“Sower” was her tenth novel) conducted a symphony of disaster and dystopia, politics and division, stagnant religion and insurgent belief, warfare and love.

So I return to my own visceral experience of reading “Kindred” and “Parable of the Sower,” and I recognize that I can’t rely on old, comforting tropes and vessels like I often do in reading comics, like the endless parade of postwar noir anti-heroes or the Jeff Lemire paternal sentimentalism or the reassuring visual anchors of manga art or Frank Miller-isms or something like that. In re-presenting Butler, Jennings and Duffy transport me into unsettled and unsettling stories, anchoring me not in mainstays familiar to me, but forcing me to face new confrontations and find new sources of comfort.

These days, many of us need comics to do that.