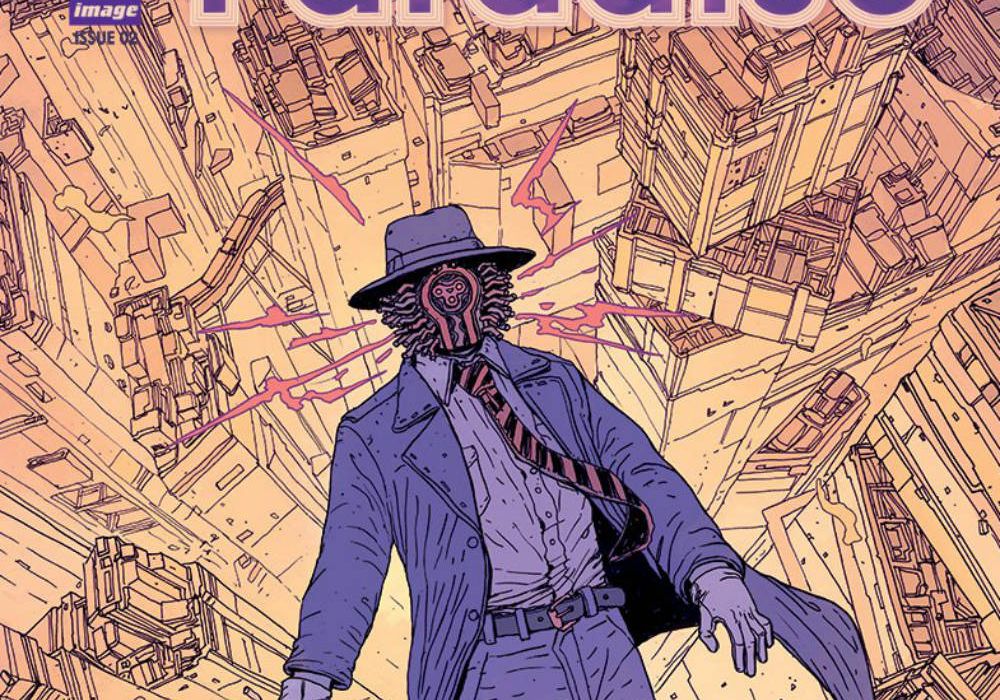 Danger lurks down every alley and lines every city street, plus we catch a glimpse of the time before. Read on for our review of “Paradiso” #2, which contains Minor Spoilers 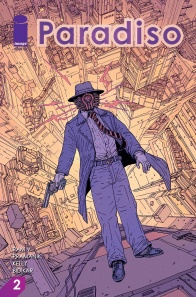 Whispers of the Pneumas have brought Hazard to Aquarius. Noira realizes that she’s in deeper than she would have liked. And, in the aftermath of the attack on his transport, Jack tries to find a way into Paradiso but wanders into a close encounter of the weird kind. Powerful forces are on the move in Paradiso City, but to what end? Yeah, there’s one thing you’ll learn about ‘Diso soon enough. The stories you hear-especially the scary kind-tend to be true.

The first issue of this series dived straight into the complex sci-fi world of “Paradiso” without giving an inch of space over to unnecessary exposition. Here, in the second issue, that dizzying pace is upheld, but the context of the narrative rewards the reader in a satisfying way. It almost feels like writer Ram V is giving us the opportunity to experience this world in a way similar to the protagonist Jack: once you accept the strangeness of the world and become unafraid of getting lost, the path becomes that much clearer.

We begin the issue with a prologue of sorts, one that gives us a glimpse of Paradiso as it once was: a thriving city of tomorrow. We see it in “The Great Before” as a major technological milestone is about to be surpassed. Dev Pramanik’s wonderfully detailed art helps to drive home just how different this is from what we see in the present day. The throngs of smiling, hopeful faces; the brightly colored scenes of ticker tape parades and spotlights lighting up the sky makes it feel like New Year’s Eve. Entirely appropriate, as this is an occasion that’s waving goodbye to the old, and ringing in the new.

Through two full-bleed pages, Pramanik shows us the same, Times Square-esque central hub of Paradiso over 330 years apart. In two pages we see the carnage of a world ravaged by who knows what. The impression is that whatever happened on that night all those years ago that devastated the city in a way that it’s never recovered from, but the way that the book cuts from hope to dystopia in a single page turn is more effective than leading us through exactly what happened. Maybe the events of that night will be revealed at some point, maybe not, but we know all we need to at this time.

And therein lies the beauty of “Paradiso.” This second issue highlights this point in a stronger way than the first issue, and declares the intent of the series moving forward: this is a series that is unafraid to show you just enough for you to understand what’s happening, but perhaps not why it’s happening. Much like wandering the streets of a brand new city, everything is familiar and strange at the same time. There’s a sophisticated narrative structure to this book that underlines that sense of being a stranger in a strange land, and much like the characters themselves, you find your way a lot easier if you give yourself over to it.

From the jarring time jump of the prologue, we slow things down and catch up with the multiple plot threads that span outwards from each other before contracting in interesting ways by the end of the issue. We see the aftermath of the car crash Jack was subjected to, as well diving deeper into his greatest fears about that night long ago. We get a name for the beast that haunts his nightmares – Watcher – and we see just how and why his fears are validated. We also get to see just some of the fantastical horrors that await visitors to Paradiso, when Jack falls foul of a malicious fog that manifests his worst fears. It feels weirdly appropriate that among the first things that the city subjects Jack to is a malevolent being that exposes his darkest secrets.

We also see the other side of life in Noira, the scavenger that is doing everything she can to get into Paradiso, and the lengths she’s willing to go to and the people she’s willing to deal with in order to get that chance. If anything, Noira is the more fascinating character here, as her genuine struggles to get that which Jack has achieved so effortlessly puts Paradiso as a city into appropriate perspective. This is a city with an ecosystem designed to keep you out, it would seem, but also one with the illusion of greatest reward once you’re in. Again, you can’t help but feel a comparison to the complex narrative of the book itself.

With this second issue, we find ourselves deeper into Paradiso than before, in more ways than one. We see the past come back to haunt the present in very literal ways, reminding us that you can’t escape your history even if you try. Noira’s plight is also a reminder that you’re judged on that history too (or at least judged on other people’s perception of your history). “Paradiso” #2 builds on the narrative in some rewarding ways, and Pramanik’s art – from that full-bleed page turn to the nine-panel grid showing the subtle shifts of that haunting fog, this is a gorgeous looking book. Shout out to the colors of Dearbhla Kelly too, whose use of a vibrant neon palate accentuates the danger in any given scene when it’s used, cutting through the darker tones of the rest of the book like a jolt of electricity through your spine. Don’t sleep on “Paradiso,” this is on track to be one of the greats.

Final Verdict: 8.0 – The mystery deepens as we and the characters delve into the city of Paradiso