After 11 issues it still isn’t weird that Peral Tanaka calls her Dad “Papa.” 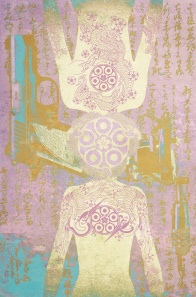 Written by Brian Michael Bendis
Art by Michael Gaydos
Lettered by Joshua Reed
It’s the wild end of this romantic yakuza epic from the creators of Jessica Jones! Tying up all the loose ends—for now—Pearl Tanaka confronts her past and her future. Will she choose the path of the artist or the killer? Which is her natural way?

“Pearl,” the return of Brian Michael Bendis and Michael Gaydos as creative partners bring this multimedia project to a close with issue #12. It is still hard to imagine this series ending in issue 6 as it was originally solicited, more so with this finale. Bendis and Gaydos stick the landing, “Pearl” and Pearl Tanaka have a completed an arc of self-discovery in the seedy world of San Francisco Yakuza and tattoos. The final chapter runs into a bit of turbulence due to its structure, but it lands the emotional-thematic beats that make this a satisfying conclusion for readers.

That turbulent pacing is born from two places. First there is Bendis non-linear writing style, which can be strikingly compressed for a writer so associated with decompression. The use of non-linear storytelling or even more linear approaches, but with smash cuts as scene transitions, emphasizes the importance of the present moment and denies readers a more omniscient perspective of narrative history. Pearl realizes something in this issue that I’m not entirely sure was foreshadowed or setup within the text for example (though I’ve yet to due an exhaustive deep dive.) Her realization within the structure of the book can come off as hand wavey, but it was also the kind of thing “Pearl” as a series was hardly interested in the first place. As with the sixth issue Bendis has structured a series that is more clever in retrospect as he an Gaydos reveal a key piece of history or tie everything together thematically. The final page tie-ups in this issue were emotionally satisfying, but it would be understandable if others were left wanting more.

“Pearl” jagged structure also leads to one of the highlights for the series and issue: Bendis’ writing of one to three page scenes. The first page is a oner, that sees Kimmy, Pearl’s forgotten best friend since the Japan issues, suddenly quitting work to get from Portland to SF. The page design is a standard six panels in a 3×2 grid, though Gaydos does some sneaky tricks with the background that gives it a livelier appearance as Kimmy and her incredulous boss discuss severance for three hours work. It’s just a solid scene that ends on a nice close up of Gary as Seth Rogen circa. 2015.

Or there is the next scenes, a three pager that picks up from the previous issues cliffhanger, FBI Special Agent Yukio Masako’s fortuitous confrontation with Pearl and the Endo Twins. In the DMT for this series I compared it with Guy Richie’s early gangster films, that continues as Bendis and Gaydos bounce these bumbling criminals and more competent individuals off one another to great effect. The use of photo reference by Gaydos has led to some of his facial expressions reading as a bit stiff and out of step with the scripting. There are a couple of such panels in this sequence. Just as there are several panels that absolutely land as Rick realizes how sweetly stupid he is.

And then the grenade gets tossed in along with a hail of bullets.

While that is a dramatic and shocking way to end a sequence, it’s part of the reason why the connective tissue between scenes feels week, either due to writing style or use of page budget. Due to the segmented structure, those sort of choppy or rough endings abound leaving the reader to intuit their long lasting effects.

The second sight of turbulence in “Pearl” #12 comes from the issues page budget of roughly 26 pages. As with the writing choices decisions made by Gaydos do support the main ideas in this issue, it is also a bit excessive. Of the 26 pages, 12 are used in double page spreads, just under half the issues overall page budget. If the spreads themselves weren’t this cool it would be much easier to knock the issue as Pearl makes a statement and realizes the spectacle of the moment. The big “Thoom” page of the shop being blown apart with Gaydos contrasting a blood red with the fiery orange inside the onomatopoeia and how the shop slowly disappears with each passing letter is beautiful. Pearl taking out the Nagasaki Nine as if she were in a John Woo movie is similarly spectacular. There is a feeling of swinging for the artistic fences in these pages, in a way other spreads or travel montages haven’t despite how straightforward these pages are comparatively. The art supports and articulates the statement Pearl is making, but there is a fleeting quality to them in how quick they are to read and understand. That brevity had me wondering what one less of those spreads and an extra two pages to smooth out transitions would’ve looked like.

At the center of this issue is a the surprising genre twist they manage to land, they turn the ending of The Godfather into a positive. That film was on some level the sublimation of the self for the family, “Pearl” reverses that as family reveals to our lead who she is and what she is capable of at the head of her clan. Emotionally it is the kind of twist that wouldn’t work if the structure of the book wasn’t supporting it. That twist cements Pearl’s self-knowledge and growth over these previous 11 issues and ends the series on a strong note.

“Pearl” marched to the beat of its own drum. That drum beat may not be as enjoyable to some, but there is a logic to the decisions the creative team make even if it isn’t the cleanest. With art by Michael Gaydos and this cast, it was something you don’t really see much of in western comics and I wouldn’t mind another round of it. In a letter to the readers Bendis hedges his bets on the future of the series. They have optioned the film rights so maybe her adventures continue on the screen. Or maybe after a breather Bendis and Gaydos want to jump right back in. The beauty of this sort of creator owned work is they have the space to make that determination.

Final Verdict: 7.5 – “Pearl” stays true to itself and comes to an overall satisfying conclusion.