Great for lovers of dark fantasy such as A Song of Ice and Fire or its television adaptation Game of Thrones, not to mention “The Walking Dead,” “Pestilence” brings the zombie apocalypse to the Middle Ages without skimping at all on any adult themes, making for an overall well made story that doesn’t feel forced to a rating by profanity, nudity, nor gore. Our spoiler-free review follows. 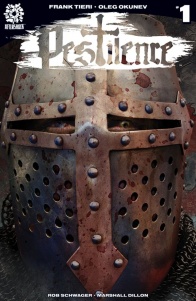 It’s the late 14th Century and a Great Pestilence –the “Black Death”–is sweeping across Europ, killing over 100 million people. BUT, what if history as we know it was a lie? What if, in reality, this was no straightforward plague, but the FIRST non-recorded Zombie Infestation of man? Ex-Crusader Roderick Helms and his fellow “black ops” agents of the Church, Fiat Lux, must seek out the cause of this undead outbreak and vanquish it before mankind ceases to exist!

Crusading ain’t what it used to be. In the debut issue of “Pestilence,” Frank Tieri systematically tears down the idea of a benevolent agent of the Catholic Church, instead paying attention to the obscene details of a conquering crusader’s fiefdom, in all of its vulgar “glory.” Former so-called heroes are murderers, rapists, and thieves, some even having taken to no longer wearing their armor, lest it get in the way of their own hedonism. And that’s before the arrival of the premise-making undead threat.

Tieri’s devotion to tearing down any romanticism about the era around the Crusades and the eras most known for “sword and sorcery” tales is extremely reminiscent of such works as George R.R. Martin’s aforementioned work, minus any apparent magic beyond the possibility of the Black Death itself. The so-called “knights” are nothing more than thugs with a badge and a sword. Even the best of them seen, our protagonist Roderick Helms, is still essentially a secret agent with his motley crew, the Fiat Lux, and has had more than his fair share of bloodshed in the name of his religion, from different nationalities and religions without regard for their gender nor age.

Far from make the story too dark to watch, the deconstruction of the genre actually makes the people of the Fiat Lux that much more interesting. They each have their personalities, both their virtues and their flaws. Each member seems to have his own way of handling a given situation. Furthermore, Helms does not seem to fully trust all of his own comrades.

If anything, the story elements involving the undead themselves are something of a reprieve. As fits with a story that does not seem to have much in the way of overt mystical elements, if any, a one that is in a time period approximately six hundred years before the appearance of the first hints of modern undead culture, the Fiat Lux don’t have any idea how to deal with the comic’s version of the Black Plague. Readers will likely be aware of the threat of bites, but the characters will not. They are learning the rules of the threat only now, unlike those of their work against certain of the living. It is a state that readers or viewers of The Walking Dead may be familiar with: the idea that the inherent dramatic irony of living in a world where zombie culture is common knowledge, but watching a group without any of that knowledge have to find out the tricks the hard way.

Be warned: if the story description didn’t clue someone in, this book is not for the faint of heart, nor the weak of stomach. Oleg Okunev’s artwork shows full bodies, severed body parts, and even occasional nudity to showcase different forms of torment, desensitize the reader to that kind of imagery. The nudity, which is primarily female, seems to be added in order to negate as much of the eroticism that may connect with showing sexual behavior as possible. Through this desensitization, Okunev is able to demonstrate the monstrosity of the living just as easily as that of the dead without too much of a danger of fetishizing the violence or other parts of the situation itself. Physical torture and other cruelties are shown without much held back. The no-holds-barred style of artwork showcases the down-and-dirty type of storytelling that goes alongside the liberal use of vulgar language, indicating that there isn’t much of a limit on where this series could go.

Some of Okunev’s scenes are extremely chaotic. For instance, at a dining hall, finding a way to distinguish between cloth, flesh, table, and foodstuffs may be difficult, befitting the party going on at the time. Rather than take away from the story, it helps with deeper immersion as the reader sinks more into the viewpoint of the Fiat Lux, who are outsiders of this affair, beginning in a relatively quiet, dark scene outside of the hall that is bereft of any people but themselves.

Where there is neither high levels of chaos nor visual obscenity, there is still grisly imagery. Okunev portrays scars such as those of Roderick Helms in detail, likely from battles past, indicating a lack of any one person’s invincibility in the face of even relatively mundane threats as attacks by the living. Even more thoroughly disgusting is the depiction of the undead. Okunev’s artistry showcases the disfigured, diseased, desiccated, and at times dismembered bodies of these zombies, even showing bones sticking through skin.

Together, the story and art of this issue showcase the fact of this series: ugly behavior is no less monstrous than the animalistic undead, and it can at times be hard to tell which are more monstrous: those who mindlessly consume the flesh of the living, or those who intentionally destroy entire cities for no reason other than that they can. This initial look into the dark depths of the world of “Pestilence” may leave you eager for more.

Final Verdict: 8.0 – Excellent introduction to a tale of medieval undead hunting that does well at introducing its principal characters.

“Pestilence” #1 will be available on May 3rd from AfterShock Comics