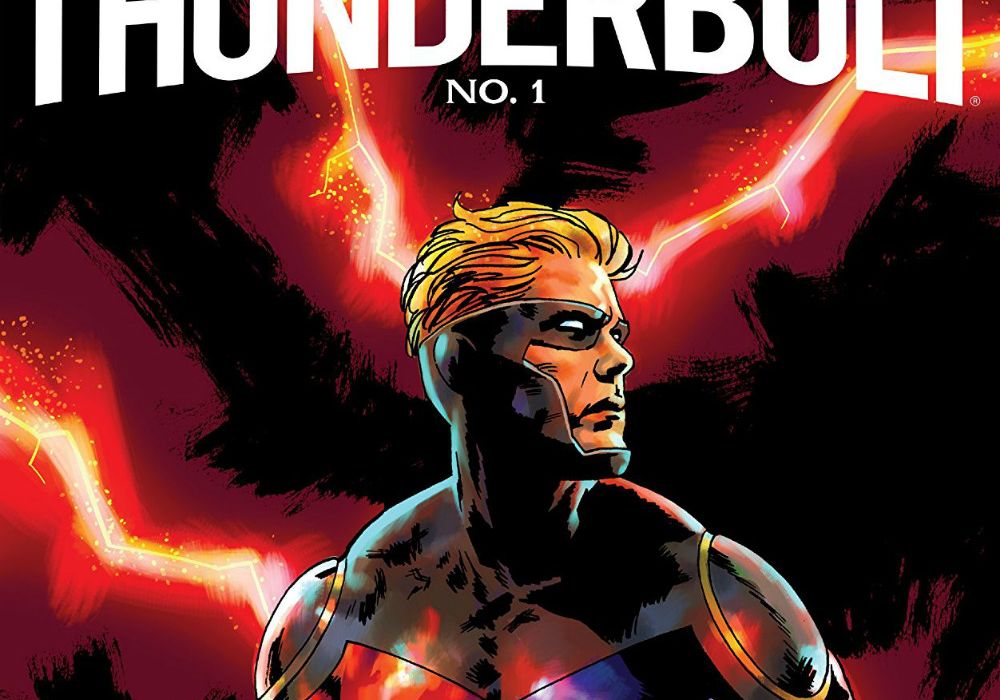 With “Peter Cannon: Thunderbolt” #1, Kieron Gillen has returned to superhero comics, with Caspar Wijngaard illustrating. This series is billed as a metatextual response to Peter Cannon, the character that was the inspiration for Ozymandias in “Watchmen.” Does the series follow through on that promise? Find out more in our review. Though, be careful, as there are some spoilers ahead. 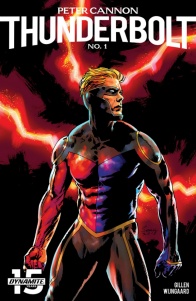 Written by Kieron Gillen
Illustrated by Caspar Wijngaard
Colored by Mary Safro
Lettered by Hassan Otsmane-Elhaou
His level of genius is matched only by his heroics, and in humanity’s darkest hour, he’s the hero they need the most—alas, poor humanity. Peter Cannon—the man known as Thunderbolt—is only too happy to leave civilization to face its end. Kieron Gillen (The Wicked + the Divine) teams up with powerhouse artist Caspar Wijngaard (Doctor Aphra) as he returns to the superhero genre with a dark, humorous and relentless love song to the genre. Well, “Love Song” in a Leonard Cohen Love Song kind of way. Peter Cannon, Thunderbolt: saving a world he hates.

“Watchmen” is, for my money, one of the best superhero comic books of all time. I know, what a wild and original opinion. But I do think it’s important to establish that I think “Watchmen” is one of the best structured and written superhero books of all time. With that out-of-the-way, I would also argue that almost every single project that has been billed as a spiritual successor, literal successor, prequel, reimagination, or adaption “Watchmen” can be graded on a scale of disappointment to complete, abject failure. Which brings us to “Peter Cannon: Thunderbolt” #1, a series I have mixed thoughts on, unable to figure out if it fits on that scale or really is something more.

Peter Cannon is the original inspiration for Ozymandias, the main antagonist of “Watchmen.” “Peter Cannon: Thunderbolt” #1 tackles the connection between these two characters directly. The issue opens with an alien invasion, destroying a city. Alien invasions are nothing new to comics, of course. But with the line being drawn so directly from “Watchmen” to this book, it’s clear that “Peter Cannon: Thunderbolt” #1 is supposed to be beginning with that series climax.

The issue opens with a number of full-page spreads, showing the death and destruction that is being rained down upon this city, before moving to a group of superheroes, all of them agents of different countries, asking for Peter Cannon’s help in stopping the invasion. This is where the issue takes its first interesting turn. Gillen has Peter Cannon give a speech laying out his view of superheroes, and what people with this great power should be working toward, and how they should be doing it. Cannon challenges the idea that superheroes should be working to save the world just because superheroes are supposed to do. But by the same token, Peter Cannon doesn’t put himself into the position that he should be the one in control. It is a tightrope that Gillen is having Cannon walk, between traditional superhero status quo, and the arguments of “Watchmen,” that if superheroes did exist, they would either be fascist, or enough of a narcissist that they should be in control of the world.

In most series billed as successors to “Watchmen,” they do not have a deeper point of view than the commentary they are making on that seminal story. They exist only in relation to “Watchmen,” and without that series, would be saying almost nothing at all. Unlike “Watchmen” itself, which on a craft level is a masterwork and on a story level was at the time revolutionary. “Peter Cannon: Thunderbolt” at least in this first issue, seems to have more on its mind than just the series it is calling back to, which in this case puts it ahead of the rest of its pack.

Keiron Gillen and Caspar Wijngaard are doing some really interesting work with the characters in this issue. While this series does have a direct connection to “Watchmen,” its characters are not simply pastiches of that story’s main cast. In fact, aside from Peter Cannon, there are no direct allusions “Watchmen” characters. Gillen and Wijngaard instead create a brand-new cast of characters that, instead of just referencing the cast of “Watchmen,” are a commentary on modern superheroes and politics in the same way that the original series was a commentary on its time.

Similarly, Wijngaard’s layouts in this issue have a connection to “Watchmen,” but never try to directly ape it. The layouts are based on the 9-panel grid, but not in the same way “Watchmen” was. These are not panels packed with detail. Instead, they are clean, easily comprehensible. And the grid is used to make small moments large. There are a number of times where, between panels, the only action that happens is Peter drinking a glass of orange juice. At the beginning of the issue, the grid almost feels like an afterthought, as the issue opens with five different splash pages. But when the 9-panel grids does kick in, it does so to great effect. The clarity of the moment to moment action, even in the small moments, makes “Peter Cannon: Thunderbolt” #1 feel unique.

There are some moments where the issue feels almost too clean. There is a lot of horror that is present in this issue. The issue opens with a close up on the face of a corpse. But the art doesn’t really sell the gruesome nature of this image. The lines too sharp and clean to really sell the darkness and horror. The colors, by Mary Safro, are also consistently bright and legible. It feels, at times, like the issue calls for a bit more grime. But “Peter Cannon: Thunderbolt” #1 moves in the opposite direction. However, the most I thought about this, the more it seemed that Gillen and Wijngaard don’t seem to be trying to chase the grimy reality of “Watchmen.” After this first issue, I’m not sure I know what they are trying to go after instead, but I’m definitely interested in finding out.

“Peter Cannon: Thunderbolt” exists in a metatextual middle ground. The series is not divorced from “Watchmen” entirely. But it seems like this team has more to say than just making readers recall that older story. There is a twist on the final pages that makes the connections between “Watchmen” and this series pretty explicit. But there is enough distance in the style and substance of this issue that it doesn’t seem like “Peter Cannon: Thunderbolt” will end up being just another failed successor. Instead, it feels like something new. Something different. And even more, a series with something to say. I’m excited to see where Gillen and Wijngaard take this series from here.

Final Verdict:: 8.5 – “Peter Cannon: Thunderbolt” is a successor to “Watchmen,” but at the same time, not afraid to take its own path.