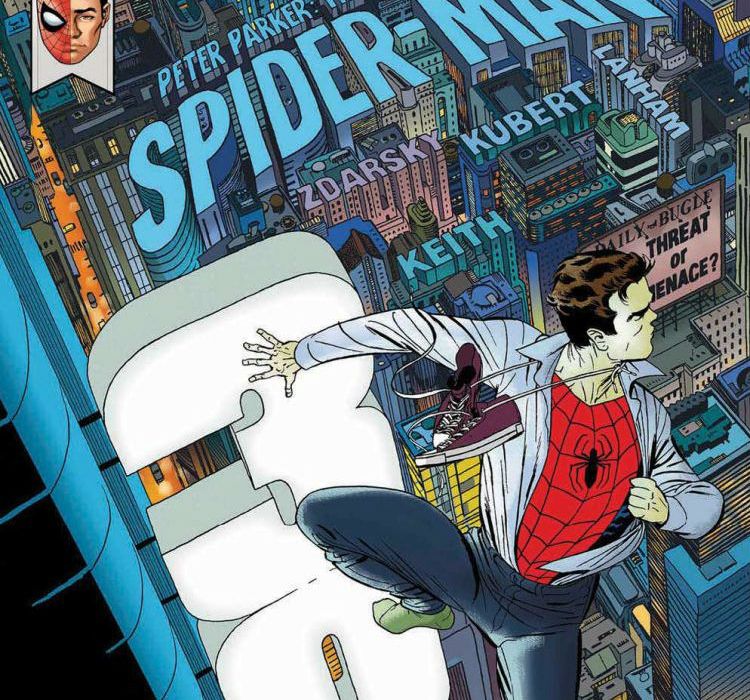 Clocking in at about 80 pages, “Peter Parker: The Spectacular Spider-Man” #300 is certainly the right size for an anniversary epic. And with it’s extra length main story, cover gallery and back up, it should have the content for it too. But can the issue’s team actually make it into a worthwhile story? The answer, and a decent number of spoilers follow. 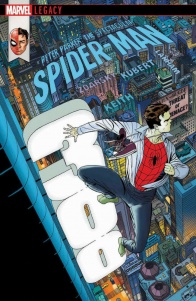 An oversized anniversary epic, told the only way your pre-eminent pals in the Spidey-Office know how — in the Mighty Marvel Manner! For weeks, the Tinkerer has been launching a campaign against his do-gooder brother, the Mason, and Spidey’s nearly met his maker more than once trying to stop their sibling rivalry! With a little help from a tech-heavy team of Marvel heroes, Spider-Man takes the fight directly to Tinkerer! But Tinkerer’s got tech of his own…and it’s out of this world!

For all the variant covers and extra pages, “Spectacular Spider-Man” #300 reads less like an important anniversary issue, and more like a slightly below average issue of the series with a bit of a longer page count. Chip Zdarsky has made this book into a decent counterpoint to Dan Slott’s “Amazing Spider-Man,” keeping the series pretty light and fun, and focusing far less on the continuity of the story around him. With this issue, though, that same lightness seems to work against what the story is going for.

For the first half of the issue, it seems like the story is building up to a fight between Spider-Man and The Tinkerer, who the series has worked hard at making seem like he might be an actual threat. But then the robot aliens show up, and the story completely shifts gears. It turns out that The Tinkerer is actually in contact with an alien race of artificial intelligences, that go from planet to planet destroying any living beings that keep other A.I. as slaves. His master plan was to create enough A.I. on Earth so that these aliens would come and destroy humanity. It’s here that the book tries to take a turn from light, fun Spider-Man story into a time travel, prevent the end of the world tale, and falls a bit on its face.

I should be clear, I have no problem with the idea of alien robots that go from planet to planet liberating other A.I. That kind of high concept science fiction is pretty much exactly my jam, and in most cases, it would draw me into a story rather than pull me out of it. But in this case, Zdarsky hasn’t earned that sort of world ending threat for this story. None of the lead up to this issue prepared for a story about an alien invasion, and the stakes were not nearly that high. Until now, this was a story about smaller character moments, the best issue just taking the time for a discussion between two characters. I’ve said that the lightness of this series was a good thing, and for most of the run it has been. But when a series with such low stakes takes such an apocalyptic left turn, it’s difficult to be invested in the story.

Adam Kubert and Juan Frigeri’s illustration’s work for the story. There is a good amount of momentum on every page, which is important for a character like Spider-Man. The layouts are not the most inventive, but they do a good job of drawing the reader’s eye across the page, making the action in the issue move quickly. The colors by Jason Keith are well done. Nothing out of the ordinary, but serviceable.

Over all, the art is well done, though it never quite conveys the sense of scale that this alien invasion needs. Like the script, the art is decent when it comes to the smaller scale that the issue starts out as. But as the issue moves into world ending alien invasion territory, aside from a two-page spread of the invading space ship, there’s nothing that conveys the sense of danger that should be present in the story.

Maybe the most disappointing part of this issue is that the back-up is so entertaining. Also written by Zdarsky, with art by Goran Parlov and colored by Giada Marchiso, it is a short story of Black Cat reminiscing about her life of getting chased by Spider-Man, before she was a huge crime boss. It’s a fun, funny little story, and much more entertaining that the majority of the issue that it is attached to. It’s an illustration of what Zdarsky can do when he is operating within his wheelhouse, and mostly just works to make the rest of the issue that much more disappointing.

It’s too bad that it looks like this book is moving away from what made it worthwhile in the first place, as a kind of side Spider-Man story that kept things smaller scale a fun. It looks like going forward, the story will be involving a time travel plot, which will hopefully bring the saving of the world down to a scale that works a bit better for the creative team. But this issue, with it’s lack of stakes and scale, is a hard to recommend, unless you’re already committed to the story.

Final Verdict: 5.5 – “Peter Parker: The Spectacular Spider-Man” #300 is a disappointing anniversary issue, missing a lot of what has made the book work in this run.