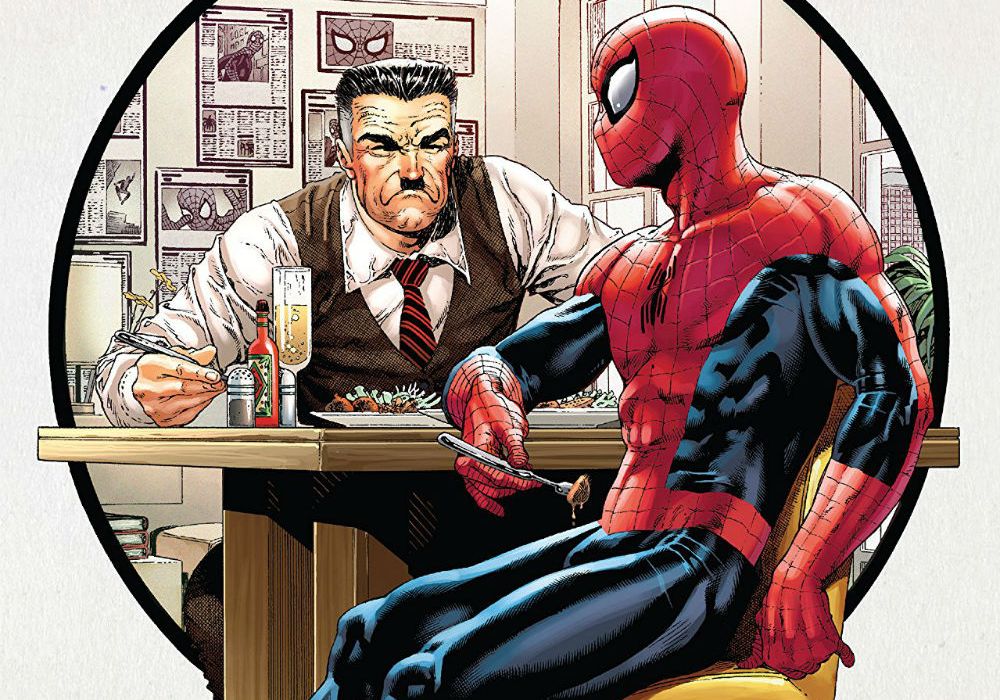 You’re a menace, Spiderman! And I’ll prove it if my name isn’t J. Jonah Jameson! Now sit down and enjoy your lasagna, it’s fresh out of the oven and seasoned with spoilers. 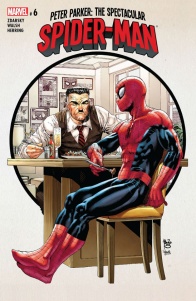 J. Jonah Jameson’s got the scoop of the century — a once-in-a-lifetime interview with the menace of Manhattan…SPIDER-MAN!
PETER PARKER: THE SPECTACULAR SPIDER-MAN, MY DINNER WITH JAMESON is one tale you won’t want to miss!

It’s been a while since I’ve read a spider-book in the main 616-cannon. Last time I did was for the ‘Spider-Verse’ crossover and I only read that because Morlun was back. JMS’s Spiderman run was the very first comic book I ever read and I always get a little happy when part of his run is used as it has become retroactively somewhat null and void (looking at your ‘One More Day’). I say all this for two reasons: one, because I know next to nothing that Dan Slott has done over the last decade with Peter and his cast (save for that Doc Ock body switch thing) and two, because I think it’s important to know where a reviewer is coming from when they look at something as long running and varied as a Spiderman story.

Let me get to the reason I say this, I’m not sure if I’m sold on the way Zdarsky characterizes Spiderman in either this issue or the series as a whole (but mostly this issue). He hasn’t been the teenage goofball in a long time, true, he’s been running an international company but I don’t get why he’s acting so immature with J. Jonah Jameson. His temper is short, his demeanor is confrontational and constantly insults Jameson. Maybe there was some extra bad beef between the two of them in Slott’s run or Mark Waid’s mini-series “Family Business” but as it stands, instead of trying to work with Jameson, he’s actively antagonizing him. It feels very un-Spiderman.

Then again, he does have reasons to be incredulous, ones Zdarsky weaves into the issue so that even if you are a new Spiderman fan, you can understand the why behind his anger, even if I feel the ways he express it feel off. But enough character analysis, what about the actual issue? How is it?

To start, it’s made me wonder why Walsh isn’t the main series artist. Andy Kubert is great but there is something about the way Walsh lays out a page that just feels so much more intimate and works better with Zdarsky’s brand of comedy. We open the issue on a 9 panel grid of Jameson preparing the dinner table for his interview with Spiderman. None of the panels show faces, instead being shots of hands or bodies or the backs of heads, giving it an more impersonal yet intimate feel. We are right there in the room with these two, seeing what they’re seeing, doing what they’re doing. We can feel the heat of the oven and taste the lasagna.

It makes it so when he pulls back the camera on the next page, the half-page panel has the weight of that set up behind it and feels important, instead of just another large-ish panel. That’s the strength of this issue, the closeness of it. We never stray too far from the characters, most of the shots sticking to close-up or mid-rage and because of this, the emotional moments hit home.

Although, seeing Peter’s face make me rethink my earlier statement. I think Walsh, which very adept in paneling and capturing emotion, tends to make faces too simplistic at a distance. It works with Jameson but Parker, after his unmasking splash-page, looks off, his features too small compared to the rest of his face. He shines in the quiet moments but in the larger gestures, it falters.

On another note, there is something to be said for the nine-panel grid. I know it’s something talked about a lot and I am certainly not as well-versed in its history and uses but the modern comic age has seen a tendency to walk away from it, to stick to a wide-screen format or to play with paneling. I’m not saying this is a bad thing – this comic uses a wide variety of panels to great effect – but it does mean that artists have to come up with other ways to decompress and slow down scenes. There are some series that do this great and some where three issues could have easily been condensed into one had they used a more economical paneling layout.

This is an issue where I feel like I got my money’s worth. It wasn’t very action oriented, even though it had moments of it, and it didn’t move the plot along all that much, but it deepened our understanding of Jameson and Peter and makes them reflections of each other. I think that’s why Zdarsky set Peter up in the way I described earlier, in order for him to realizes his own folly in assuming that Jameson was merely a crackpot with a meaningless vendetta against Spiderman instead of the broken, lonely man that he is.

We aren’t meant to agree with Jameson but we can now understand his motivations more and because Zdarsky uses comedy in much the same way he says Peter does – to put people at ease and to distract from the scary and the sad – we can get a lot of emotion here while also keeping it funny. It is not a light comedy, which is what Spiderman is usually associated with.

The final thing I want to say is going back to Walsh’s paneling. I wanted to highlight two sets of panels in particular. The first is early on in the dinner, when Spiderman tells Jameson the real reason he is a superhero, that he does it to save people. We have an imposing looking Spiderman that breaks across two panels, overlooking a shadowed Spiderman, who is hanging his head in shame. That’s followed by a close up shot of Jameson, his featured shadowed as well so we can’t see what he’s thinking, and we can see a photo of him and his wife in the background.

Then it cuts to, what I presume is a panel from “The Clone Conspiracy” (again, haven’t read it), of a hand cupping a crying woman’s face. I missed the connection at first but these are the kinds of details that, when re-reading the issue for these reviews, only serves to strengthen them.

The second set of panels is near the end of the issue. It’s a nine-panel grid tightly focused on Jameson and Spiderman as Jameson breaks down, having vocalized all that he has lost. Spiderman tries to comfort him but is rebuffed and then, in a three-panel shot, he removes his mask, revealing his identity. I highlight this because the center panel is borderless, centering a fully broken Jameson and a Spiderman who is now fully comprehending his own behavior as well as that of his rival. It is the snapshot with which the whole page revolves around and gives us that impression of the emptiness they both are feeling.

Next month, the return to Legacy numbering and I know that I for one am excited hear more from our webcrawler. Hopefully it doesn’t end up like ‘The Trial of Peter Parker.’ *Shudders*

Final Verdict: 7.9 – A very strong, emotionally heavy issue of this comedy series, if not a little out of character for Peter. Plus, it all took place over dinner, which is something I never thought I’d see.