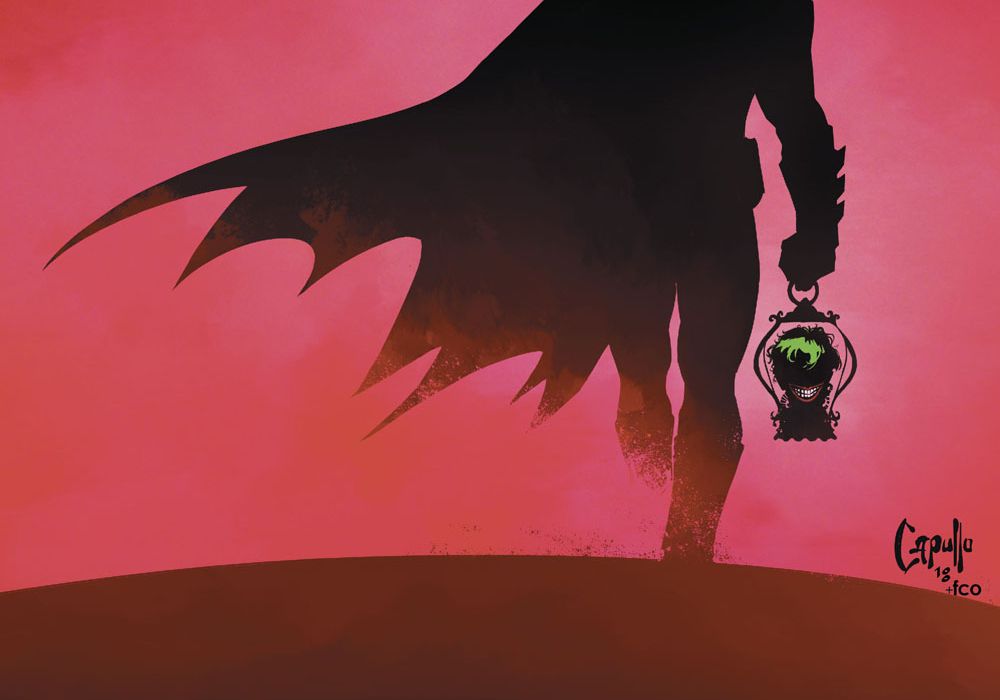 “Batman: Last Knight on Earth” is the nadir of the recent trend of psychological deconstruction of the dark knight, making the character’s damaged persona not only the seed of this prestige-format mini-series from the creative team that ushered in the Batman of DC’s New 52 era but also the driving force behind its apocalyptic narrative. 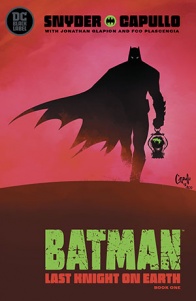 Bruce Wayne wakes up in Arkham Asylum. Young. Sane.
And…he was never Batman.
So begins this sprawling tale of the Dark Knight as he embarks on a quest through a devastated DC landscape featuring a massive cast of familiar faces from the DC Universe. As he tries to piece together the mystery of his past, he must unravel the cause of this terrible future and track down the unspeakable force that destroyed the world as he knew it…
From the powerhouse creative team of writer Scott Snyder and artist Greg Capullo, the team that reinvented Batman from the emotional depths of “Court of Owls” to the bombastic power of “Dark Nights: Metal,” DC Black Label is proud to present the bimonthly, three-issue miniseries “Batman: Last Knight on Earth,” published at DC’s standard comic trim size.

After turning the final page of this all-star cast production, readers may feel just as lost as Bruce Wayne does. There’s a dizzying number of narrative threads at work in this extra-sized premier issue and a tremendous amount of ground to cover after this herculean exercise in exposition. Seemingly, the world has come to an end, and Bruce Wayne has had some part to play in its demise. But let’s come back to that, shall we? The thing that will immediately capture readers is seeing Capullo and company back at the artistic reins of Batman. Capullo’s work on “Batman” made the 2011 reboot of the character an instant classic, bringing a muscular elegance to the title, a propulsive street-level bombastic ballet. Capullo’s virtuosity is undeniable here too, and the inks by Jonathan Glapion only enhance the aesthetic. More studious eyes may differ, but the world that Capullo and his finishers create looks like a cross between Frazetta and the masters of Manga. Only Bruce’s Marine-like high fade seems a bit out of place, but it’s still a distant second to Diana Prince’s daring coif. Each page is a sumptuous feast for the eyes, offering casual out-of-left-field spins on DC staples. The efficiency with which the creative team creates a world that’s both alien and familiar is exemplary. It’s a master class in tone setting, but there’s something that feels a bit too familiar in recent Batman lore in the face of all this Elseworlds-fueled imaginativeness.

While many of the best Batman stories set him as a loner against insurmountable odds, this one feels a bit like a bridge too far in the early going. By design, Batman sets himself apart, and why not? He’s often the smartest guy in the room, but just as Tom King’s run on the flagship title has taken great pains to try to crumble Batman’s mighty mind, Snyder cranks the dial to 11 here by handicapping our hero even more and to the point that readers question the reality of the narrative so completely that the consequences are almost blunted. It’s as if Snyder is daring us to take this seriously by putting the Joker’s head in a lantern and having it provide comic relief, like King Lear‘s fool, and in another act of brazen gusto, narration. As the issue progresses, it’s difficult not to pine for a take on the character where Batman’s warped psychosis was a given, allowing the story to take more conventional twists and turns that didn’t depend on our questioning of what’s real and what’s not. If this first issue didn’t follow so hard on the heels of King’s ‘Knightmares’ arc, the cumulative effect might be different, but alas, these stories aren’t told in a vacuum.

Bang for the buck, there’s a massive amount of narrative detail in this first issue that welcomes close and rewarding scrutiny. The colors by Plascencia pop, and Napolitano’s expert lettering makes the narrative easy to follow even as we scratch our heads at how the world has come to this. This reviewer freely admits to feeling a bit bewildered by Wonder Woman’s explanation for the current state of affairs. By the time Batman sets out on his quasi-solitary quest at the end of the issue, there’s a feeling of comfort in its inevitability. The Dark Knight is not a joiner, and his recent history has been hallmarked by the predictability of its unpredictability. One thing you can bank on is that he never accepts defeat. Snyder nails that aspect of Bruce’s character even if this Bruce is not the one we’ve known. Even if it means turning his back temporarily on his closest colleagues (another similarity to King’s run), he’s going to see this through and get some answers, and answers is what this story is going to need with a quickness. Apart from the creative team’s pedigree with the character, the mysterious setup of the series is its biggest narrative draw as well as its biggest obstacle.

Agatha’s Christie’s Murder on the Orient Express is famous for many reasons, but as a fan of the author it always felt a bit anticlimactic. Without giving too much away, Christie’s Belgian sleuth Hercule Poirot presents two solutions to the book’s murder, one that is intricately complicated and one that is almost comically straightforward. The former is dramatically superior, satisfying on the multiple levels that great mysteries are. The latter is a thematic and karmic necessity given the circumstances surrounding the killing. In “Batman: The Last Knight on Earth,” it feels like Snyder is heading down a similar storytelling path. There’s so much going on in this issue that he’s raising the stakes for its resolution. A thematic conclusion that does not tie up the threads presented here will likely leave readers wanting. It’s difficult not to have high hopes for the remaining two issues however. Snyder has proven himself worthy of the task more often than not, and you have to admire his daring narrative choices.

“Batman: Last Knight on Earth” looks and feels like an important entry in the Batman mythos even if it rests outside of big C continuity. It’s a book that clearly has something to say about what makes Batman unique, setting a crisis of character against a backdrop of worldwide cataclysm. Amidst all the sturm and drang, the quiet scenes with Batman’s oldest confidante play out the best. Bruce and Alfred’s relationship has always been at the bedrock of the Batman’s grounded nature, the thing that keeps him between the lines when darkness threatened to overtake him. The lengths Alfred goes to here to preserve Bruce’s safety and sanity are the stuff of great tragedy, brimming with foolhardy hope that his charge will, for once, resign himself to defeat and not throw himself in harm’s way, but as in all great legends, every knight must have one last crusade.

Final Verdict: 8.0 – Snyder, Capullo, and company have built an elaborate series opener that’s promising and preposterous on many levels, but as the surreal narrative of “Last Knight on Earth” unspools, it’s almost impossible not to trust their instincts with the character.