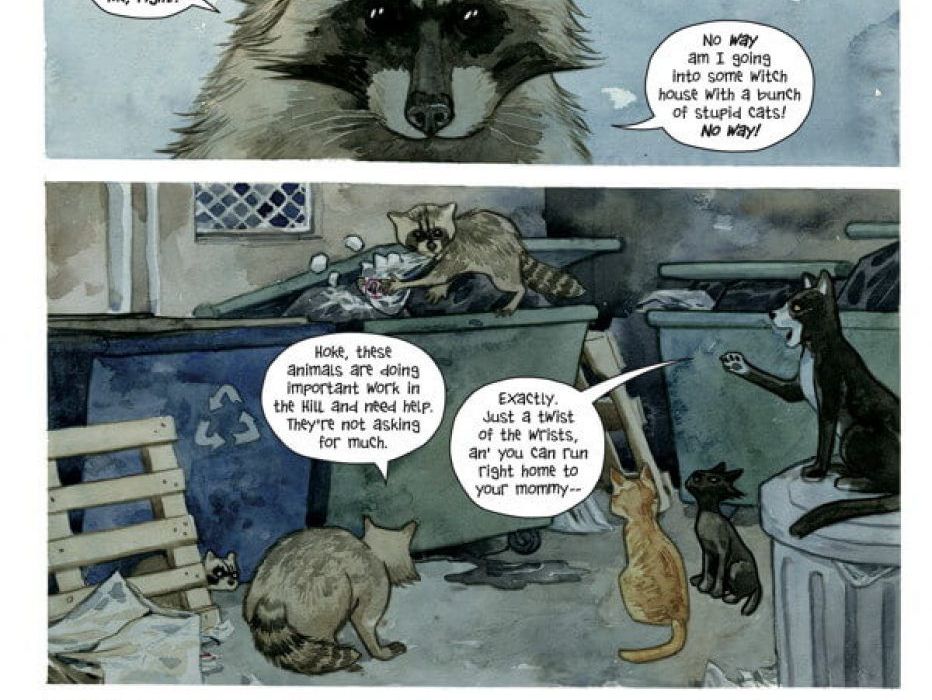 All readers have certain blind spots – creators, titles, genres that, for whatever reason, just sort of slipped through their fandom. Many times, you’re not even aware of them until someone lambastes you for not reading book X or knowing creator Y. This happened to me a few years ago, when a friend was gobsmacked by the idea that I had never read “Beasts of Burden.” It is all there for why I would enjoy it: I’m an animal lover, I really enjoy fantastical comic stories, and Jill Thompson’s artwork is incredible. So, when Dark Horse announced this one-shot, and specifically said it was a good jumping on point for new readers, I decided to give it a shot.

Keep reading for our spoiler free review of the book. 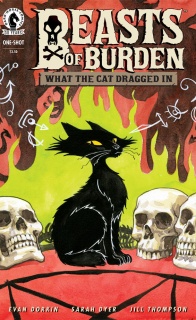 This standalone adventure is a perfect entry point for readers new to the award-winning series. When curiosity gets the best of Burden Hill’s cats (and one reluctant raccoon), sleeping demons are awakened and black magic is unleashed on the town of Burden Hill.

Part of why I am a comics fan is because comics can allow you to do anything and go anywhere – there is literally nothing that can’t be done in a comic. In so many ways, this is something that I really miss from my childhood of playing with friends, imagining we were astronauts; or that our dogs were delivering us secret messages; or that we were spies, collecting important information on our parents to use against them one day. I see this in my four year old daughter, who creates sometimes incredibly intricate – and sometimes incredibly mundane – worlds to play in, where anything goes.

This is something that a lot of comics have seemed to get away from; now, we get ‘realistic’ stories about men who dress as bats or who were bitten by a radioactive spider, instead of using the medium to its full possibilities. “Beasts of Burden” has no such problem – this is a straight up talking animals/withcraft book. Think of it like Toy Story, where the animals, instead of toys, have thoughts and relationships that the humans don’t see. Except here, there is far more evil afoot.

This story, I am presuming, plays a lot off of the events of the prior “Beasts of Burden” stories, but never do you really feel lost. Part of that is due to the masterful visual storytelling of Thompson, who manages to give cats their own distinctive features and personalities. Thompson’s artwork is somehow both incredibly detailed and true to actual housecats, but also manages to elevate them to something that feels dream-like and mystical, but never pulls you out of the ‘real’ world that the story inhibits.

Thompson’s raccoon, perhaps my favorite character in the issue, is really something, visually, to behold. While all the animals look beautifully rendered, the raccoon stands out even more so. The deep, dark eyes, which in person can appear a little disconcerting, here look full of curiosity, frustration, and life. These animals don’t look like they’re not going to pop up in your yard, but they also don’t look normal. They’re just ever so slightly elevated from your garden variety, and that little touch, especially on our ring-tailed friend, really works wonders.

The story, by Dorkin and Dyer, is crafted in a way that makes the supernatural stuff both feel right at home, and also dangerous. I like a story where the stakes feel real and earned, and somehow cats playing with curses and demons totally works, and feels like it has actual consequences. I love how Burden Hill feels like every suburban town in America, but also doesn’t feel out of place having a sealed up haunted house in it. Dorkin and Dyer do their best to make the mystical mumbo jumbo as accessible as possible, without spelling everything out for the reader. A few times throughout the issue, the mysticism gets really amped up, and it is only then that you realize “Oh, I’m reading about a cat making a blood oath with a demon – cool.” The fact that it can so seamlessly vacillate between being a gorgeously drawn book about cats to a cabal of Satan worshipers is a real testament to the creative team.

Dark Horse, more than any other publisher, uses one-shots and specials to bring new readers in, and it does so to great use. The reason I was able to jump into Hellboy was because of the various one shots and minis that were specifically labeled as ‘good jumping on points.’ And unlike the big 2, those words are actually true here. I was never lost while reading the book, but it did pique my interest to go back and see more from these characters. More publishers would be wise to do something like this now and then, for reasons both practical – new readers! – and philosophical – new readers!

Final Verdict: 8.0 – A solid introduction to the magical world that Dorkin, Dyer, and Thompson create.