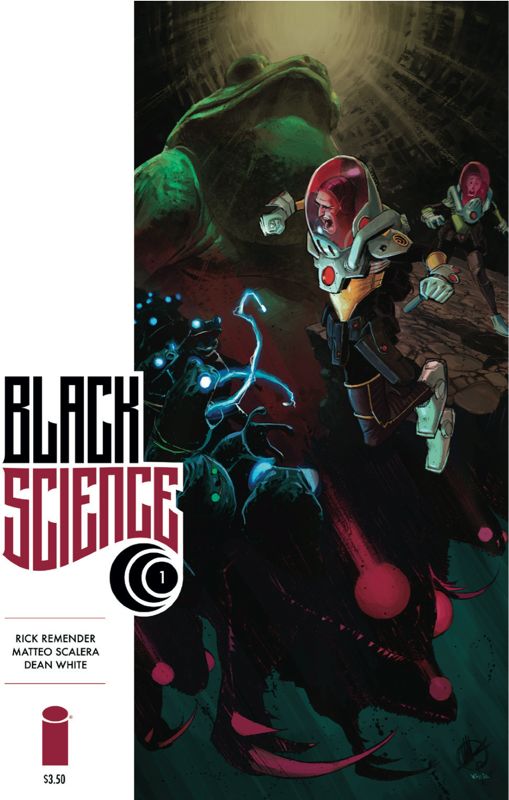 Rick Remender and Matteo Scalera must know a little something about black magic themselves. Their unbreakable spell is cast through a mix of unabashed love for multicolored 60’s sci-fi grooviness, carefully tapped political exploration, hard-boiled narration, and protagonists with a penchant for living dangerously when it comes to the dark side of science. 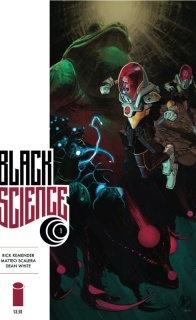 Grant McKay, former member of The Anarchistic Order of Scientists, has finally done the impossible: He has deciphered Black Science and punched through the barriers of reality. But what lies beyond the veil is not epiphany, but chaos. Now Grant and his team are lost, living ghosts shipwrecked on an infinite ocean of alien worlds, barreling through the long-forgotten, ancient, and unimaginable dark realms. The only way is forward. The only question is how far are they willing to go, and how much can they endure, to get home again?
Join writer RICK REMENDER and the superstar art team of MATTEO SCALERA & DEAN WHITE for this face-melting science fiction epic spanning the lifetimes of a cast of dimensional castaways lead by the man who caused it all.

Grant McKay is a visionary, no doubt about it. He’s also obsessed. He’s obsessed with his ideals. He loses sight of what’s really important. Or maybe he just has a different ranking system for what actually is important. To him, the number one priority is being one’s own boss. To him, it’s the only way that unlocking the true potential of scientific discovery can be made possible. McKay is a very flawed protagonist – so much so that everyone in his life is subject to serious risks. On the surface, this looks like Reed Richards and his family bounding away to some other wacky dimension in the Fantasti-car, but that couldn’t be further from the tone that’s being set here. Ultimately, that is what is going to set “Black Science” apart from every other riff on pulp sci-fi in fiction today.

“Black Science” #1 uses a hefty narration from McKay, a man clearly fraught with regret over what his obsession has done to the people around him. It’s a classic introspective self-examination, which works quite well in indicating just how far over his head McKay has gotten himself. Unlike, again, something like the “Fantastic Four” – we can’t be sure if our heroes can come up with an impossible retcon to set everything right again and bring Johnny Storm back from the dead. If the solemn, grave mood of the first issue is any indication, everything isn’t going to come out smelling like space-roses.

There is fun to be had though, around the periphery, which is probably the right way to approach a story that examines the real emotions and consequences of scientific experimentation and space-time dimensional faring. McKay ends up encountering a race of frog-people that somehow delight in their quaintness and shock with what can ultimately be characterized as frog-ruthlessness. These moments, away from the introspection, give McKay a chance to be swashbuckling and impulsive. These moments serve to show McKay as a multi-layered man of action. He may spend much of the issue contemplating regret for his actions and explaining to you his principles with are mostly built on chaotic neutral tendencies, but ultimately he proves to also possess nobility.

Matteo Scalera and Dean White take full advantage of the vast palette of notes that Remender wants to play with this new world. White appears to take more of the art duties than typically noticeable when he’s done recent collaborative work at Marvel. Both of these creators are tremendous talents, but it was definitely a pleasant surprise at just how well their works melded into one another. Scalera and White are on the same wavelength here. White supplies loose, painted plays on “Kirby-dots” to pepper the background, recalling the space-adventure comics of Marvel and DC Comics’ past. His landscape work is impressive in its variety and its ability to call attention to itself only as much as is necessary. Truth be told, much of the charm emitted by “Black Science” comes from the way that the overall visual design qualities recall 60’s pulp sci-fi design work. This is the stuff of dime-a-dozen sci-fi novels, whose covers tended to be far more interesting than the prose within. Imagine a whole comic book full of this stuff.

Scalera uses a looser style than we just saw on his most recent work “Dead Body Road” to great effect. The otherworldly “Lost in Space” mysteries of “Black Science” comes through in spades, with plenty of detail. Where modern sci-fi tries to slim down and modernize the future with simple color schemes and sleek, minimalist designs, “Black Science” embraces a throwback imagination toward what far-flung future technology could look like. Helmets are a gaudy pink color. The space suits are chunky in design, filled with pouches and tubing. It’s aesthetically unpleasing to wear, I’m sure, but it’s fun to see in the pages of a modern comic. The design sensibility is very specific and it nails the “era” that it’s aiming for.

“Black Science” should surprise and delight all but only the most stickiest of sticklers who don’t care to revisit pulp science fiction in any sort of throwback way. Scalera and White combine to create a tone-perfect pulp sensibility and Remender is firing on all cylinders in giving us another wholly-formed character to take us through all those gorgeous landscapes. As a collaborative effort, “Black Science” immediately impresses with its relentless sense of wonder mixed with grounded, complex characterization.