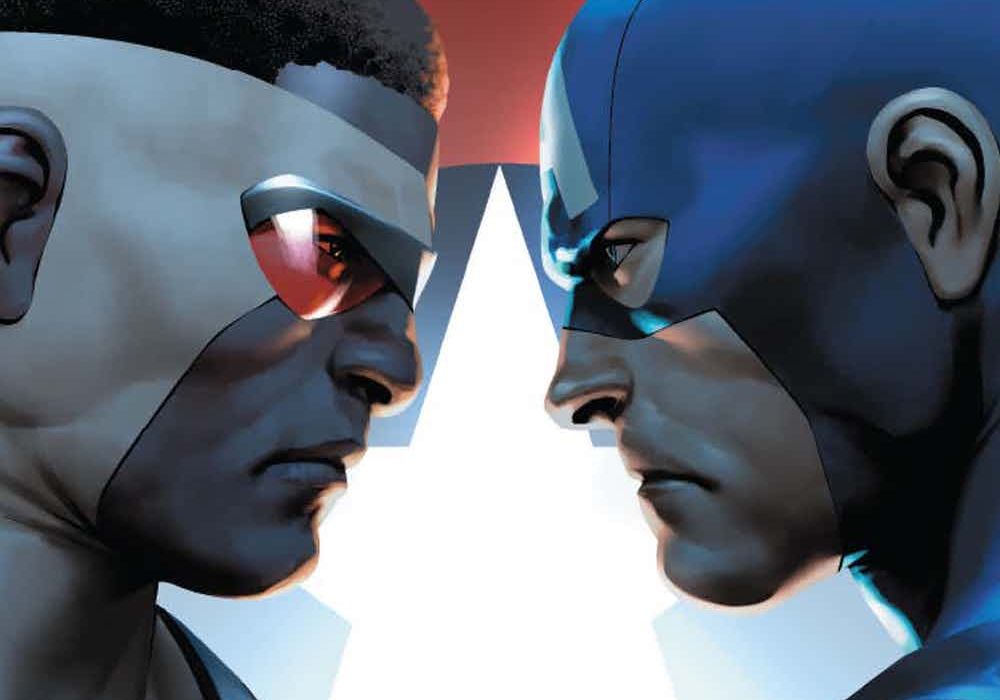 Nick Spencer crafts a story of two completely opposite Captains America that feels less like a tie-in, and more like an essential part of the “Secret Empire” event in “Captain America” #25. 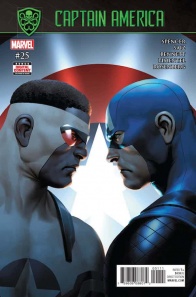 Spencer writes this issue in a way that provides triumph for both the villains and the heroes. The first half, about Steve Rogers’s two separate victories, is written in a rather odd way. These victories are written into the narration as if Rogers somehow did not fully win because what he truly wanted was willingly given over, despite the fact that it means things are actually easier for him. What is said to be a refusal to bow down and accept fascist rule comes across as . . . bowing down to appease a dictator. While perhaps the decision not to fight is part of the message, it seems rather disturbingly in favor of appeasement as a valid response to a dictator who wants total control.

On the other side, we have Sam Wilson. His speech is very well done, tapping into the core of this event. It brings up how badly the heroes of the Marvel Universe have been messing things up for at least a decade in real time. There are humorous points, such as antics with a cake and a discussion of the embarrassing powers and nickname of an innocuously important Inhuman, with a culmination in an upturn of fortunes for once in this storyline, especially once Namor gives his own, anti-appeasement monologue in contrast to the early events of the issue.

The main issue with this writing is not that it is just poorly done; in fact, the heroes’ side actually has pretty good work. The problem lies instead with the fact that the plot elements expanded upon here are essential to the main event series. From a Chekhov’s gun brought up early in the event being paid off in full here, to the rousing speech hinted at in the main series being said on these pages, to the revelation of the identity of a secret advisor here who has an important role, this issue feels less like “Captain America” #25 than it does like “Secret Empire” #7.5.

The differences of perspective play off very well in the pencils of Joe Bennett and Jesus Saiz. In Steve Rogers’ sole direct appearance, he is drawn from oppressive angles, from directly up in his face to filmed from a low perspective, akin to certain real-life dictators. This perspective allows a kind of menace that shows how far he has fallen as the brainwashed Supreme Leader.

Bennett and Saiz draw the attack on New Tian from a vast multitude of off-center angles, rarely ever showing the ground directly at the bottom of a page or even directly at the top. This perspective causes readers to be disoriented by the chaos of the fighting. Only when the action stops does the “camera” seem to right itself, and stay relatively righted until after the assault on Wakanda.

On the other hand, Bennett and Saiz draw Sam Wilson and his friends from an angle of triumph, the light shining down on Wilson himself. Their facial expressions are given a lot more weight, showing their humanity while HYDRA is kept relatively inhuman.

Rachelle Rosenberg’s colors also add a sizable amount to the plotting. Whereas the color schemes of Rogers’ side are dark and dour, those on the side of Wilson are given a brighter color. Wilson himself is given an almost saintly glow about his person during his triumphant speech, and the artificial intelligence Tony Stark has an almost ethereal glow to the holographic “head” on his armor’s shoulders, akin to a divine protector. The heroes attacking villains also show a distinct difference in the color schemes. In particular, a splash panel of the Underground attacking the HYDRA infiltrators shows the darker colors and heavier shadows of the latter juxtaposed against the brighter, more sunlit heroes.

As a tie-in, “Captain America” #25 is essential reading to the “Secret Empire” plot. There isn’t much in the way of actual Captain versus Captain conflict, unlike the cover implies, but it remains a good, well-illustrated and colored read. Unfortunately, this status as a tie-in makes it not fit particularly well as its own story, instead acting as a stepping stone between issues of “Secret Empire.” While this issue was seemingly meant to be the culmination of both stories, from the perspectives of Steve Rogers and Sam Wilson, it seems more like a lead in toward that story to come later.

Final Verdict: 7.0 – While a very good issue with well done artwork, “Captain America” #25 is held back by the fact that it is in fact a part of the Secret Empire event in all but name, and essential to its development.