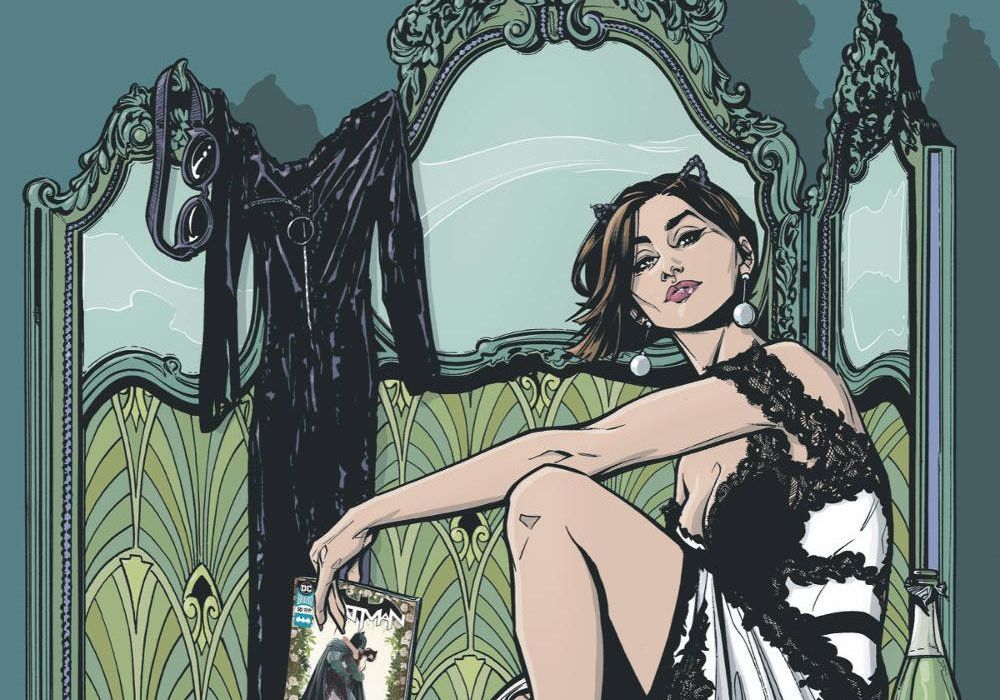 Catwoman is an old lady. Not the character in the comic, I mean in real life. Selina Kyle first appeared in the first issue of “Batman” in 1940. She’s endured for decades, in multiple series across media. That’s because there’s an ineffable quality, a versatility, that allows her to exist in trippy fantasy and grounded capers, on the right side of the law and the wrong. Joëlle Jones understands this, and even though her first issue of “Catwoman” is a conventional story, it is executed by a master of the comic craft. Fair warning, not only will I be discussing spoilers in “Catwoman” #1, but I will also be spoiling the twist ending of “Batman” #50. If you would like to remain unspoiled skip to the last paragraph and come back when you’re all caught up! 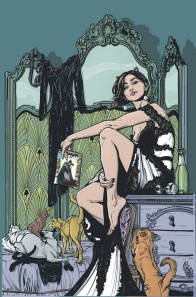 The wedding night’s barely over, but Catwoman’s back on the streets, this time to expose a copycat who’s pulling heists around Gotham City. As Selina cracks the whip on her former criminal cohorts, she’s attracting unwanted attention from one of Gotham’s most dangerous groups. The mob? Nope. Try the GCPD. And as if the Bat-Bride didn’t have enough problems, don’t miss the debut of an all-new villain determined to make trouble for all nine of Selina’s lives. Don’t miss the start of an all-new monthly series written and illustrated by Eisner Award-nominee Joëlle Jones!

Selina Kyle is on her own again, which is great for readers but a bummer for her. Catwoman has some of her coolest adventures when she’s operating as a solo thief, but the circumstances that led her hear are unfortunate. Her wedding to Bruce Wayne has been teased for months, but in a turn that shocked readers and the Batman alike (but not readers of the New York Times), Catwoman left Batman at the altar.

Where does a thief flee when she’s pissed off supervillains, and most of the Justice League? Mexico it would seem. Catwoman is now living as a crazy cat lady in Villa Hermosa, a fairly large city in the southern half of the country. When I say crazy cat lady, I ain’t joking. She’s living alone in a loft that contains at least eleven cats, and she’s making a living as a professional Mahjong gambler. First of all, that’s amazing. Second of all, that’s the classiest way to hit rock bottom I’ve ever seen.

Jones handles both the writing and the art, with expert color work from the great Laura Allred, making this issue as tight as you’re likely to find a comic. It opens with a shocking image- Catwoman firing a 9mm point blank into some cops- and never lets up. The issue in constantly disarming, never letting the reader get comfortable. Early images don’t make sense, and then when they are explained they transform from nonsense into mysteries. That’s confident writing. A lesser story would leave the reader holding the mystery box. This issue deftly explains the weirdness, leaving us with a much more intriguing mystery.

Why is Catwoman shooting cops? Has she really fallen so far that she’s become a casual murderer? We learn halfway through the issue that no, this is not the case, these crimes are the result of a… copycat.

Jones gets a million dad joke points for the great pun, but an evil doppelganger giving the hero a bad name is superhero comics 101. Spider-Man deals with it every few years. It’s a staple of “Green Arrow” comics. Captain America still can’t shake off the months he (or a clone or something? “Secret Empire” was confusing) spent as the leader of Hydra. Having to clear your name is about as basic as a solo series gets.

That’s what makes this debut so impressive. Jones doesn’t completely subvert the formula; she creates a damn good comic book. A large part of this is the art. There are two things you need to absolutely nail when you are drawing a “Catwoman” comic: slinky acrobatics, and actual felines. This issue gives us both, and they are a masterclass in comic craft. Selina’s escape from the cops onto a train is thrilling thanks to the art. There’s one panel of her doing a cartwheel through the closing doors, and it’s the perfect balance of momentum and space. I’ve gotten caught in a subway door, it’s a bit embarrassing but not dangerous. Here it looks like Selina’s leg is about to be chopped off.

And the cats! They are perfect (purrfect? Sorry/not sorry). Not only are there nearly a dozen of them, all with their own personalities they are highly emotive and interact with Selina in an incredible way. One panel of a concerned kitty will cause every cat owner in the world to nod knowingly. Another has the cats interacting with Catwoman’s silhouette in a getting dressed sequence that can only be described as cinematic.

Jones also is in total control of her tone, something that challenges a lot of superhero writers. How many comics can show Black Widow or Nightwing kicking a bunch of generic thugs in suits? You don’t want your street-level hero to necessarily battle Sinestro or Amazo in the first issue, but you don’t want your villain to be a disposable businessman either. That’s why the reveal of the Governor’s wife is such a great moment. She’s a terrifying modern twist on a villain out of “Dick Tracy” or “The Spirit,” and I can’t wait to find out how she’s connected to the whole evil scheme.

Last paragraph time. No more spoilers! Fans of the character should read “Catwoman” #1! It’s beautiful to look at, and Selina is the vulnerable badass we all know she is. The cats are on point, and the action is masterful. If anything holds the issue back, it’s how familiar this story feels. But you know what? I’ll take a well-trod plot with brilliant execution over a poorly realized unique idea any day. Joëlle Jones is the real deal and “Catwoman” will no doubt shape up to be one of her coolest series yet.

Final Verdict: 8.5 – A conventional story is more than made up for with dark tone and wonderful artwork. Also, so many cats.