In an attempt to understand the murder and mayhem of the pantheon, Laura tears up a deity-filled dancefloor in search of answers… 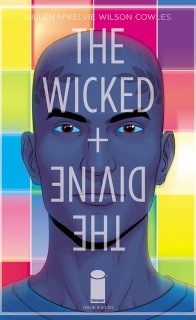 Now the eleventh god is here, it’s time to party. You’re invited. Everyone’s invited. We can sleep when we’re dead-but when you’ll be dead within two years, you may as well turn up in your pyjamas.

“The Wicked + The Divine” is a singularly current comic book. From McKelvie’s smooth, clinical art style to Gillen’s bleeding edge youth vocabulary, this is a book that couldn’t have been produced in any other time but the present. But the thing that elevates this series beyond the myriad tv shows, films, and even adverts, that have attempted to harness meme culture to reel in a younger audience is this comic’s sense of authenticity. Gillen’s not using throwaway references to Facebook, fangirling, and super-powered foreplay just to curry favour with his audience, he’s as immersed in the culture his comic mirrors as his reader is. And that self-belief, that fanaticism, translates to the page in a truly electric way.

Laura is a completely believable modern day leading lady, presented without judgement in all her obsessive, passionate, fierce, loyal and, often naive, glory. She, like so many other millennials, is far more complicated than the majority of the world gives her credit for. On the surface she’s shallow, superficial, and focused on celebrity over everything else but, under Gillen’s guidance, we begin to see that the same tenacity that has enabled Laura to track her favourite artists across London for hidden gigs could also be employed to trace a killer of gods. For seven issues Gillen has charted her fanatic pseudo-stalking of ‘The Pantheon’, following a different member of the god squad each time, as she tries to get to the bottom of the murder of her crush/idol/friend Luci, and this issue it’s the turn of Dionysus, the Greek god of wine and partying. As each of the gods corresponds loosely with a musical genre, this issue also sees Laura drawn underground for an illegal rave night that’s equal part electro disco and drug-fueled Bacchanal.

This issue feels a little different from the ones that have come before it, in terms of pacing and focus. While most of the other issues feature prominent cameos from their representative deities, Dionysus takes a relatively backseat role in the proceedings, serving instead as a combination dealer/DJ. With the rest of the pantheon in attendance, he’s happy just to act as the facilitator, offering up a rave to end all raves. It’s also a little slower than previous issues in terms of narrative, meaning McKelvie’s artwork is really the main feature for the twenty-something pages. As with previous issues his clean linework and modern, polished finish are on full display but, once we get inside the party, his paneling undergoes a thorough and thought-out restructuring, limiting himself to four, barely chronological, panels per page, counterpointed by numbers that represent the 4/4 pounding beat of trance music.

The balance of images in this issue is a beautiful thing to behold. As Laura cuts a drug-fueled path across the dance floor she’s greeted by different members of the pantheon in a more relaxed environment than we’re used to seeing them in. Consequently the audience gets to see a far more laid back version of the gods than we’ve previously been privy to. With mainly mid and close-up panels McKelvie’s ability to display emotion through faces is given a chance to shine. Matt Wilson’s colours are out in full force too, with a polychromatic explosion of psychedelic hues that paint the dancers in a kaleidoscope of colours, loosening this issue’s grip on reality even further.

McKelvie and Wilson manage to utilise their art to track the trajectory of a drug trip, oscillating between happy, diffuse colours and harsh, disorientating blurring that can leave you feeling almost seasick at times. When the high finally wears off and the colours drain from the panels you’re definitely left wanting another hit.

And, while it’s true that this issue doesn’t rush along at the pace of some of its predecessors, that doesn’t mean there isn’t a focus to it. Gillen’s writing almost feels like poetry at times, obscure and laden with double entendre, but every word is another clue for Laura to try and piece together. Gillen does away with thought boxes almost entirely in this issue so that we’re forced to make do by inferring what the characters mean by what they say (and, more importantly, what they don’t say). potentially the most cryptic issue yet, #8 is packed full of subtle looks and loaded statements that only become less inscrutable after a second (and maybe even third) readthrough.

On the surface, “The Wicked + The Divine” is a gloriously enthralling whodunnit that explores the power of teenaged angst and raw emotion, ramped up to godlike levels. While most of the previous issues have been examinations of the ways in which teenagers differ from one another – taste in partners, taste in clothes, taste in pretty much everything else – #8 shows that even the most disconnected youths can bond over a truly shared experience. It’s real, raw, almost tangible at times, and if there’s one thing that youth culture craves more than anything else in this commercialised era of soulless conglomerates, it’s authenticity.

Gillen, Mckelvie, and their team have created a comic that is stylish, sexy, and stunning, but it’s their unwillingness to compromise the soul of their brainchild that makes it so successful. If you’re not reading it already, it’s probably time that you started.

Final Verdict: 8.5 – A slower paced issue that proves that WicDiv is just as entertaining when it’s contemplative as when it’s crazy.