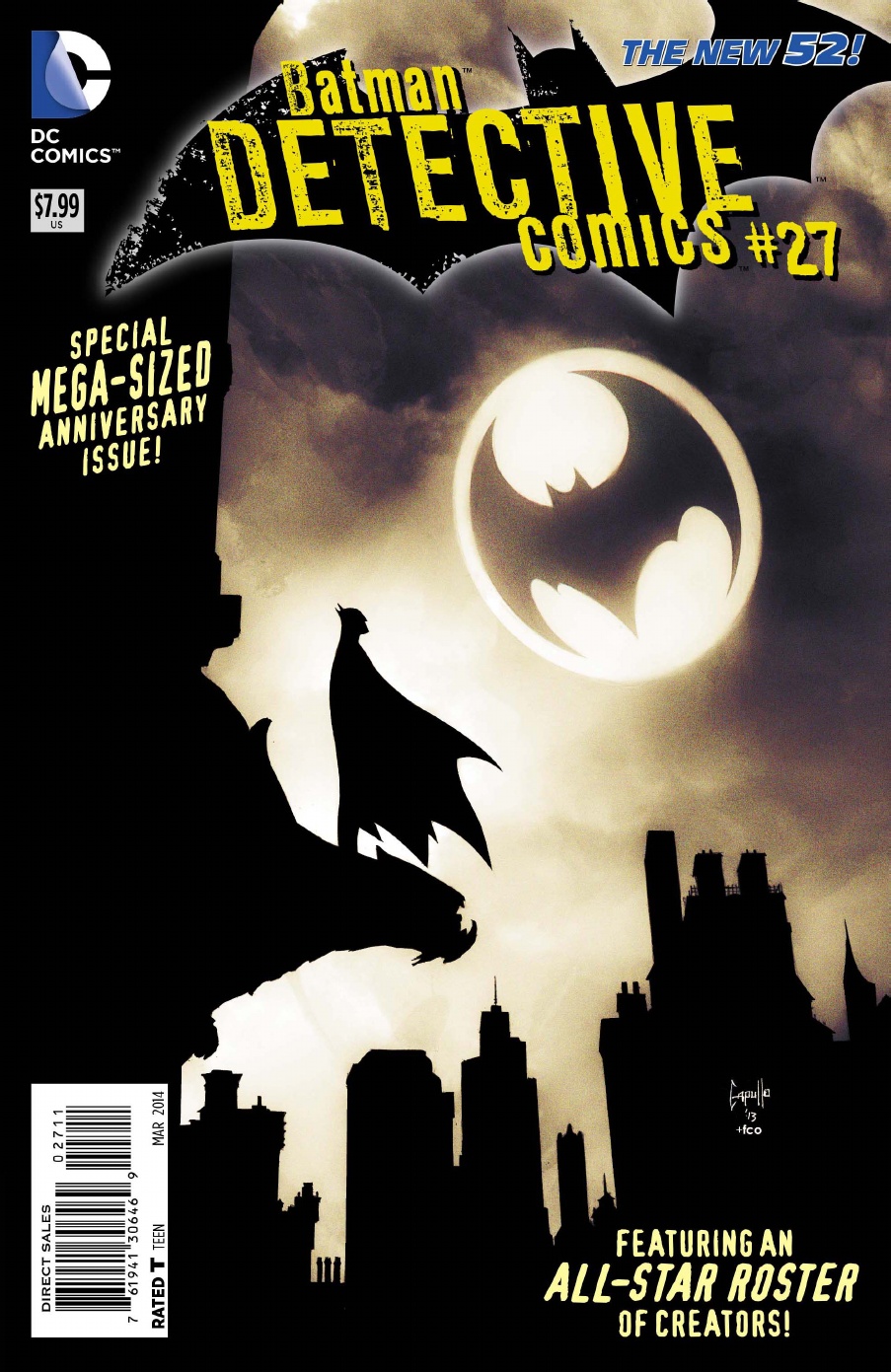 To celebrate the 75th anniversary of Batman’s debut in it’s famous namesake, “Detective Comics” #27 assembles a creative dream to create a book that encompasses and honors the past, present and future of the Dark Knight. 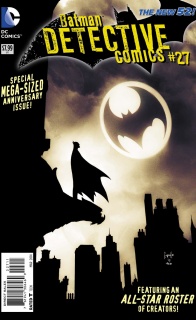 It may have taken an issue or twenty-six for “Detective Comics” to hit its stride, but with issue #27, the series created a world, and a legend, that has grown larger and darker than anyone could have predicted. It’s been 75 years since Batman stepped out of the shadows and started a cycle of change and reinvention, and now that “Detective Comics” #27 is new again, an all-star cast of writers and artists have gathered together to celebrate the Dark Knight. Featuring no less than seven stories, it seeks to encompass the past, present, and future of the Caped Crusader.

The issue opens with a retelling of the very first Batman story, ‘The Case of the Chemical Syndicate’, updated by the highly touted creative team of Brad Meltzer and Bryan Hitch. Of course Meltzer has made sure that the dialogue has been smoothed and the now-common first person narration is included, it’s actually remarkable how well the basic beats of this 75 year old story hold up. Bruce Wayne, charming rich playboy, throws a fancy soiree, only to bolt when the police mention trouble at a chemical plant. Donning his fearsome disguise, the Bat-Man fights crime, brings thugs to justice, and outruns the Police Commissioner. Meltzer’s gives Bruce an interior monologue that actually does a very good job addressing the many layers and motivations of character, even if it does get slightly repetitive towards the end. The main problem with the story comes at the end, when a classic villain get shoehorned in, and it just feels unnecessary. Bryan Hitch’s art is rather striking, and he actually manages to get a look of genuine fear on Batman’s face, before a very cool escape sequence.

After a mixed run on “Batman: The Dark Knight”, the red-headed stepchild of the Bat-series, Gregg Hurwitz hit a surprising home run with his story. Of course, being paired with a legendary, and to some the definitive, Batman artist in Neal Adams greatly improves the chances of telling a great story. This is one tale in the book that truly honors all the periods of the Dark Knight’s colorful history. It’s all here, the early earnestness, 60’s camp, classic O’Neil/Adams era, dark and gritty, and modern realism, all with a neat meta-narrative to tie it all together. Interestingly, Hurwitz doesn’t shy away from the element of existential horror to be found in one man wages an unending war on crime for three quarters of a century, but he keeps the story getting too bleak and sad. Neal Adams is truly amazing here, changing his style effortlessly to fit any era from the first Kane drawings, to Miller-esque grimness, and the realistic New 52 look. The man could still be drawing the series today, and it was a great choice on the part of DC to have him represent the full breadth of Batman’s illustrated history.

Peter J. Tomasi and Ian Bertram deliver possibly the most charming tale out of the whole bunch, set on the day of Bruce Wayne’s 75th birthday as the whole Bat-family gathers to celebrate. It’s a much more cheerful look at Bruce’s future than is normally seen, even featuring a 117-year old Alfred who’s still as wry as ever. Bruce’s party is cut short when the Bat-signal lights up the sky, and he sends the team out to investigate. Then Bruce pulls out his own cape and cowl, ready to take on the worst of Gotham one more time. Tomasi and Bertram did a great job using the story and the art to weave together various Batman futures, including homages ‘The Dark Knight Returns’ and Grant Morrison’s “Batman” #666. It addressed Batman’s main theme, that the fight always goes on, but gave readers an old version of Bruce not bogged down by bitterness and self-loathing.

Francesco Francavilla takes a less is more approach, and his story only clocks in at a scant 4 pages and roughly ten lines of dialogue. But Batman has never been a person of many words, and the brevity, combined with Francavilla’s gorgeous art, makes the story feel in-tuned with the character. Things are bad, Batman shows up, saves the day. It’s worked for this long, and Francavilla is wise enough not to mess with a winning formula.

Just like most sitcoms, the low point in this issue arrives when someone decides to do an It’s a Wonderful Life story. In ‘The Sacrifice’ from Mike Barr and Guillem March, the Phantom Stranger pops up to show Bruce Wayne what his life would have been like if his parents had not died that night in the ally. What transpires is a fairly predicable series of butterfly effects (Dick Grayson on death row! Jim Gordon brutally attacked! Gangs running the city!) while Bruce tries to enjoy a normal life and regular sleep patterns. It’s not particularly exciting or surprising, and doesn’t have any sort of time to engage emotionally with the reader. It reads like a fairly by-the-numbers alternative reality story, and there’s just nothing to get worked up about.

Also featured in this issue is the first installment of ‘Gothtopia’, the next storyline in “Detective Comics” from John Layman and Jason Fabok. It stands out for being the most ordinary thing featured in the issue, and doesn’t really fit the tone of the rest of the stories. With page after page to honor the full history of the character, having something that feels just like any other Batman story makes it feel out of place. Add in the fact that the whole story is a villain induced dream sequence set in a world nothing like the regular Gotham, that goes on for for too long, it becomes downright odd. There are positive things about the story, particularly the art from Faber, but it would have served both the anniversary issue and the story itself if it had been held off until issue #28.

The final story comes from currant “Batman” writer Scott Snyder and reteams him with Sean Murphy, his co-creator on “The Wake”. ‘Twenty-Seven’ takes Batman two hundred years into the future, into a world where the original Bruce Wayne has created a system of clones to ensure that there is always a Batman to protect Gotham. The latest Batman has just awaken, and listens as his predecessor tells him of the past two centuries as each Batman creates their own world of allies and villains for twenty-five years, before spending the final two preparing for their successor. Snyder has proven himself to be a master storyteller, and he knows the exact amount of information needed to create a series of fleshed out worlds, without the standard traps of overdone exposition. Murphy’s art is a great fit for the story, as his style is visually beautiful while always maintaing an air of menace to everything. Murphy only needs a couple of panels to create a whole series of future Gothams, all with their own version of the Batman. This was a great story, and should make any reader crave a Snyder/Murphy “Batman: Year 200” series.

It’s been 75 years since Batman first walked into the night of Gotham City, and became one of the most iconic characters in popular culture. Batman has had more iterations and revamps than can be counted through his history, and is constantly reinvented for every new medium and new generation. “Detective Comics” #27 manages to live up to its legendary namesake, and honors all the eras of Batman’s history. A team of creators that has been involved with the character for over 40 years was assembled to give their own takes on Batman and his world, and while some of these stories are more successful than others, they all try to say something about why this character has captivated people for so long. Everyone can have their own Batman. The costume changes, colors go from light to dark and back again, but the core of the character stays the same. Batman fights crime and brings the light of justice into the shadows, going where normal people fear to tread. There will always be Batman. The Dark Knight was having adventures long before most of the people reading this were born, and Batman will be having adventures 75 years from now, when “Detective Comics” Vol 8 #27 is published.

Final Verdict: 8.5 – Buy. While one or two stories fall flat, the rest are great and do an amazing job honoring Batman and everything the character has stood for throughout the past 75 years.