With issue #17, “Green Arrow” gets its third regular writer (not counting the fill-in #0 written by Judd Winick) and its fourth (or is it fifth?) artist since the New 52 launched in September 2011. Will this iteration finally be the one that clicks? 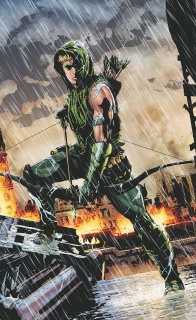 • Welcome the new team of writer JEFF LEMIRE and artist ANDREA SORRENTINO!
• As Ollie struggles to come to terms with the loss of his fortune, his company and his heritage, he discovers a shocking truth about his father that ties to his time stranded on an island before he became Green Arrow.
• Plus: Green Arrow battles the deadly archer known as Komodo!

The baffling lack of a solid Green Arrow comic really is astounding. Oliver Queen has a few really defined characteristics that could easily be used as cornerstones for a new run. He’s one of the few truly political superheroes, always being a staunch Democrat; he is as wealthy as Bruce Wayne, but without a lot of the baggage; he has had a long-term love interest, but is also a womanizer. He’s a complex, fairly unique character, who hasn’t had a classic run in a very, very long time. This issue gives hope that maybe this is the start of something new and exiting – and perhaps that elusive streak is just starting now.

Jeff Lemire, suddenly the busiest writer in comics, is at the helm for this new direction, wastes no time in configuring the series to his specifications. Characters established earlier in this volume are dispatched of rather quickly, and just about the entire world built through the prior 17 issues is gone by issue’s end. What is left when the world is ripped from the book is Ollie, free of baggage and bullshit, ready to be have new adventures in the Lemire model. This isn’t to say that the earlier issues are just forgotten about or dismissed thoughtlessly; Lemire does as tasteful of a mercy kill as possible, but the implication is clear: this is not last month’s Green Arrow.

The tone of the issue is vaguely apocalyptic; it starts off with Ollie collapsing in the desert, about to “die alone,” and then rewinds to show Ollie’s word buckling and shattering underneath him. Suggested throughout is the idea of wasted promise, which is a fairly humorous theme given all the missed opportunities of this title’s run thus far. Ollie’s trust fund is wasted on this petulant party boy, his superheroics are wasted when he can’t do right by the people who matter to him, even his trick arrows are wasted when they’re turned against him by a mysterious archer named Komodo. Komodo isn’t given too much to do, but in a short amount of time, he shows himself to be quite the marksman, as well as a pretty cold blooded bastard. For a character with as long of a publishing history as Ollie, he doesn’t have too many marquee villains; Komodo, just based on his debut, has potential to get there. Not that his appearance is the stuff of legend – he is effective, but this isn’t a show stopper – it is merely a simple, effective introduction. At the end of the issue, after Komodo shows off his superior bow skills, Ollie isn’t quite lying at death’s door as he is on the first page, but he somehow seems even worse off, faced with a bizarre confrontation and stripped of almost all that matters.

That final confrontation, which I don’t want to spoil, has ties to one of the great long-form mysteries of our era, the television show Lost. While “Green Arrow” hopefully won’t feature a flash sideways at its lackluster conclusion, a major theme of Lost is present: that of destiny. Ollie’s purpose and destiny are challenged, and he is forced to look at his life differently moving forward. The issue ends on somewhat of a cliffhanger, and just how deep down the rabbit hole Lemire is planning on going remains to be seen. While I did not read the entire runs of either JT Krul or Ann Nocenti on this book, I did give both of their first issues a chance, and from a storytelling standpoint, this is the only one that seemed like it was worth a return trip.

Those books also lacked what this book has in spades already: a clear tone. A huge part of this is due to new series artist Andrea Sorrentino, late of “I, Vampire.” Sorrentino pencils, inks, and colors the issue himself, and because of that, his aesthetic is unmistakable. While it is clear that it is the same artist who drew vampires for the past year and a half, Sorrentino takes the gothic touches of his past work and, instead, turns that touch to the intricacies of such banal setting as the office building or the city street. The offices of Queen Industries have the requisite ferns and bad art, and the city seems neither too glamorous or too gritty to be unrealistic.

For the first few panels of the issue, Sorrentino plays it pretty straight, but it isn’t long before the book starts taking on some touches that set it apart, visually, from just about every other DC book. As early as page 3, Sorrentino starts peppering stark, black and white panels (with one popping color) into the pages. This has a disorienting effect, and could be overused in the wrong hands, but that isn’t the case here.

One page later, Sorrentino introduces his second distinctive choice of the issue: boxes. The way certain panels are constructed, there are black and white sections boxed off within the main panel. There is no elegant way for me to describe this, so take a look for yourself:

The technique is similar to singling out out a target in a scope, and the effect is unique and stimulating. From there, the layouts become more chaotic, and feature large panels, small panels, panels within panels, more of this highlighting technique, and sometimes even color reverse panels within panels. If it sounds unusual, it is – but it is also allows the reader the feel Ollie’s confusion, fear, and paranoia in a really visceral way. At first, I found it a little jarring, but looking back, this was a wise, wise move.

So where does the issue leave the character? The short answer is that it leaves him open to just about anything. It doesn’t, however, set him up well to join the new “Justice League of America” book, as the story Lemire and Sorrentino are telling is something so far outside the team book’s realm. It’s hard to see the Ollie at the end of this issue either getting or taking Steve Trevor’s phone call. I’m sure there will be a fine in-story reason for this to happen, and it really isn’t a concern of this issue. That’s up to Geoff Johns and Jeff Lemire to hammer out.

This issue feels like a sea change moment for “Green Arrow,” and is an exciting starting pistol for the new creative team’s run. One of the incredibly frustrating things about the New 52 has been the lack of a clear direction for many of the books. For every well crafted book like “Animal Man,” not coincidentally another Lemire joint, there is a “Superman” or a “Green Arrow,” books that have absolutely no consistency in tone, story, or team. If the books had a slower roll out, perhaps the right creative teams could have been paired on books, to avoid so much change. Because, let me tell you, if this was the first issue of “Green Arrow,” this book would’ve been praised as one of the best books of the relaunch.

Of course, this is a flawed argument as well, as creators need time to work on their books and gain traction, and it is only through the flops of the past two creative teams that this one was allowed to take the book in such a radically different place. So, in a weird way, thanks JT Krul and Ann Nocenti for not knowing how to write Oliver Queen. Your mistakes paved the path for this book, and for that, we are all thankful.