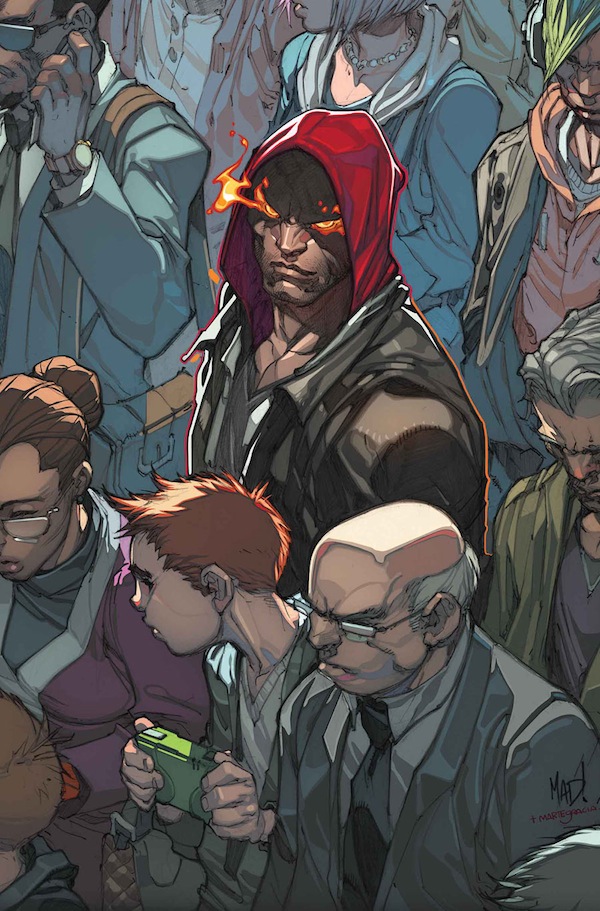 After an unfortunate delay, “Inhuman” has finally arrived in stores to show readers how the titular group totally aren’t mutants. 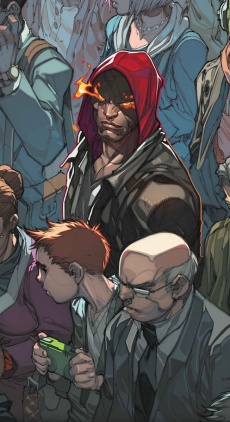 The Inhuamans have been part of the Marvel Universe since 1965, making them older than the Punisher, Venom, and even Wolverine. Despite their apparent longevity, the Inhumans have remained relatively small players in the constant battles and upheavals that occur across Earth 616. Recently, however, the group has been slowly taking a more active role in global affairs. Inhuman Queen Medusa joined the Future Foundation, part of Matt Fraction’s acclaimed run on “FF”, while King Black Bolt has played a large scale role in several of Marvel’s company wide crossovers. Now, in a new self-titled series from Charles Soule and Joe Madureira, the Inhumans are prepared to take center stage in Marvel Universe, although not all Inhumans are thrilled by the change.

The series takes off from the aftermath of the “Infinity” story arc, after Black Bolt denoted a Terrigen Bomb, unleashing the Terrigen Mists across the world. Brief history lesson: the Inhumans are the result of alien experimentation on early humans hundreds of thousands of years ago, that resulted in a dormant gene in the genetic code of a selected number of people. When exposed to the Terrigen Mists those with the gene rapidly evolve in unpredictable ways, gaining hard to control superpowers, and becoming Inhuman. The mists have triggered these changes in thousands of people, and now the world has to adjust to a new group of super-powered people running around.

Charles Soule came on-board “Inhumans” later in the process, after announced writer Matt Fraction and Marvel agreed that they had differing visions. To Marvel’s credit, they did give Soule the time to craft a new book from scratch, and not have to pick up the pieces from exactly where Fraction left them. Nevertheless, the book does have a bit of a disjointed feel, jumping around the globe as more Inhumans awaken. It would have been easy to follow if the main characters where Black Bolt and Medusa, whose history is laid out on the introductory page. Instead Black Bolt is missing, Medusa appears in about of third of the book, leaving the the audience to follow a bunch of new characters with little sense of direction. The bad guy, Lash, gets the most page time, and he seems to have more layers than either of the possible protagonists.

The audience surrogate is Dante, a new inhuman whose powers involve, you guessed it, fire. The reader knows that they should care about Dante because there are approximately two dozen things wrong with his life. it has the desired effect, endearing Dante to the reader, but Soule does lay it on a little thick. The creation of Lash is the best decision that Soule made in this issue. His role in the story allows for a good deal of exposition with the minimal amount of awkwardness, which becomes apparent when Dante goes on a rambling speech that seemingly details every aspect of his life. While Medusa, as the only previously known character appear in the book, fits nicely into the protagonist role, her motives are unclear and therefore are difficult to root for. Lash, as evil as he may be, at least has a clear plan that’s simple enough to follow, complete with a rational-ish explanation. Medusa’s role as Queen seems to paint the world of the Inhumans as somewhat archaic and black and white, but by creating a character like Lash that explicitly rejected this hierarchy, Soule is able to show that this new corner of the Marvel Universe is a bit more complicated than it looks.

Joe Madureira is a legendary artist at Marvel, having pencilled “Uncanny X-Men” from 1994-97. This was at the height of the X-craze of the 1990‘s, a time in comic history often looked at with equal parts fondness and scorn. Madureira has a very particular style, and whether or not the reader enjoys the look of “Inhuman” is heavily linked to their opinion of Madureira’s unique images. Some of these characters are lumbering behemoths, and the men have arms bigger than their heads, while the woman always know just how to strike a sexy pose. Without the cover date, it’s entirely possible that the reader could think this is a 1996 Image comic, and not the next big thing at Marvel.

That’s not to say that the art is uniformly bad, quite the contrary in fact. Large amounts of the book are rendered very well, and Madureira should be commended for the level of detail he puts into the background. With a style that emphasize actions, it would be easy for smaller details to be forgotten, but instead each setting appears unique and fleshed out. The issue’s main action scene is quite thrilling to view, and Madureira makes Medusa’s super powered hair look like the deadly weapon it truly is. Dante bears a striking resemblance to the Human Torch, but this is almost unavoidable given his powers. Madureira was able to make the character unique by having Dante appears as as a hardened chunk of lava after his flames disappear, instead of a normal person a la Johnny Storm. It’s details like that that paint the Inhumans as something a little different than what’s typically seen from Marvel superheroes.

“Inhumans” #1 throws a lot at the wall, and unfortunately not a lot of it seems to stick. For every moment that writer Charles Soule successfully integrates background information as part of the story, there’s another scene where everything just spills out awkwardly, as with Dante. And for everytime that artist Joe Madureira draws a thrilling action scene, there’s a panel where somebody’s leg is larger than their torso. There is definitely potential to the Inhumans, and Disney likely has bigger plans for them, but what the series needs right now is a little more focus and clarity.