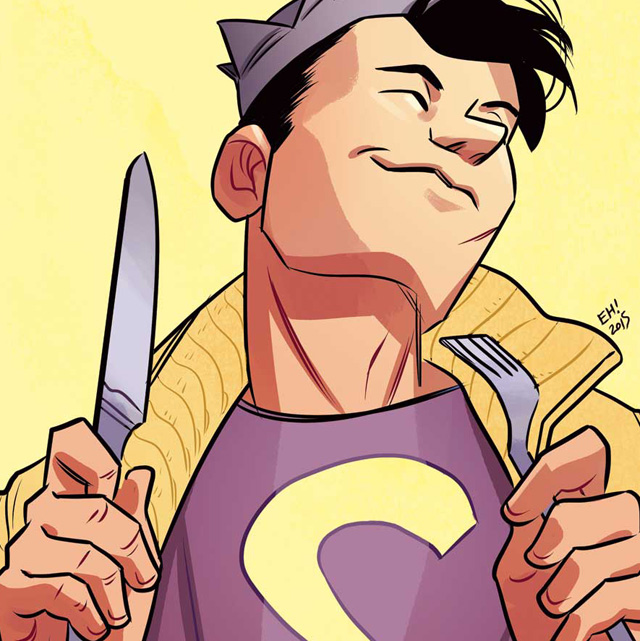 The Archie Revolution continues as Chip Zdarsky and Erica Henederson tackle everyone’s favorite glutton, Jughead! Check out our review of the first issue below! Spoilers ahead! 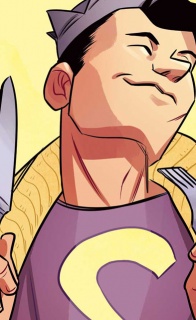 IN THE GRAND TRADITION OF COMIC BOOK REBOOTS LIKE ARCHIE #1, ARCHIE COMICS PROUDLY PRESENTS… JUGHEAD #1—FROM THE COMICS DREAM TEAM OF CHIP ZDARSKY (Howard the Duck) AND ERICA HENDERSON (The Unbeatable Squirrel Girl)!
Riverdale High provides a quality education and quality hot lunches, but when one of those is tampered with, JUGHEAD JONES swears vengeance! Well, I mean, he doesn’t “swear.” This is still Archie Comics after all.

In the musical Hamilton, the young founding father asks his friend and eventual murderer (not a spoiler) Aaron Burr, “If you stand for nothing… what’ll you fall for?” That quote is emblematic of Hamilton’s character: a youth yearning for a cause to die for, who refuses to let injustice float by him. There are a couple difference between Hamilton and Archie Comics’s “jughead” #1, but it’s Alexander’s question that lives at the heart of both stories.

For most, if not all, of his life Jughead Jones has been an observer. To Archie and the rest of Riverdale High, he is a Greek chorus privy to all their misadventures and shortcomings. Sure he can get into some hijinks himself, but for the most part Jughead wants to eat his burger in peace. Even when his family fell from grace, their fortune gone in smoke, Jughead didn’t rally to try and save his family’s legacy. For decades, he has been resigned to his station in life. And that’s where “Jughead” #1 starts, with Jughead heading to school with Archie after finishing a Skyrim-type game in one sitting. As he explains, “I move so little and eat so much, I no longer need to sleep to feel rejuvenated. I am like unto a god, Archie Andrews. Respect me as such.” The look on Archie’s face shows that no part of that speech was untrue.

As Jughead makes his way to the classroom, glibly walking past Betty’s petition to save the town’s ofrest and Mr. Weatherbee’s retirement announcement, it seems that nothing can make its way into Jughead’s, uh, cranium. That is, until Weatherbee’s replacement begins replacing the school’s gourmet lunches with literal gruel. Here, the battle lines are finally drawn.

What’s nice about “Jughead” #1 (besides all the existentialist bits) is how the humor itself feels connected to some semblance of reality. Jughead isn’t just an insane otherworldly being obsessed with hamburgers as a punchline. He’s a fanatic who’s just learning to come out of his shell. Whether its through deciding to help his friends or even (shockingly) learning that people can actually cook hamburgers, the fun in “Jughead” seems like it’lll primarily stem from watching Jughead grow as a friend, student, and activist for greasy beef sandwiches everywhere. It’s weirdly endearing, especially since Jughead’s obliviousness can be traced back to “weird rich kid.” That’s not to say “Jughead” doesn’t stick to reality for the entire time. After learning that his school won’t be serving hamburgers anymore, Jughead collapses and wakes up in a “Game of Thrones” fantasy inspired by his Skyrim playthrough. It’s… okay? It wasn’t a bad sequence or anything, but I hope this isn’t going to turn out like “Harley Quinn” where we spend a couple pages each issue doing some unnecessary pop culture riffing.

Still, I can only hope that Erica Henderson’s going to stay on this project for the long haul. Her art here feels more cinematic than in “Unbeatable Squirrel Girl”, with a nicely done intro sequence and character expressions that come off as authentic. Henderson also tends to be a little more realistic here, so when things go crazy like when Jughead enters the kitchen for the fist time in his life, the ensuing wackiness contrasts nicely with the rest of the book. Plus, little details like Jughead’s malicious shadow in the kitchen really help separate this book from the “Archie” reboot and give it a personality completely its own.

While “Jughead” #1 strays into some shallow territory with its “Game of Thrones” parody, the rest of the book promises to bring some depth to Riverdale’s favorite sidekick, while fleshing out some more of the rebooted Riverdale. I don’t think anyone expected a Zdarsky/Henderson book to not be a roaring good time and I’m happy to say they didn’t dissapoint.

Final Verdict: 8.3 – A strong debut for one of Archie Comic’s strongest characters.