In the wake of Wolverine’s death a ragtag bunch of faces from his rogues’ gallery find themselves inextricably caught up in a potentially fatal web of secrets. How far will they have to go to save themselves? And will they be able to step out from under Logan’s shadow in the process? 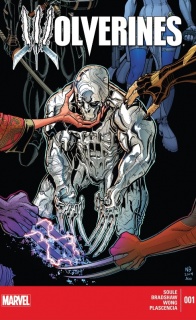 Wolverine may be dead… but what will happen to his mortal remains, encased in something as rare and powerful as Adamantium? The battle for control of this valuable artifact has begun! Murder, mutilation, betrayal and trauma- none will be spared!

“Wolverines” is a fantastic concept for a comic book. Bringing together a bunch of (essentially) terrible people and forcing them to work together in order to ensure their own continued existence should result in some of the most explosive on-page conflict that Marvel has seen in a long time. When I heard about the line-up for this comic, namely Mystique, Sabretooth, Daken, Deathstrike, and X-23, I was imagining something somewhere between “The Thunderbolts” and Kyle and Yost’s run on “X-Force”, a darker narrative, full of secrecy and savagery.

Soule and Bradshaw’s opening issue definitely touches on the possibility of a more violent and volatile world than we’re used to seeing in most mainstream Marvel stories, but it does feel slightly oddly balanced at times, perhaps feeling the strain of delivering a more serious comic book and appealing to the more mass market audience that anything associated with Wolverine inevitably draws in.

During the multiple aftermath tie-ins from the “Death of Wolverine” series we discovered that a relaunched version of the Weapon X Program (named Paradise), headed by Dr. Abraham Cornelius, had created a bunch of prototype supersoldiers to sell off to various governments. On top of that, he spent time capturing pre-existing supes’ with ties to Wolverine and implanting suggestible key words into their psyches, creating sleeper soldiers that could be activated or dispatched with at a moment’s notice. “Wolverines” picks up directly after these tie-ins, showing an tenuously linked team of old-school faces and new Weapon X’ers having to team up and head back to Paradise to make sure that the failsafes implanted in all of them are disarmed and they can continue to live.

While the opening few pages of this issue are pretty blood-soaked – a flashforward that hints to a rather grisly finale for the first arc – there doesn’t seem to be too much in the way of immediate danger in terms of any of the characters’ well-being early on. This is potentially because Soule has offered up a team of relative unknowns in the X’ers, whose deaths wouldn’t be particularly poignant at this point, against a quintet of established characters with accelerated healing factors and backstories long enough that we can be confident they’re not going to be killed off lightly. Also, the opening few pages are slow to pick up, with the characters playing an extended version of ‘the pronoun game’ regarding the secret package that Shogun, one of the X’ers, wants recovered from Paradise, which anyone who’s been following will have already worked out could only be Wolverine’s adamantium-coated corpse.

However, as the issue gets underway it gains focus and, as is so often the case with this mercenary bunch, they really come into their own as they get into battle.

Soule splits his team up into pairings of Xer’s and classic characters and it’s a great opportunity for us as an audience to get a glimpse into each character’s different connection with Logan. In a particularly well scripted section between Deathstrike and newcomer Skel, we see how her fascination with Logan has defined most of her life and Skel points out that her obsession with him is precariously close to infatuation.

On approach to the facility the titluar “Wolverines” are faced with the constantly underestimated force of The Wrecking Crew, clearly here to do some rare-metal-grave-robbing of their own. As the two opposing teams go head to head Bradshaw throws out some beautifully fluid battle sequences, displaying the truly chaotic nature of a super-powered brawl without sacrificing coherence. The colouring throughout is solid, although I would have possibly prefered something a little more muted considering the characters we’re dealing with. That being said, the vibrancy does make for some really arresting spread panels, and the colour, when matched with the panel layout, almost makes The Wrecking Crew battle feel like an homage to the golden era of comics.

Bradshaw’s execution of the different characters in this series is really impressive, but it’s the character design that struck me immediately. The X’ers seem to have lapsed into something resembling paramilitary superhero garb, and Bradshaw balances this nicely against the better known characters by electing to strip them back to their most recognisable and iconic costume designs. And I’m sure it’s not by accident that Sabretooth and Daken both look suspiciously like variants on Wolverine costumes we’ve seen before.

I have to admit, I was still unsure about this issue until the final few pages, but the revelation of this arc’s big bad, a classic X-Men antagonist, sealed the deal for me. He ‘ports in full of disdain and monologuing like he was summoned straight from the 90’s, and, through both Soule’s beautifully melodramatic scripting and Bradshaw’s dynamic art you get the feeling that this is going to be a truly difficult villain for even the combined forces of Logan’s Legacy and the new Weapon X’ers to overcome.

For anyone who’s been following the Death of Wolverine saga, “Wolverines” looks to be a solid continuation of the Logan mythos. If Soule can continue to balance action with introspection as the people Logan has left behind start to reevaluate themselves without him in their lives then I think this book should be a really great read for 2015.

Final verdict: 8.0 – A fitting beginning to an era without Wolverine. Soule and Bradshaw are making sure 2015 will still be full of ‘Snikt’s and subterfuge.