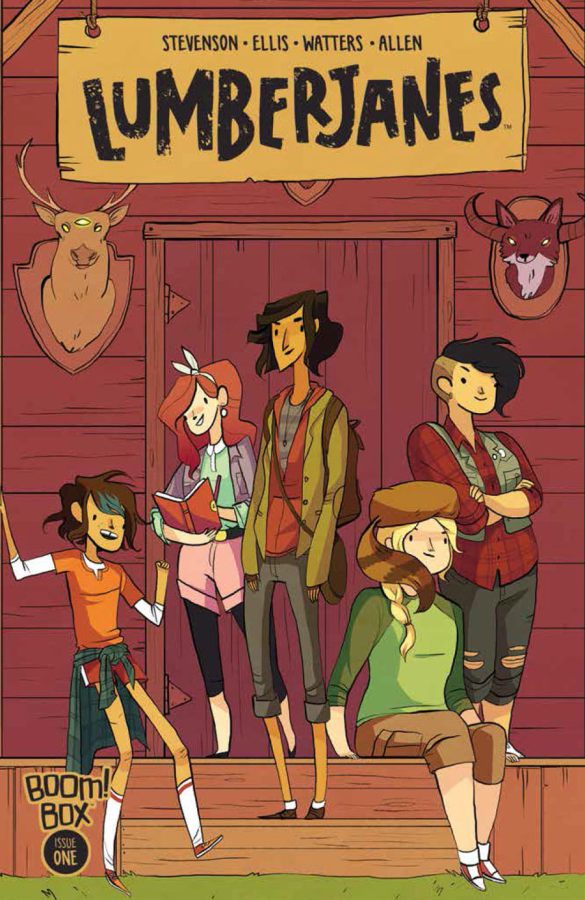 “Lumberjanes” #1 is a winning effort from a talented group of writers and artists that have a good bead on what makes for funny, all-ages storytelling. Read our ‘Pick of the Week’ review to find out why you’ll love it too. 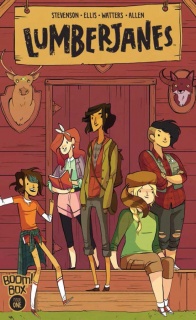 WHY WE LOVE IT: Five best friends spending the summer at Lumberjane scout camp…defeating yetis, three-eyed wolves, and giant falcons…what’s not to love?!

WHY YOU’LL LOVE IT: It’s Buffy the Vampire Slayer meets Gravity Falls and features five butt-kicking, rad teenage girls wailing on monsters and solving a mystery with the whole world at stake. And with the talent of acclaimed cartoonist Noelle Stevenson, talented newcomer Grace Ellis writing, and Brooke Allen on art, this is going to be a spectacular series that you won’t want to miss.

WHAT IT’S ABOUT: Jo, April, Mal, Molly and Ripley are five best pals determined to have an awesome summer together…and they’re not gonna let any insane quest or an array of supernatural critters get in their way! Not only is it the second title launching in our new BOOM! Box imprint but LUMBERJANES is one of those punk rock, love-everything-about-it stories that appeals to fans of basically all excellent things.

“Lumberjanes” very decidedly comes straight out of the school of modern cartoons, a general sensibility which has resulted in all ages humor of particularly high quality in recent years. The solicitation mentions Gravity Falls, which is an apt comparison, but it also rides the same wavelength as Adventure Time, Regular Show, etcetera, through a variety of spiritual links.

Writers Noelle Stevenson & Grace Ellis have an “everything-is-awesome” worldview that clearly drips from the work, as a result. As the titular scouts of the Lumberjanes summer camp have their first adventure, sneaking off into the woods after curfew to fight off 3-eyed foxes, the characters do so with a strange mix of awe and, somehow, total preparedness. These girls know kung-fu, if a couple of spontaneously choreographed fighting stances are to be believed. Later, they speak of the events to their camp counselor with a humorous matter-of-factness and an earnest enthusiasm for a completely impossible, yet totally true story.

Like the aforementioned cartoons of the day, “Lumberjanes” punches its script up with a hyper-modern vernacular. These girls talk the way that kids of today talk; using half-realized ideas, misappropriated modern slang, thoughts generated as run-on-sentences, and plenty of onomatopoeia. But they also use turns of phrase which only an adult could understand the true humor behind. “What the junk?” comes to mind as something that a child would find humor in, but an adult would better understand what makes it a funny phrase. Basically, the voice of “Lumberjanes” is an extremely strong and entertaining one. Only the most curmudgeonly of comic fans wouldn’t be charmed by it.

While the humor and the voice of “Lumberjanes” is mostly generated by the script, the sense of adventure and wonder comes from the wonderful storybook art of Brooke Allen. Specifically, the mystical adventure that the girls are confronted with in the opening of the issue is so fantastically rendered that it sets the tone for whatever ridiculous thing is yet to come. As the girls creep through the woods, a sense of foreboding, rustling brush and strange howling are expressed through plenty of visual onomatopoeia that packs the scenery. When the creatures reveal themselves, the confrontation is both humorously staged and beautifully fluid. The lithe, ethereal foxes themselves are an aesthetically pleasing bit of imagery. Apart from the unique and defining designs of the 5 principal characters, these foxes are the most iconic thing about “Lumberjanes” and this sequence is worth the price of admission alone.

The rest of the issue is packed with visual humor, easter eggs, and expressive character work – especially once the story become more expository toward the end of the issue. Allen’s fluid, cartoony style is a boon for a book that is quite clearly in that same spiritual wheelhouse of adventure and humorous intrigue that Gravity Falls and Adventure Time operate in right now. Maarta Laiho deserves credit for making the Lumberjanes camp a super colorful place to hang around in, but also for providing a dark and moody palette for the woodsy scenes, which plays around with our expectations for the book’s approach to adventure. Aubrey Aiese’s charming hand-lettering gives the book a youthful, spontaneous feel, especially again when it occasionally breaks into colorful onomatopoeia.

“Lumberjanes” #1 is 100% charm all the way through. While the irreverent story is a pure attempt at fun, silliness, and friendship incarnate without any baggage, it’s nothing less than an impressive effort from all of the myriad talents that went into its creation. “Lumberjanes” is a labor of love, and it shows, from the lighthearted script to the playful art and lettering. Share this one with your whole family, because summer is right around the corner and it’s not too early for a little camping adventure.