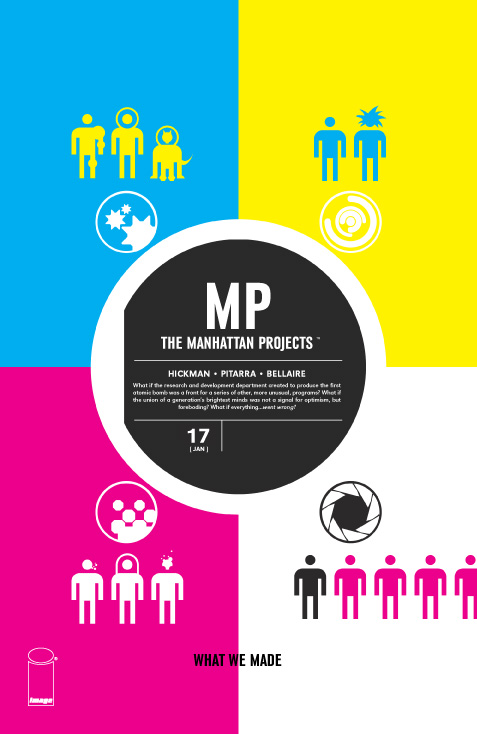 Yeah, “Manhattan Projects” is our pick of the week. Considering that we’ve dedicated thousands of words to our love for this series, this really shouldn’t come as any kind of a shock. Yet, with issue #17, a side of Hickman that has almost never been seen before comes to life, dude. Read our review after the jump! Mild spoilers ahead! 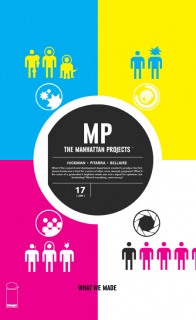 The four secret programs of the Manhattan Projects collide. Old friends at war, new alliances, and so much betrayal.

There are certain things we come to expect from “The Manhattan Project”, or really any Jonathan Hickman work in general. We expect genius lead characters, encumbered by nothing but their intellect and matching hubris. We expect grand dialogue, complementing the gigantic world-altering plots that, may not make sense in the moment, but are but a piece in the gigantic puzzle of a tale that Hickman has crafted. “Manhattan Projects” #17 doesn’t fail to deliver this, as the structure the brilliant yet deranged minds of the early 20th century have crafted begins to tumble all around them. This comic is, once again, filled with violent characters, the breakout star of the last few issues being General Westmoreland who, with his utter “Full Metal Jacket” demeanor has been assisting Oppenheimer in performing the greatest douche chill of all time.

Though “Manhattan Projects” #17 has everything you’d come to expect from Hickman, the characters don’t seem to be the focus of the issue. Instead, a large portion of the story is centered on an entirely new characters whose identity I’d really rather not spoil. His dialogue is a major change from Hickman’s usual biblically grandiose style and is hella casual. Like yeah man, The Manhattan Projects’ll change the course of human history but what about Sublime, man? Honestly the biggest twist in this issue is the change in tone this new character brings. What happens when you throw in a free-wheelin’ dude who’s the type to not be afraid to wear swim shorts to Casual Friday? Hijinks ensue, bro.

Well, they probably would if the situation was any different. As funny as Mystery New Character may be, he’s still in “The Manhattan Projects” and as  a result racks up a body count to match everyone else in this series. Nick Pitarra illustrates these massacres with the gruesomeness we’ve come to expect from his action scenes. In fact, his design for Mystery New Character serves as a monstrous contrast to Hickman’s laid-back dialogue and it’s times like these I think it’s important to know how integral Pitarra is to “The Manhattan Projects.” Without Pitarra, it’s unlikely that the humor inherent in every other page of “Manhattan Project” would be incredibly diminished, if not depleted all together. Pitarra does a masterful job of taking these grand figures and putting them in positions that clash with their gigantic egos. At the same time, Pitarra never goes the easy route of making every page overtly ridiculously. Instead, his is a much more refined and subtle approach that may give you the general memory of “Manhattan Projects” being a dark and gruesome series, but when you pick it up you realize just how utterly silly most of it is.

In a lot of ways, “Manhattan Projects” is very similar to “Breaking Bad.” Yes, both have smart white men who go out of their way to piss in Hubris’s eye by justifying their incredibly illegal activities but beyond that “Breaking Bad” is almost consistently remembered for being an incredibly dark, depressing and violent show. Yes, that was incredibly true, but beyond that “Breaking Bad” had a ton of humor that, when placed between scenes of children being killed or people giving Charlie Rose murderous glances, sucker punched the viewer. “Manhattan Projects” #17 is that humorous moment, situated between a cannibal Oppenheimer, a cowardly Leslie Groves, and a conspiracy with a death toll is in the millions. The plot isn’t moved forward that much, at least directly, but this is definitely an incredibly fun issue that shows how Hickman and Pitarra definitely have more depth than telling stories of terrible people or drawing gruesome illustrations. They know how to tell a fun story beyond the morality play “Manhattan Projects” has primarily been.

Sure, you could argue that this isn’t the most “significant” issue of “Manhattan Projects” or even the most “groundbreaking” but it seems to be a change of pace. A chance for the story to breathe a little, almost like that “Fly” episode of “Breaking Bad” which… not a lot of people liked apparently.

But I liked it. So Pick of the Week.