The latest twist to the Moon Knight saga sees Marc Spector’s world close in around him as he swaps the streets of New York for the walls of an asylum. Jeff Lemire and Greg Smallwood shake the foundations of the Moon Knight mythos, leaving us wondering if Khonshu’s most faithful acolyte is actually just a crazed fanatic. 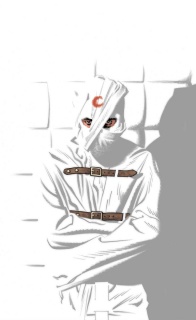 THE BOOK YOU’D BE INSANE TO MISS! Marc Spector (a.k.a. Moon Knight/Jake Lockley/Steven Grant) has been fighting criminals and keeping New York City safe for years… or has he? When he wakes up in an insane asylum with no powers and a lifetime’s worth of medical records, his whole identity (indentities) are called into question. Something is wrong, but is that something Marc Spector himself? Jeff Lemire (EXTRAORDINARY X-MEN) and rising star Greg Smallwood are calling everything you know about Moon Knight into question.

Moon Knight has long been a character floating around at the peripheries of the Marvel Universe. His quixotic, convoluted, and often unreliably narrated origin story might be a turn off for the more casual reader. He’s had multiple lifetimes-worth of careers, from heavyweight boxer to Marine to mercenary, to name but a few. He’s both a millionaire adventurer and a street-level vigilante, and he might be the conduit to an ancient Egyptian god of vengeance. That is, if he’s not just imagining it all.

Often, when he’s seen interacting with other heroes, his character is pared-down to enigmatic financier and strategist – a role often unfavourably compared to DC’s own caped crusader, Bruce Wayne – but by ignoring all the nuances and complications that make Moon Knight Moon Knight, writers are doing the character a serious disservice. While recent creative teams have had more luck mining different areas of the complex psychological possibilities Moon Knight offers up, Lemire and Smallwood seem to have doubled down on the idea of that psychosis.  “Moon Knight” #1 is a phenomenal first issue that puts Spector’s unstable mind under such scrutiny that it threatens to tear the whole book apart.

Opening with a psychedelic nocturnal spread that would fill even Bill Sienkiewicz with awe, Marc is jolted from a late-night communion with Khonshu to find himself locked inside a brutal retro-inspired insane asylum. Unsure of how he got there, or even who he is, he’s bullied and buffeted about by pair of obnoxious orderlies in a series of squirm-inducing ‘therapy’ sessions. Still reeling from the shock of his new location, he’s released into gen-pop, where he meets a cast of strangely familiar inmates, all clamouring unintelligibly, for his attention. Turning to the only being he knows can bring him clarity, Marc manages to find a way to transform himself briefly into a version of the Moon Knight previous readers will recognise, but even that glimpse of mental freedom is short-lived, and the issue ends leaving both us and Spector sure of even less than when we began.

If this all sounds confusing, that’s probably because it is, but thankfully, under Lemire’s confident control, the mystery errs on the side of intrigue, rather than alienation. In an interview Lemire said that he’d be drawing from two of the most popular Moon Knight runs for his turn on the character: Doug Moench and Bill Sienkiewicz’s original run, and Warren Ellis and Declan Shalvey’s recent spin on things. “Moon Knight” #1 manages to harness the same free-falling onerousness that characterised Ellis’s take on Spector. Lemire’s calculated disregard for explanations immediately aligns us with the amnesiatic Spector, and we spend the issue scraping through lines of contradicting dialogue, most of which feel more Freudian than factual, looking for something we can trust. Lemire also draws on Moench and Sienkiewicz’s sprawling list of colourful characters to people the prison that Spector finds himself in, resulting in a fuzzy but familiar series of interactions for both Marc and any keen-eyed reader. Each member of the supporting cast talks in streams of stylised soliloquy that swim past Marc as he makes his way through the asylum. As Marc struggles to get a straight answer from almost anyone, a believable kind of desperation bubbles up, forcing him into the arms of the one constant in his life: Khonshu.

And, while Spector may be all confusion, Lemire’s Moon Knight is certainty. The division between Marc and his alter-ego runs much deeper than the make-shift mask he dons before he ‘pounds the living &$#%’ out of a group of orderlies. We see a decisive change in Marc’s speech — from overrunning sentences to short, sharp declaratives — and in the pace of the narrative — from lethargic jaunt to fast-paced fist-fight. Lemire manages to define the duality of his protagonist with aplomb before the final pages reveal a third, even madder alternative: that perhaps Spector is neither Marc, nor Moon Knight, but that he’s been deluding himself his whole life.

Seing Smallwood back on art duties in “Moon Knight” #1 is really welcome, and it should be noted that he’s really upped his game since his strong stint with Brian Wood. There are multiple levels of ‘reality’ in this issue, and Smallwood manages to shift styles pretty drastically to mark these changes without losing overall visual cohesion. He deserves a special shout out for his scratchy, purple-hued pages that sing as homages to Sinekiewicz’s iconic art. These panels mainly mark what we assume to be visions of Khonshu, or flashes of Marc’s past, and Smallwood manages to fit them in amongst his crisper version of the waking world skilfully.

There’s an indie believability to the physicality of Smallwood’s characters that really reminds me of David Aja’s understated work on “Hawkeye”. Smallwood isn’t given a lot to work with in terms of bombastic action in this issue (aside from one cacophonous splash panel once Spector dons the cowl) but he works wonders with micro-expressions and minute, meaningful bits of body language. There’s one particularly cool sequence in which Marc steals a pen so subtly I thought I’d imagined it, but going back over it again you can see all the visual signposts that Smallwood lays out like breadcrumbs.

This is, without a doubt, a hugely ambitious take on a well-known character. There are levels and levels to Marc’s psychosis being set up in “Moon Knight” #1 that will take months to unravel. The idea that Marc’s been dreaming up these delusions for most of his life is certainly a bold one, but I worry about spending too much time in ‘it was all a dream’ territory, simply because I doubt the big-wigs at Marvel would allow any one creative team to undo 40-something years of characterisation in one fell swoop. With that in mind, it’ll be interesting to see how long Lemire draws out the conceit, and whether he feels obliged to give us any hard-and-fast answers about what’s going on here. We often see big reinventions that claim to mark turning points in a character’s life, or even the world at large, only for them to be retconned or ignored once another team takes over. Perhaps, though, Moon Knight is just the right size of hero to allow for a monumental shift in his world without it causing too many ripples across the wider world of Marvel.

My personal theory (for what it’s worth) is that the whole asylum, inmates and all, are figments of Marc’s mind. I’d like to see an “Arkham Asylum” situation where Moon Knight delves deeper into the halls of his own tangled mind and is forced to confront increasingly distorted versions of the people he’s punished and put away, as well as those he’s loved and lost along the way.  But, regardless of how it turns out, it’s great to see another book coming out from Marvel that is less concerned with keeping up with larger continuity and tie-ins, and more focused on a singular, engaging storyline. Lemire has admitted that he already has the first ten issues of “Moon Knight” scripted and, if this opener is any indication of the quality of the road ahead, I reckon I’ll be with him and Smallwood month after month to see how it all unfolds.

Final Verdict: 9.1 – Vivid, vibrant, and very very weird. Lemire and Smallwood draw on the best elements of a beloved character to tell a new and unusual story for fans old and new alike. This is serial storytelling at its best.