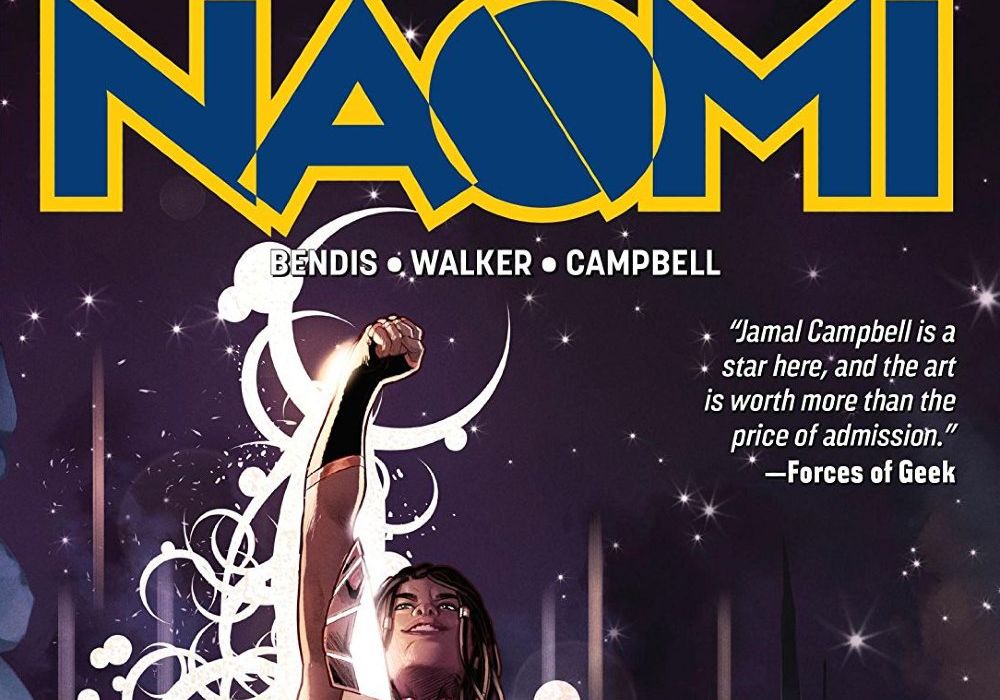 In this issue, Shrek is used as a verb. 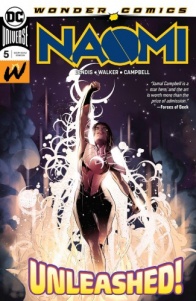 This is it! In this issue, all secrets are revealed! Who is Naomi? Where did she come from? What can she do? And what does it mean for the rest of the DC Universe? It’s the one you’ve been waiting for from Bendis, Walker and Campbell.

When the solicit came out for this issue, proclaiming that “all secrets are revealed!” I wanted to roll my eyes a bit at the shameless hype and distrust that would actually happen. Mostly it was the promise of answers, giving answers to “lore” is a tricky subject that often confuses the idea of world building with storytelling. Other times you could get the LOST finale, where some questions are left emotionally answered but mechanically disregarded. The point of a mystery isn’t so much the revelation that comes with solving it, but the journey and process that figuring out requires. Co-writers Brian Bendis and David Walker thread the needle in revealing the origin of the title character. Ultimately the answers found in “Naomi” #5 confirm what we already know, she isn’t from around here, but the manner in which it is answered helps to place Naomi firmly in the context of the DCU and the Wonder Comics imprint.

What isn’t lost as these answers are revealed is the sense of happiness and joy between Naomi and Ana, as the best friends learn more about one another. The cliché is this knowledge of difference becomes a secret burden for the hero to bear while continuing to fit in with the rest of society. Naomi and Ana are having none of that, as the latter excitedly reacts to every word her friend relays. The circuitous verbal path Naomi takes getting there is shot through with Bendis Speak, which has a sense of authenticity in how people talk but the implementation as speech bubbles makes things a big jumbled at times.

While Naomi tries to get a word in edge wise, Campbell’s character work covers what isn’t said and helps to enhance the script. Both characters are just so happy. Ana for her friend that has finally figured this mystery theirs. Naomi for being able to share it with someone else. Naomi is glowing … before she actually begins to glow. There is a certain stiffness to the figure work due to reaction panels and the use of screen tones and effects for background, but in sequence it works. Campbell gets to artistically flex in a series of spreads but the character acting and raw emotion in these pages is what stands out the most in the issue.

How the creative team realize the story Naomi’s Mother left her has me ambivalent about their overall success. This narration is represented through a series of 5 double page spreads, the issue features 6 overall. Dedicating half of the issues page budget to spreads is a bit much, however as a means to let artist Jamal Campbell go big and bold it makes sense. The pages themselves are beautiful, Campbell’s compositions have a classical feeling to them. These aren’t spreads that are meant to be bombastic and exploding with energy, they’re considered visual accompaniment to the narration that symbolically give extra depth to her Mother’s story. The way these spreads are composed and sequenced feel spiritually similar to Michelangelo working through scenes from the Book of Genesis on the Sistine Chapel. One of the spreads is focused around a ball of light exploding out and revealing some of the figures reborn out of the Crisis and you get that same feeling looking at The Creation of Adam.

Compositionally and as art pieces by themselves they are beautiful and evocative. As pages of a comic book, they are a little boring due to how writers Brian Michael Bendis, David F. Walker, and letter Wes Abbot sequence the scripting of the narration. The lettering does not enhance Campbell’s art, it reads as disconnected from it. On a majority of the spreads the lettering is justified to the right hand side as a column in a series of boxes. Justifying things to the right obviously keeps things out of the way of the art, but the gap disconnects everything and with the boxes it reads as busy when the art is so serene. This is a style not uncommon in Tom King’s “Batman,” but the lettering is often presented it in the style of a hand written letter which recognizes the disconnect from the art and shrinks that distance. No such attempt is made in the lettering of these pages, they just read like normal comics lettering.

The best overall page in this sequence is the last spread, where her Mother alludes to how Naomi got to the main DC Earth. Set in a darkened laboratory space, Cambell’s art and Abbot’s lettering work in unison to guide the eye across and into the page. The scripting is broken up into paragraphs and tucked away in the pure black cavernous ceiling space. Set against the pure black there is no need for boxes, creating a less obvious space between the words and pictures. In a sequence that is functionally like a picture book, this is the page that achieves that functionality the most.

While the totality of the sequences execution may be lacking in spots, the consideration behind it and what it is accessing in order to situate Naomi’s origin story in the overall DC cosmology is fantastic. Naomi’s origin story is the original myth of the DC universe and modern superheroes, the story of the Superman. Framing Naomi’s origin in this way feels both perfectly natural and opens up a new space that could be explored by future creative teams. I would very much like to see what this mysterious Earth looked like, what kinds of stories could be told on it and about it.

Trying to create new sandboxes to explore is something Bendis had been doing at Marvel, and now DC for years. Which is something you don’t really see in corporate cape comics any more in a post-Image world and one where creativity can be overly informed by corporate business politics (see the last half decade of “X-Men” books.) For all the “new” created by Snyder in his “Justice League” run, it is predicated on retconning and reorganizing previous pieces of DC arcana. Naomi is something new, but is informed by the old stories.

Answers to lore questions are worth a little less than death in cape comics, those answers could eventually change (see the career of Geoff Johns.) What the creative team gets right in “Naomi” #5 is how showing what that knowledge means to Naomi on a personal level.

Final Verdict: 8.0 – As “Naomi” releases the penultimate issue of their first season, it gives answers and sets up a powerful season finale.