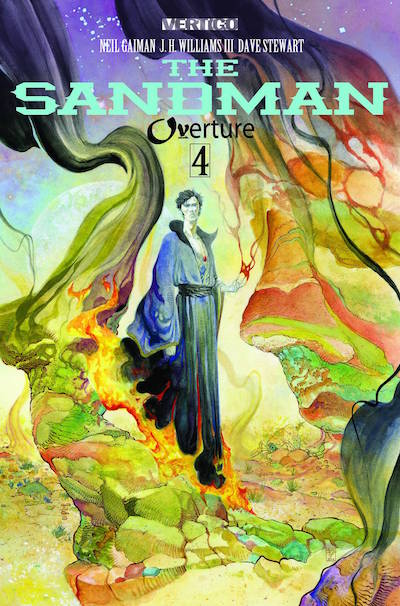 Many “Sandman” followers have been awaiting the tale that is supposed to explain to us how in the world Morpheus was weak enough to be captured, and within this tale we may finally get our answers, and also, an origin story that single-handedly destroys the mythos of Sandman. 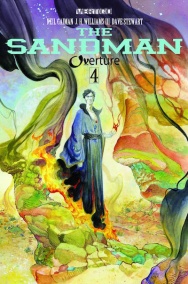 Will Hope survive by Morpheus’s side? Will Morpheus’s new quest lead him to a people of stars that will not end all of existence? Will we finally know how Sandman was ever weakened enough to be captured by hack magicians in 1916? Will he end all of creation? Possibly. Eventually.

Origin stories are often told to give us an understanding of how our characters came to be by giving us insight into how they were, and where they came from, and hoping that knowing these additional things will add new and in-depth dimensions to our characters. However, within this issue of “Sandman: Overture”, Gaiman goes as far back into Dream’s origin story to reveal the father of all the endless and it is this reveal that personally disappoints me as a reader. As much as I too was reading along to figure out how Dream got stuffed inside of a cage, and how anyone could capture a manifold being in London, 1916, with some wrinkled spells, I did not want this run to get to the point where my desire to know everything takes away the writing’s insistent ability to write with an authority and knowingness that is beyond human, and beyond my need to understand. Gaiman, in this issue, like in the proceeding three overtures, continues to write with a mix of aphorism and mystery, delight and wonder, and therefore when an event occurs that somehow asks me to tie up my stories thread into a neat little bow, I want to revolt.

I did not want to know the father of all the Endless, only because its knowledge creates an idea that rivals what most of the prequel has worked so hard to tell us–Dream is a manifold being, and our Morpheus that we’ve come to know and love is only the Earth-like version of who is Dream, and therefore our understanding is quite limited by the humane characteristics we give him. We don’t know Dream. We try to mold him into our image of a person called Morpheus when he exists in many versions all at the same time, and all without our ability to communicate with all versions. The Father of all Endless then, cannot in any way be a being that is linked into our story of how the world is created as (while it is a clever nod to our origin story) defeats that main idea. I don’t want the Father to be someone that is connected into how humans have always created their world as it limits the reader’s experience into mystifying the Endless world–which is half the fun.

Gaiman continues to tell stories within stories, and although the action is packed enough to follow along, I will say his dialogue in this version is weak. While I kept reading in pursuit of the quest, I found myself reading less for the interactions between Dream and others and more towards the interactions of Dream and the world. His conversation among the star-people was chocked full of allusions and possibilities and answers that are so well shrouded in mystery that I began to crave some of the old Sandman’s ability to demystify, to humanize, to relate to us reader in the more explicit terms possible. This, again, might just be because I’m used to reading a story tailored for me as a human reader, and I will argue that this series is not at all concerned with filling the reader in on their need, and more concerned with telling the tale first and foremost, and waiting (as we saw in the dash of Sandman Overture #1-2) to fill us in with exposition (as it forced #3 to do) when the action is not of the utmost importance to convey. It is clear, however, that these issues collected will probably read a whole of a lot clearer and pristine than they do currently.

What I’ve come to love about Sandman and this prequel in particular is that it embraces the idea that storytelling is defined by who tells the story. J.H. Williams III masterfully displays the art of meta-fiction and meta-narrative in this manifold tale through his depictions of how we gain information, how we see characters talk, and how we as a reader are guided over the pages in a landscape design that asks us to let go our neat boxes and wander in a swirl of kaleidoscope images, thoughts, and visuals displaying past and future and lost times all at once. The art in this issue continues to reveal the depth and intricacies of Dream’s world. Although I did not like who the reveal of the Father of Dream was, I did very much appreciate that I could fall into a page where visuals of old Dream and new Dream and his old father and his present father (or in what we conceive as present-time) could exist all in one layout and give us a good idea of what it must be like to walk with the Endless.

J.H. Williams III continues to pump life into Dream’s world through his ability to adapt each page to the scene so that the reader can read a part of the story in the style of the world they are in, and in the style of the moment. Talking with the star people was as cosmic and fluorescent as one can imagine that particular conversation to be, while still acutely balanced with enough shadows and one-shot-like panels of Dream and Hope to root us in the characters we know even when the panels around us insist us to feel uncomfortable, unfamiliar, and misplaced (as humans reading a story set in the skies beyond our understanding probably should feel).

Final Verdict: 7.2 – A beautiful dash of otherworldly lore; a spool of story thread unraveling quickly enough for readers to race after the tale in high pursuit but with the hopes that they too can catch onto what they are losing, and that the run was worth it after all.