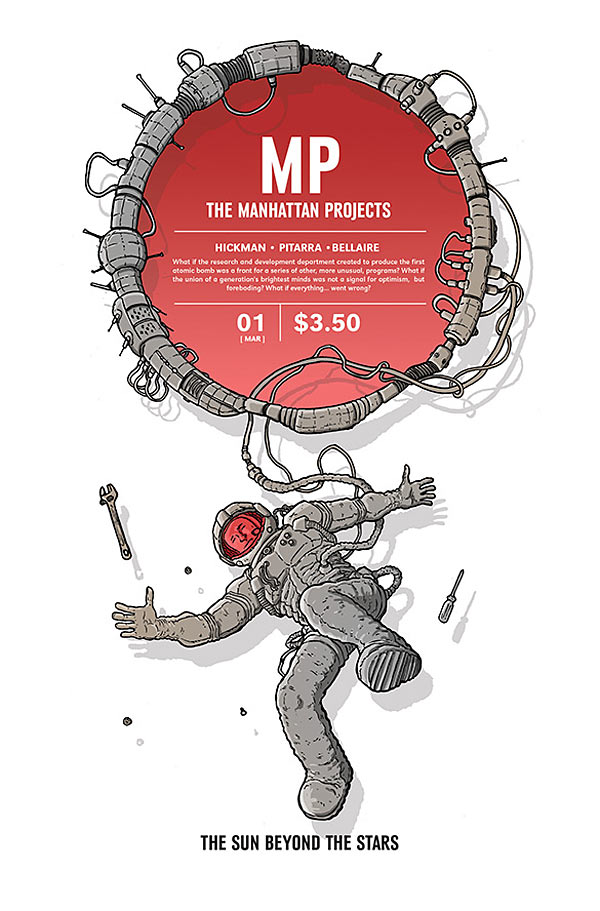 The Manhattan Projects return in “The Sun Beyond The Stars.” Expect alien justice, Russian cosmonauts, and the sweetest furry love story ever told. Check out our spoiler-free review below! 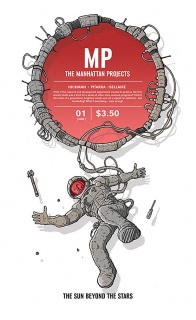 “MAN IN SPACE”
Only when he’s lost in space does the great Russian cosmonaut, Yuri Gagarin, find his true calling. THE MANHATTAN PROJECTS is back with all new stories told in a brand-new format.

The greatest FEEL GOOD, BAD SCIENCE book in the long history of man returns in THE MANHATTAN PROJECTS: THE SUN BEYOND THE STARS.

We’re pretty big “Manhattan Projects” fans around these parts. Hell, Leo Johnson got murdered in one. In case you’re a new reader, the series is a wild and innovative retcon on history, one that explores what would happen if the Manhattan Project continued after the atomic bomb. One that also explores what if everyone involved was a homicidal maniac, scientific monstrosity, alien, or combination of the three. And yet, the consensus seemed to be that the book was losing its way, becoming more convoluted and more confusing. In fact, it’s what a lot of people say about Jonathan Hickman books and also something that can’t really be answered until Hickman’s told his complete story. It’s why every one of my “Avengers” reviews begins with four apologies and at least two instances of the phrase “just trust me.”

And while we have enjoyed “The Manhattan Projects” as much as anyone else, we have to agree that it does occasionally suffer from being “too epic.” The myriad events going on often distract from each other which leads to this sometimes-intentional effect of events appearing to occur in a void. For instance, no one knows what year it is aside from clues like JFK dying or General Westmoreland being present. “The Manhattan Projects” has always been a bit too wrapped up in its own ideas, its cosmically enhanced dogs and alternate Ei(se)nsteins. And with the Recorded Feynman inter-titles that damn every character for what they’re going to do or what they’ve already done, we’re left with a Brechtian play in which we know we’re reading a comic and just waiting for everyone to get punished. Instead of historical fiction, “The Manhattan Projects” can sometimes feel like a catalog of History’s Worst™ and the Worst They Can Do To Each Other™.

And yet, after a couple months of hiatus, “The Manhattan Projects” returns stronger than ever with “The Sun Beyond The Stars.” Rather than simultaneously tackle the impossibly manic lives of all the Manhattan Project members, “Sun Beyond The Stars” streamlines the series’s perspective, focusing on one member at a time. As evidenced by this issue, it works. “The Sun Beyond The Stars” #1 may confuse new readers and even some long-time readers, but it still goes a long way towards helping ground the series in a way that will help elevate its stake and explore its characters.

For one, this issue is all about Yuri Gagarin, the one Manhattan Project Guy who is just a little boy trying his best who doesn’t really care about taking over the world with science or whatever. After his dog, Laika, went missing in space, he has gone into the Final Frontier to find her. And if you want to crack Jonathan Hickman’s biggest secret – the one bigger than Rabum Alal or whatever’s happening in “East of West” – it’s that he’s fucking hilarious. The man’s known for his “Everything Dies” in his Avengers stuff and “America is Dead” in all his creator-owned stuff but here is a comic where Actual Person Yuri Gagarin is meekly exploring space because he misses his dog. Yuri Gagarin – the actual first man to explore outer space – can’t enjoy the fact that he is amongst actual alien life because he misses his dog. That is beautiful in its simplicity.

And that tiny idea grows wildly under Nick Pitarra’s art. We’ve seen some extraterrestrial activities in “The Manhattan Projects” before but “Sun Beyond The Stars” gives us an in-depth look as to how alien society works in this universe. And it is so weird. A popular trope in pop culture is to depict aliens as otherworldly beings higher than humans but in “The Manhattan Projects” they’re bug-eyed freaks covered in bumps with tattoos pointing to their dicks and go to court for eating an entire species to extinction. They’re messed up, like everyone in “The Manhattan Projects” is, and it lends credence to the idea that people like Einstein and Feynman might actually be the smartest beings in the galaxy. There’s not much computation after all, is there?

Pitarra also excels in selling comedy through body language. There is a stark contrast between the aliens and humans and it shows in Gagarin’s interactions with them. Watching the grand alien judge sling a shoulder buddy-buddy over Yuri’s strict, upright and kind of weird human solider body is oddly endearing, even when Yuri’s rocking some Peter Quill-chic fashion. And the contrast between the aliens’ cartoonish faces and Gagarin’s detailed, realistic face smartly conveys the idea that he is an outsider.

All in all, “The Manhattan Projects: The Sun Beyond The Stars” #1 shows that the creative team has addressed some concerns that some have had with the book. The action feels connected to the world around it and I’ve got a huge sense of who Gagarin is, which is funny considering how he was one of the less highlighted characters in the original run. That said, don’t expect the plot to follow the break-neck pace of the original, though there are some seeds planted here that show Hickman and Pitarra are still delivering a story that delivers on multiple levels.

Final Verdict: 8.7 – “The Manhattan Projects: The Sun Beyond The Stars” #1 is pretty much what I wanted from the comic to begin with: a fun and interesting look at the psyche of historical figures taken to an undeniably strange extreme. Though you should not make this your first “Manhattan Projects” experience (seriously, just start at the beginning), the mini relaunch is a step forward for the series that will certainly benefit it.