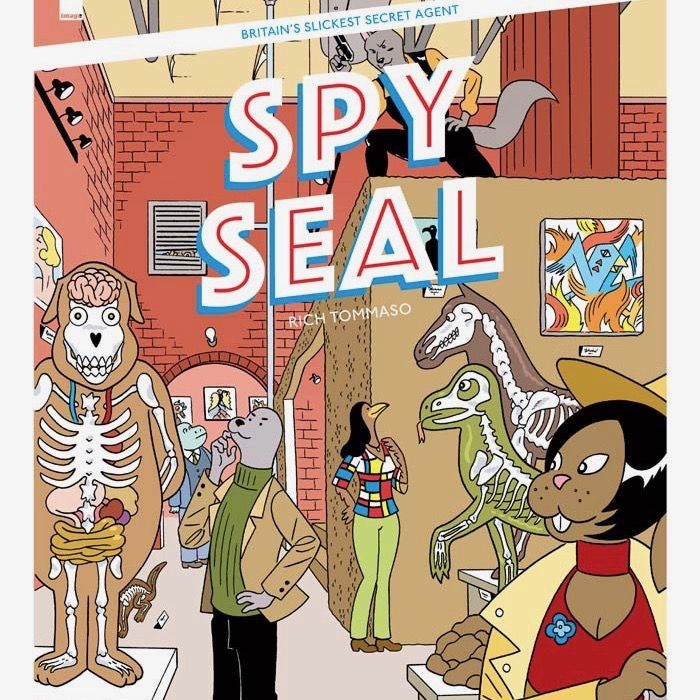 “Spy Seal” #1 is an expertly written and drawn, classic origin story that deftly establishes the series aesthetic and quickly jumps into the action. 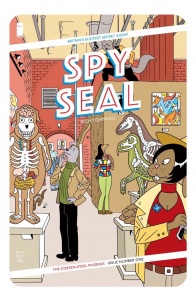 Journey into the thrilling world of international espionage as one of Britain’s most covert MI-6 divisions, The Nest, recruits a brand-new secret agent to their team: SPY SEAL! An exciting new comic series—reminiscent of The Adventures of Tintin and Usagi Yojimbo—and created by SHE WOLF author, RICH TOMMASO.

One look at “Spy Seal” #1 – with its obvious visual influences ranging from Tintin to Usagi Yojimbo to Danger Mouse, not to mention a writing style reminiscent of James Bond and John LeCarré novels – and it almost feels canonical.

What is this thing? How have I missed it so far? Where has it been all my life…?

Happily, the series – and the character – are just getting started. We haven’t yet missed a moment.

On a visually wordy, but well paced and efficient first page, we immediately meet Malcom Warner, a dapper though unemployed anthropomorphic seal who sports a distinctive light blue turtleneck sweater. Based on his character design alone, rendered in very simple strokes and flat, 2-D colors with no shading or gradation, Martin looks like a titular character. The subhead on the front cover proclaims, “Britain’s slickest secret agent” and he certainly looks the part. Simply reading the paper or admiring modern art, Martin projects a calm confidence that befits his forthcoming profession. Leaping over chairs “like a cheetah” and bounding from one rooftop to the next to subdue an assassin, merely confirms he was born for this. He’s got athleticism, style and knows how to swing a cricket bat like nobody’s business. Initially, he may not have chosen espionage as a profession, but it certainly just chose him.

Yes, it’s a simple, almost clichéd origin story, but set in an otherwise realistic world populated by a complete menagerie of talking, bipedal animals, it feels pretty fresh and exciting. And Tommaso’s witty dialogue and well rendered characters are drawn with just enough campiness to continually remind us, wherever things may lead, however “dramatic” it seems to get, it’s all meant to be good fun. Especially the action sequences, which unfold with beautiful precision.

In one brilliantly constructed sequence, two feline modern dancers (Gelfer and Hellman) strike dramatic poses, prance about the stage and contort their bodies around each other until one of them suddenly pulls a gun in a brazenly public assassination attempt. “Death to imperialist pig-dogs,” he shouts as he pulls the trigger. It’s simultaneously hilarious and eerily reminiscent of last year’s actual assassination of Russia’s ambassador to Turkey at the opening of a high profile art exhibition.

It’s art that reflects life that reflects art. And it’s a damn well constructed start for what promises to be a rollicking, action-packed series.

But let’s go back to that light blue turtle neck sweater for a moment, since I think it represents the kind of subtle yet sophisticated artistic choice that separates this book from the pack. Flip through the pages a moment and you’ll notice that many of the backgrounds are colored in desaturated warm tones or neutral earth tones – tan, light brown, cream, yellow, a soft rosy orange. Now look for our hero, Malcom Warner, the Spy Seal. In his light blue turtleneck sweater (for this issue, at least), he pops right off the page, immediately recognizable in panoramic or close-up. Our eyes track him effortlessly wherever he goes. And it’s just one of many well crafted details that make Tommaso’s illustrations top notch.

The art gallery scenes, in particular, are packed with tons of detail, visual interest and subtle humor. They’re good enough to be stand alone scenes, devoid of any context. Throughout the book, however, Tommaso expertly balances rapid action sequences with similarly slow, dialogue driven scenes. Clearly, he has fun with both and each enhances the other, telling a well rounded tale.

In the end, the plot of “Spy Seal” #1 is pretty unspectacular espionage fare and after the first issue we don’t know a whole lot more than we did at the start. (Like I said, it’s an origin story.) As it stands, the Spy Seal himself hasn’t even officially accepted the offer, though obviously we know he will. Not only is he down on his luck and desperate for a break, there’s no book if he doesn’t sign up. Surely, he doesn’t quite understand what he’s getting himself into and that’s sure to be half the fun.

Final Verdict: 9.3 – Things are just getting started for Rich Tommaso’s “Spy Seal,” but if these witty, well constructed first pages are any indication, it may rightfully deserve a place alongside some of the more iconic series to which it pays homage. It may appear wordy at first, but with a finely tuned balance of dialogue and richly detailed panels, it’s well worth spending some time with. There is plenty to grab your attention and hold it.