One of Marvel’s bold new directions starts here and, without spoiling anything, you’ll want to pick it up and get in on the ground floor. 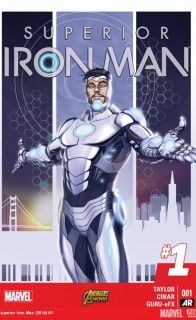 Written by Tom Taylor
Illustrated by Yildiray Cinar
BE SUPERIOR! NEW CREATIVE TEAM TOM (INJUSTICE: GODS AMONG US/EARTH 2) Taylor AND YILDIRAY (SUPERGIRL) ÇINAR START AN ALL-NEW SERIES SPINNING OUT OF AXIS! • How much would you pay for perfection, beauty…immortality? TONY STARK is going to find out. • The AXIS EFFECT has changed IRON MAN • Now HE’S going to change the WORLD…at a terrible cost.

Let’s get one thing out of the way first: the reason why Tony has changed from Avenger to (even bigger) ass is sort of dumb. The idea that the Red Skull’s control changed something fundamental in Tony is a bit of a deus ex machina to set up this story, and we have to acknowledge that. However, this is not the dumbest origin of a comic character this month, let alone this year. Comics are built on questionable ideas that become compelling stories through solid storytelling. And this issue has, if nothing else, some iron-clad work from Tom Taylor and Yildiray Cinar (see what I did there?).

Once the issue starts in earnest, all of that silliness vanishes away. The main thrust of this issue is the success of Extremis 3.0, Tony’s new app that, on a molecular level, turns people into their best possible selves – suddenly, everyone who can afford a smart phone in San Francisco is a super model with high intelligence and a chiseled physique. The issue wastes no time dealing with the socio-economic realities this would wrought, as well as the huge demand for the product. Cinar’s work is cut out for him in this regard, as he has to make every background character, more or less, attractive, without looking like a sea of sameness. Some people are still a little stockier, or make weird facial hair decisions, but everyone looks really happy and comfortable in their own skin. Also, no real fatties.

Cinar is an artist I have been a fan of for quite some time, and his first Marvel work places him firmly in the Marvel Universe with very few growing pains. The issue really shows off his versatility and knowledge of Marvel’s last thirty years. His She-Hulk practically looks ripped from her Fantastic Four membership, where the way he bathes Daredevil in shadows, even on a sunny day, is reminiscent of Joe Quesada’s work with on the character in the late 90s. His Tony and Pepper is all Iron Man, and the new suit’s assembly is all early 90s Venom. Because he is so keenly aware of the Marvel U, when he slightly tweaks something, it has more impact than if someone came in with an entirely new take on these characters – the differences matter.

And the biggest difference that Cinar is able to work with is clearly the new, chrome Iron Man suit which, I must admit, looks way cooler here than it did in all the promotional images that were released ahead of time. With so much of the plot revolving around technology and, specifically, smart phone technology, the suit needs to look as sleek as we imagine an iPhone 10 looking, and for the most part it succeeds. The design cuts out a lot of the more extraneous bulk and accessories from many of the classic suits, leaving it looking simple and full of surprises.

But Cinar really excels at showing a Tony who isn’t hiding anything behind his eyes. There doesn’t appear to be a reservoir of pain or regret just under the surface that we can use as our hope that his “Superior” status will be short-lived. He and Taylor have done a great job taking the normal Tony Stark and tweaking each element just enough to make him seem different. The wisecracks are there, but the mercy isn’t; the desire to save the city is present, but the risking of his own life has vanished. Tony isn’t a bad man now, he just lost most of the good in him.

When the series was first announced, many people – myself included – joked that this was, essentially, the same old song and dance for Taylor, who has made his bones writing an evil Superman, who was now going to be writing an evil Iron Man. Thankfully, there weren’t too many moments that felt like “Injustice,” but rather more that echo “Earth 2.” Tony and Jennifer, while fighting Teen Abomination together, have a very clear and specific friendship, which Taylor references through their witty back and forth. He then slams the door on that friendship with how Tony vanquishes his foe. Similarly, Pepper and Tony have one of the colder relationships in comics when things are bad, and things are clearly bad here. But in the past, there was always a hint of Tony still trying to impress Pepper, or you saw Pepper’s admiration for him under the surface. That’s all gone here – all that’s left is a grudging business relationship standing on top of the smoldering ashes of what used to be something special.

In fact, the Superior Iron Man seemingly is Tony Stark minus the heroism. He saves San Francisco because it is good for business. He developed Extremis 3.0 not to help people, but to exploit them. Tony Stark is, essentially, Marvel’s Bruce Wayne – billionaire philanthropist/businessman who uses his fortune to fight crime. Here, he uses his fortune to grow his fortune. The Superior Iron Man is, more or less, a superior businessman.

But while this is a very different Tony, it still feels like Tony, and that is why the book has an eerie quality I wasn’t expecting. This isn’t like the dark suited Superman from Superman III drinking whiskey and destroying bottles. On the surface, Tony is still Tony, and none of his actions, taken individually, really change that perception. That is why everything he says or does feels so insidious, because it still feels like the guy I’ve been reading my entire life.

It is also why his drinking is alarming. I know this is a popular “oh shit, Tony is in real trouble” move, but this isn’t Tony facing down the end of his life and having a drink as a sign of his giving up, or a “I’ve hit rock bottom and have relapsed” moment. Instead, this is a coldly unemotional decision, which I don’t know if Taylor treats with enough weight. Sure, Pepper calls him out on it, but that’s not enough. If anyone knows an addict in recovery, and they saw them using, I think the reaction would be stronger than just a bitchy comment. Tony’s recovery is a huge part of the character, and to dismiss it so nonchalantly was easily my least favorite part of the issue.

In fact, the only other thing in the book that didn’t ring true was the setting. San Francisco is a weird place to set the story, once you forgo the whole Silicon Valley aspect to Tony being a tech maven. The infinity pool overlooking the Bay isn’t really a thing the way it would be in Los Angeles, or even on a rooftop in New York. I don’t know if there is a city in the United States, outside of maybe Portland or Austin, that seems least likely to be obsessed with image enough to make a logical landing site for the Extremis app’s launch. It seems too lazy to blame this on the fact that the author is Australian and the artist based out of Istanbul, as I’m sure that the relocation idea came from higher up at Marvel. It isn’t so glaring as to be distracting, but it does seem to be an odd choice. However, the setting does mean that we get one of the most fun Daredevil cameos in quite some time – the “why are mobs always angry?” speech was one of my favorite moments.

The last few pages reinforce two things about the new direction of the book: Tony is out of control, and Pepper knows it. The final page had a reveal that is truly bizarre, but exciting, and should get most of the readers to come back again for the next issue. This isn’t as radical of a change as a female Thor, or Falcon being Captain America, but it is the only one of those developments that seems like it could have permanent damage to the character’s legacy, and that makes it exciting.