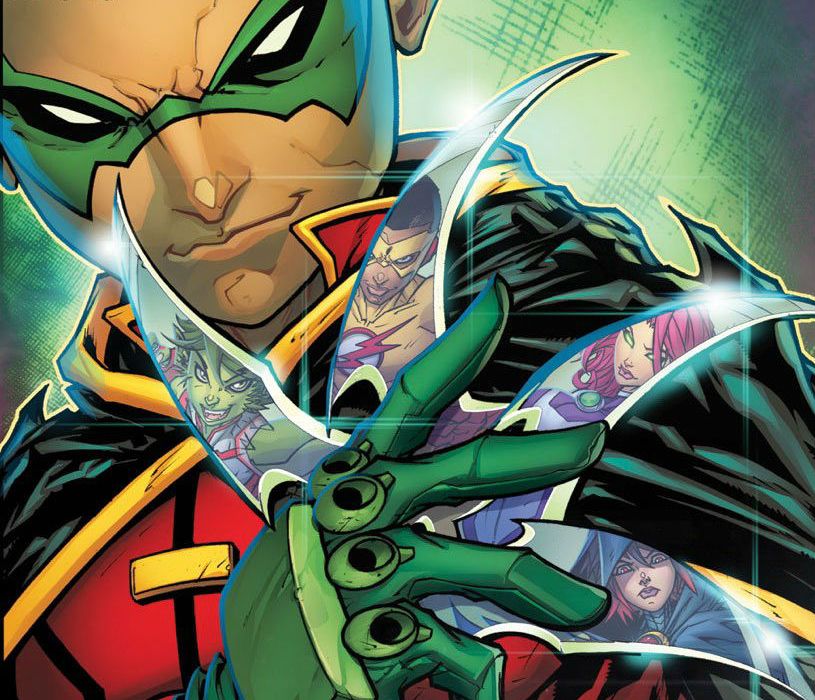 The teen team that already draws a fantastic cross-media following finally makes its way back to the post-Rebirth DCU. 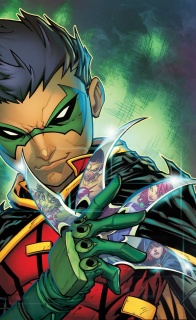 The Teen Titans are farther apart than ever before…until Damian Wayne recruits Starfire, Raven, Beast Boy and the new Kid Flash to join him in a fight against his own grandfather, Ra’s al Ghul! But true leadership is more than just calling the shots—is Robin really up to the task? Or will the Teen Titans dismiss this diminutive dictator?

So the numbers are in and it seems that, pretty solidly, week on week, Rebirth is making a distinctive dent in the sales figures for mainstream comic books at the moment. I honestly believe that a lot of that success is down to the variety of tone that the editors seem to be allowing for on both stories and art style at the moment, and it’s really refreshing to see after the admirable if slightly misguided attempt at tying every New 52 book to one another had them feeling a little like echoes of themselves.

“Teen Titans” is yet another book that feels like DC have loosened the reins on slightly, and the result is a truly engaging romp that feels ‘teenaged’ in the best ways. As the book opens, the status quo for our teens is pretty much teamless. Each member has struck out to find themselves, one way or another, in the wake of Tim’s death, and we catch up to them pursuing solo endeavours to varying degrees of success. Beast Boy is courting fame but on a downward spiral as he throws a lavish party to impress a house full strangers, Starfire is putting her detective skills to use in a heartfelt attempt to end a human trafficking ring, Raven is seeking some solace from thoughts of her infernal family legacy, and Wally is wondering what it means to be stuck between childhood and adulthood, both in and out of costume. The only thing that unites these disparate heroes is a shadowy stalker, who manages to track and trap them all before revealing himself to the helpless group.

Percy’s fresh, fun-filled script manages to capture something truly elusive, the patter and thought patterns of believable teens. Often with incarnations of teenage teams there’s either an overly juvenile bent to the writing, or the characters swing too far the other way and feel indistinguishable from their adult contemporaries. But Percy manages to strike a nice balance between the assuredness of these heroes outer selves and their more conflicted youthful inner thoughts. This issue is pretty much all exposition, and we don’t see much of the ‘team’ at all, as the bulk of the issue is built up of individual catch up vignettes.

But I have no problem with that when such a drastic re-establishing of a new status quo is about to take place. My only real complaint from a narrative perspective is the marketing, which completely undercuts any sense of tension or mystique as the shadowy Damien Wayne recruits his band of brothers. His appearance on the cover may have prompted more purchases, but it also makes this issue feel packed full of false jeopardy, and the solicit that pretty much breaks down the team’s entire first arc also demolishes any sense of fear. It might have been interesting to have thrown the misdirect in that Damien was being set up as a villain for the new team, rather than revealing that he’s recruiting our pint-sized heroes to go up against his grandfather in the opening crawl. I can understand why you might not want to hold off on revealing your power player until later in the game, but it’s strange to start reading this book when it feels as though you already have a pretty solid idea of how it’s all going to end up.

Meyers is a great pairing for this script, and he brings a playful, lighthearted approach to the artwork that balances well with the narrative. His cartoonish style may have some fans worried that this book is leaning closer to Teen Titans Go! than the team’s slightly grittier predecessor, but I feel like his art strikes a great line between expressive and empathetic. There are real moments of human sadness in this issue –  like Beast Boy’s inability to take his foot off the gas and deal with the loss of his friend, or Wally’s resigned annoyance at being mistaken for a thief while returning stolen loot – that could have been played off over the top and hammy, but that Meyers manages to breeze past with a subtlety that should be commended.

His iteration of the team also look slick, with suits that are recognisable but updated, and almost every member of the team gets at least one full page splash to really show off what they’re working with at this early stage. The script itself doesn’t call for much in the way of super-heroic action, but Meyers manages to do a fair amount with what he’s given, and I’m definitely excited to see what he offers as the series progresses.

Damien attempting to run this team is a fantastic twist, and a great way to bring the son of the bat away from Bruce’s sphere and  into the wider world. DC’s teen books are often about the pressure of the mantle, and no legacy character carries more on their shoulders than Damien Wayne. At once a Robin, a prospective Batman, and a constant potential villain, Damien has so many plates spinning that it’ll be great to see him interact with other characters who can empathise with elements of his unique situation.

While this issue didn’t exactly set the world on fire, it laid the groundwork for what is sure to be a really interesting new saga for the Teen Titans. And with Ra’s al Ghul already confirmed as the big bad for this arc, I’m excited to see how Percy and Meyers ramp up the stakes as the run continues, and how this newest variant of the team copes with a lone wolf Robin at the helm.

Final Verdict: 8.3 – A strong, smooth opening act, which only teases the reunion of the much beloved team. Percy and Meyers know how to leave their readers wanting more.