“The Batman Who Laughs: The Grim Knight” is a prime example of what happens when just the right mix of creators becomes involved on an interesting project. It delivers on multiple levels, be it as a stand-alone issue, or as part of the broader mythology at play. 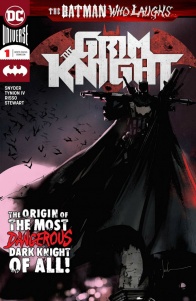 Ripped from Batman’s greatest nightmares, the Grim Knight is his world’s most dangerous vigilante, unafraid to use any weapon and go to any lengths to stop those whom he deems worthy of death. Trained with the finest arsenal Wayne money can buy, learn the secret origin of the second-deadliest Batman, hand selected by the Batman Who Laughs to bring his dark plans to fruition. This one-shot has a big 28-page story!

“Grim Knight” has a bit of an interesting back-story. It is a spin-off, from a limited series, for a character that figured prominently on a comic line-wide event. It is a ‘what if’ assumption of one of comic’s most famous characters. An alternate, for an analogue for a gimmick. Recipe for disaster, some might say. Well, if all of that is true, then how come this is one of best done-in-one stories of recent memory, being such an effective blend of exposition, relevance to current plots and dramatic character study? In a way, “Grim Knight” accepts its tropes with open arms, seemingly understanding that comics, as a medium, relishes on incremental narrative, that being the addition of new nuances of layers and layers of past adventures. It accepts the medium it belongs to, unashamed, and expands mythology the same way that the best stories have been doing for decades, going back as far as its formative years.

A large part of its success has to do with having Risso and Stewart on art duty. Risso was an inspired choice, as any fans of “100 Bullets” would attest to. The artist’s ability for the noir, for suspenseful narrative is spot on. Risso knows how to manipulate page and panel layout, using more traditional grids when conveying a lot of information and story beats, while off-kilter and experimental layouts take centre stage when deeper character examinations are taking place, or when downright creepy moments need to sink in. Just as inspiring are the instances where Risso displays gruesome action, down to its more horrific elements. There is a relentlessness to his drawings, a brutal honesty always at display (“Never compromise. Not even if the face of armageddon”). It keeps the audience absolutely engaged, guessing what will happen next… and failing at every turn of a page.

Stewart is an excellent match: his colors add a dramatic atmosphere to each page, be it through a fiery inferno some characters find themselves engulfed by, or the muted green palette of monitor screens, to the smokey foreground surrounding a commissioner Gordon, unable to halt the path of destruction set forth by the Grim Knight.

Which leads back to the story that Snyder and Tynion have concocted. “Grim Knight” is just as much an exploration of the Batman archetype, as it is a deconstruction of the caped crusader. What that means is that the entire examination of the alternate Bruce Waynes, when done as effectively as in this issue, adds dimensions to what that archetype really is. It does not matter what exact origin he’s had, or the exact choices he takes, Batman will still be Batman, as redeeming of a hero or as rotten as a nemesis that may be. It is as if the broader concept of what Batman is always remain at the driver’s wheel, with specific origins, characteristics and powers being added to that vehicle. On the other hand, by showing what could have been, the narrative reveals how fragile the hero really is, how dependent on some key crucible moments he is, to have become how he is most known for.

Some might argue that this is just another origin story, with the actual plot evolution being delegated to second fiddle, as the proverbial host to the story. And while there is truth in that, it over-simplifies what this one-shot actually accomplishes. By fleshing out its titular antagonist, it links its own origin to the broader bat-mythology, it expands the venues where the plot can actually take place. If most stories move their actors from stage left to right, narratives like this one actually make the stage larger. And when it ends, very much focused on the most traditional of comic tropes (that of “coming up next”), it reminds readers that even higher stakes are ahead of it.

With its combination of noir art, beautifully coloured and framed in an inspired manner, “Batman Who Laughts: The Grim Knight” takes its audience by surprise, taking something that would be easily discarded by readers as gimmicky and delivering one of the best contained stories as of late.

Final Verdict: 8.5 – “Grim Knight” relishes on the dark and on the ever-expanding Batman mythology to tell a haunting, disturbing story of ultimate consequences.