Despite it not showing up in our Year in Review, one of the best single issues of the year was “Grayson: Futures End” #1 from Tom King, Tim Seeley, and Stephen Mooney. Well, “Grayson Annual” #1 gets the band back together, but does it live up to the legacy of the “Futures End” tie in? 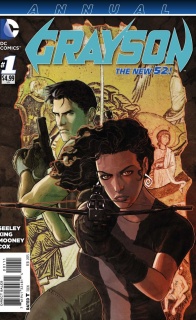 At last – it’s the secret origin of Helena Bertinelli!

“Grayson” has been really adept at creating a series made up of, more or less, done in one stories. Each issue builds off the last, in terms of relationships and general plot, but each one is isolated enough to act as a stand alone story. The annual is no exception – the solicit claims that this is the “secret origin” of Helena Bertinelli, but that aspect of the story is tossed off in one page, allowing the rest of the issue to be firmly about Dick, even if his presence in the book is obscured.

This issue is something of a tricky thing to write about, as it all hinges on a spoiler; anything I tell you, plot wise, is incumbent on believing a story that is weaved throughout the 40 pages. To reveal the ending – an ending that is relatively easy to deduce – is to both ruin the experience of reading the book, as well as to take down the central premise of the annual.

You see, the meta theme of this issue is the idea of stories: our origin stories, myths, lies we tell each other to succeed, the very fabric of our families. The very first page of the annual begins with Rock, an Irish thug and bomb maker who is one of the central figures of the book, recalling the ‘Giants of the Causeway’ myth to his companions. Rock is telling stories the entire time – in fact, he defines life in Ireland as full of rain and stories – and everything he says is treated as a tale. Sure, they believe him (at times), but they, probably correctly, assume that some of what he is saying is bullshit.

Tom King turns in a script that is very multilayered, not unlike his superb “Futures End” one, that has three very distinct layers: there is the surface level story, which is about as straightforward as you can get, there is the layer that the characters are sharing with each other, which is easy to see through at times, and then there is the truth. King weaves them together where, at points, all three are crashing together, but only one character realizes it. There is a scene where Rock is talking about an acquaintance of his from Gotham, and the way that he describes this person is a huge tell to us, the readers, while being an absolutely true statement that throws other characters off his scent.

I know that last sentence is vague and weird, but it is presented that way for a reason – as I said before, to preserve the reading experience, I need to keep things relatively undefined. Now, an adept reader may pick up on the subterfuge as early as the 2nd or 3rd page, but it isn’t my place to ruin the experience for you.

What I can talk about is the exceptional artwork by Stephen Mooney. Mooney is tasked with an incredibly difficult challenge – he has to draw a comic that is full of the not-exciting parts of a superhero or spy comic. He is, essentially, drawing a long con; while I am not trying to make light of drawing a scene of guys in spandex fighting, it is pretty clear what the goals of those pages are. Here, each page’s “point” is up for debate, and Mooney is tasked with things like giving the readers a clue as to what’s really going on without fully revealing his tell.

In lesser hands, this could b a dull book, but Mooney excels here. His facial expressions are masterful, showing many characters barely tolerating one another, or trying to hide their paranoia, or trying to convince themselves of the stories they are telling others. This is a complex issue that, aside from a few pages towards the end, just features people talking in rooms and/or cars. Mooney is an Irishman himself, and so the setting feels supremely authentic – and by that, I mean that it doesn’t have flashing signs to tell you where the story is taking place. The city structures, the pub, the landscape, it all looks like it could be in Ireland, but it also looks like it could be just about anywhere in the Western world. I mean that as a complement; my town probably doesn’t look that different than your town does, but so many times in comics everyone in Boston is wearing a Red Sox hat, or everyone in New York has a thick accent, and is ordering a bagel while holding a pizza box.

Mooney, instead, lets the character of the culture bleed through in other ways. He also lets his characters be annoyed, bored, and nervous, which aren’t exactly the most exciting expressions to draw. Everything about the issue is subdued, and serves the issue, instead of the egos of the creators involved.

As I said earlier, the issue features the “origin” of Helena, and it isn’t too different from what the Huntress of the pre-“Flashpoint” universe had as an origin: her grandfather was a Sicilian crime boss, but she eschewed her birthright. We aren’t given motivation as to why she did that, or how she wound up in Spyral, but we are given the basic building blocks of her origin, with the space for the blank spots to be filled in over time.

I must admit, I can see why certain readers wouldn’t enjoy this book – while it is certainly in line with “Grayson,” thematically, aside from a bizarre and fascinating villain known as “Saint Francis,” this is not really a superhero comic – or even a super spy comic. This isn’t James Bond doing parkour across rooftops – this is deep undercover work. If you’re coming to the book as a fan of Dick Grayson’s more acrobatic skillset, this issue is not for you. But there are a healthy number of fantastic character moments, full of winks and nods to DC continuity, and every panel is well reasoned and executed.

But, again, this is a story about stories. No one in this issue is exactly telling the truth, and the creators are no exception. You are being told to buy a book for a secret origin of a super spy, told from the perspective of a superhero. Instead, you are getting a meditation on truth, storytelling, and deception. And while you might not be getting what you are promised, you’re getting more than you’ve paid for.

Final Verdict: 9.2 – A nearly flawless, if inessential to the greater DC Universe, comic.