From its first pre-page announcement, a fact about a real-life televangelist being convicted of embezzlement and subsequently being let out of jail and welcomed back onto television, it’s pretty obvious that “The Tithe” is going to be a comic book that asks some uncomfortable questions. 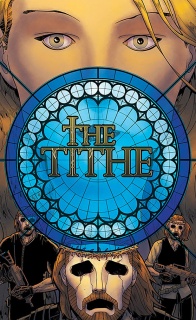 A heist story unlike any before! Mega-churches are being robbed for millions of dollars by a crusader hacker group known as Samaritan who is giving the money to causes they deem more worthy. This modern day “Robin Hood” is being pursued by two FBI agents who actually admire their quarry but want to stop the theft before it escalates.

Unlike many other offerings from many different forms of media that deal with the relationship between the heavenly host and his charges on earth, this comic book seems far more rooted in tangible reality. The creative team seem less concerned with the philosophy of organised religion as they are with its economics. In America, as with many other places in the world, Christianity is big business and, with the amount of preachers and pastors earning more than some companies’ CEOs, it’s understandable that criticism might be raised as to the legitimacy of asking the masses to part with their hard earned cash in the name of the lord.

As far as first issues go, “The Tithe” offers an interesting premise and a great set-up, a mixture of a heist movie and a police procedural that introduces most of the major players to the audience (although not to one another) while still maintaining an air of mystery. The enigmatic Samaritan (the issue’s largely absent protagonist) has been shaking down churches for months without FBI agents Campbell and Miller getting anywhere near their outfit but, as they dig further and further into the multiple scandals that these whiter than white organisations seem to be embroiled in, the question might just become: do they want to stop them?

“The Tithe” #1 is a confident and pacey first issue that shows that Hawkins is still producing relevant and relatable work after 20 years in the business. The scripting is focussed on short, sharp, speech, dispensing with narrative captions altogether. Hawkin’s manages to build character without making you feel like you’re being monologued to. The charismatic voice of Televangelist Pastor Tibbett is a particularly standout part of the issue, with his rafter-shaking self-help mantras and energetic biblical quotes riling his audience into a frenzy. He’s believably sleazy from the outset and instantly recognisable without descending into caricature.

The slick, self-aware nature of Hawkins’ dialogue is reminiscent of Mark Millar’s “Nemesis” or Garth Ennis’ work on “The Boys”, and the opening set-piece, a heist-like switcheroo, has a decidedly cinematic air to it. And the character design is every bit as slick and cinematic as the writing. The church raiding party, decked out in black paramilitary gear and masks of Jesus that look like something out of a Greek tragedy, are instantly iconic.
Relative newcomer Ekedel’s art is digitally smooth and clean, but the thing that raises “The Tithe” above most of the other releases this week in terms of artwork is Ekedel’s amazing panelling. From the opening half page panel that shows the tiny figure of the minister on stage, surrounded by giant-sized replicas of his own enraptured face, you know this is going to be a comic that will take more than a single read to fully appreciate.

There’s a lot of subtle experimentation with panelling, a choice that keeps each page feeling fresh rather than disorientating the reader. Each scene is still eminently readable and, at the most tense section of the issue, as the panels start to layer over one another like a collage, you’re reminded how important panelling can be when it comes to influencing the pace of a comic.

It’s not really until the epilogue of the first issue that you see a glimmer of the moral dilemma that I was hoping to get from this book. There’s an element of uncertainty that elevates “The Tithe” beyond the one dimensional, militant atheism that it could have all-too easily ended up expounding. As the two field agents settle down and discuss the opposite ends of the belief spectrum as far as belief is concerned. A diehard atheist and a staunch believer, they each represent a different side to the argument, but Hawkins manages to treat both viewpoints with respect and gives them room to breathe.

The epilogue also allows the art time to slow down after almost twenty pages of pretty solid action, and focus a little. While Edekel’s expressions aren’t the most nuanced being penned at the moment, his framing, and panel layout lends a sense of dynamism to the conversation that gives a very televisual feeling to proceedings. While a lot of artists might’ve fallen back on lots of talking heads and mid-range panels, Edekel manages to make a meal in a diner booth seem playful and energetic.

The subject matter that “The Tithe” is setting out to cover is an inherently tricky one. Religion is a divisive issue, and the human element of religion often gets overlooked in favour of more esoteric arguments. But, by focussing on how corruption and temptation are forces that pervade every aspect of humanity, as well as staying firmly rooted in the physical, rather than the spiritual, Hawkins and Edekel might’ve just invented a whole new genre of comic-book, ‘The Mega-Church Heist’.

Final Verdict: 7.7 – Fast-paced, fun, and full of intrigue. This is a crime thriller series asking questions for believers and non-believers alike.