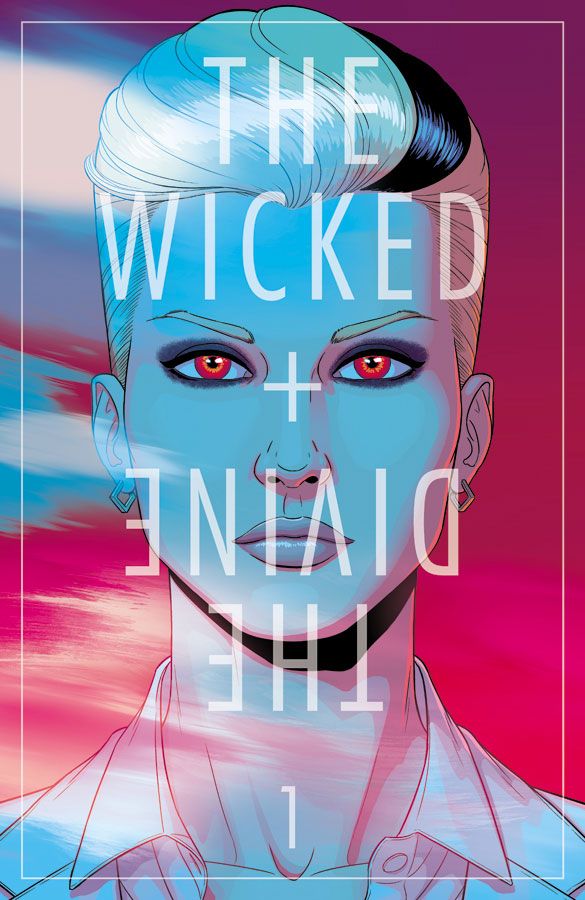 Gillen, McKelvie, and Wilslon reunite to craft a world of gods, pop, and ultraviolence. Find out why it’s our Pick of the Week in this spoiler-free review! 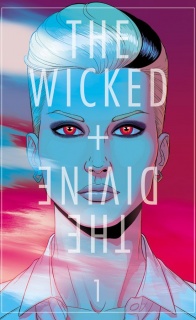 Every ninety years, twelve gods incarnate as humans. They are loved. They are hated. In two years, they are dead. The team behind critically thermonuclear floor-fillers Young Avengers and PHONOGRAM reunite to start a new ongoing superhero fantasy with a beautiful oversized issue. Welcome to THE WICKED + THE DIVINE, where gods are the ultimate pop stars. But remember: just because you’re immortal, doesn’t mean you’re going to live forever.

Magic always has a cost.

If there’s one rule to be learned from Kieron Gillen’s comics it’s this. Kid Loki, Iron Man, and David Kohl (among many other characters) learn or already know that with great power comes great sacrifice. And in “The Wicked + The Divine” #1 (henceforth referred to as “WicDiv”) the main characters – a group of teenagers who have been imbued with the spirits of dead gods and goddesses – are already coming to terms with this rule.

As the Japanese sun god Amaterasu (or the British teenager Hazel Greenaway, according to one skeptical reporter) says, with a face that suggests both mourning and wisdom, “You spend all your life wishing you were special. And then you find out you are. Nothing is without a price.”

And it’s a high price indeed. In exchange for becoming one of the most talked about people on the planet for two years, you pay the only price that’s ever mattered: death. That doesn’t bother “normal” teenager Laura though. As she says on the back cover, “I want everything you have.” It’s hard not to blame her. When Amaterasu takes the stage to give a concert in a beautiful splash page, it quickly turns into a religious experience for everyone involved, readers included. McKelvie’s long been known for his beautiful illustrations and he once again shows he can do the best facial expressions in the industry, but in “WicDiv” his art transcends to an almost Nirvana-like level. In that one page, the price required to become one of the Wicked + Divine (is that their name? Gah, let’s roll with it.) seems worth it — from the broad strokes like the screaming crowd, the iridescent glows emanating from both the space and Amaterasu, to smaller details like her eyes that look like two solar eclipses, scanning the audience and yet remaining high above them. No other page has expressed quite what it’s like to be at in the front row at The Best Concert Ever™ so succinctly.

With a sequence like that, it’s not hard to see why Laura would want to pay the price, death in exchange for two years as a McKelvie star. In this comic, McKelvie’s art is literally to die for.

The power found within the new gods of “WicDiv” isn’t just found in the panels but around them. The panel layout is about what you’d expect from a Gillen/McKelvie joint with a base of eight-panel grids occasionally broken up, yet they do some rather interesting tricks with the layout when it comes to the characters’ godly powers. Said powers are often manifested by characters snapping their fingers, a mundane action made fantastic by close-ups on the hands and a small sequence that would be at home in a Pipettes music video. But said acts are never treated with the levity that would be found in a Pipettes song, or any of the team’s previous works; just as those around them recognize the gods’ power, the hands turns red and the deed is done. It’s a cool trick and one evident of Matthew Wilson’s huge presence in this project.

In addition to “trick” scenes that quickly escalate into violently pop-art tableaus, Wilson’s subtle contributions really tie the art of the book together. Not only is he a huge part of why the aforementioned Amaterasu scene worked so well, but his shadowing lends a gravitas to “WicDiv” that isn’t really found in any of the three’s other collaborations. If “Young Avengers” was a live-action MTV series, “WicDiv” looks like a feature film, with a presence that makes it very clear that, compared to the freewheeling antics of “YA”, “WicDiv” is the type of book where the consequences feel present — not just in the coloring and shadowing, but in the snappy dialogue and Hickmanesque graphics too.

The aforementioned snappy dialogue is also an element common in Gillen’s work and it comes back in full force here. With Lucifer serving as Laura’s Virgil – an ironic sentence if there ever was one – we’re given the first look into a world that’s a couple degrees separated from our own. As Gillen notes in his excellent essay at the backend of the issue, “WicDiv” is not the world outside our window the way “Phonogram” was. As we begin to learn over the course of the story, it’s a world filled with magic, magic wielded by teenagers who are more than glad to take on the roles assigned to them by some vague force built upon the mythology of long-dead gods. And while some would feel comfortable with simply playing that concept for a few issues, and indeed there’s quite a few fun scenes in “WicDiv”, Gillen’s rule still towers over the characters, their actions, and their desires.

Magic always has a cost. And Laura, Lucifer, and others are about to realize deeply how much they’ll have to give up for that cost.

Final Verdict: 9.4 – An absolutely breathtaking book that sets up its world perfectly while leaving just enough mysteries to remain intrigued. Buy with all your heart!