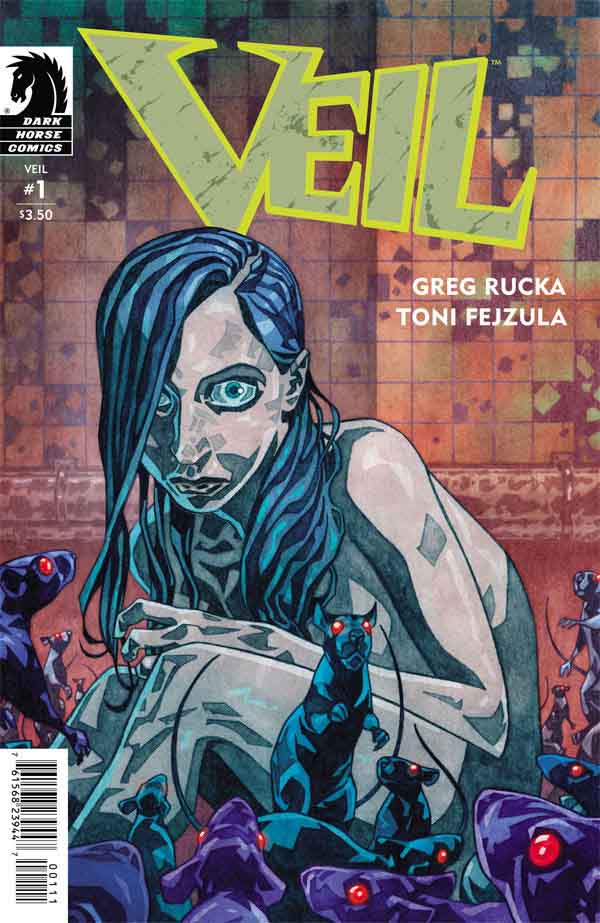 Mysterious, atmospheric, and overwhelming, this first issue from Dark Horse puts a spotlight on one extraordinary outsider. 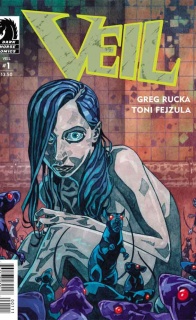 A beautiful girl wakes up in an abandoned subway station with no memory of how she got there. When men try to hurt her . . . they wind up dead. Where did she come from? And what is she capable of?

* A surprising new heroine from the creator of Lazarus and Queen and Country!


This issue is a quick read, over before it’s really begun, and it lays out a straightforward narrative. It’s all there in the solicit: Veil is a mysterious woman with mysterious powers, emerging from an abandoned subway station into a rough part of town.

The world Veil enters into is bustling with danger, and seems about to swallow her up before the issue is halfway done. It’s a very obvious tension that drives the story forward; she’s so completely exposed and vulnerable that it’s hard to look away. But just when it seems like the kindness of a stranger is the only thing protecting her, we get a hint of Veil’s hidden ability, and then we’ve got a new bit of impetus driving us forward. Veil’s true nature is the enigma at the heart of this story, and at this point, it’s anybody’s guess.

All the while, Veil is only just able to express herself, coming up with rhyming sets of words that seem to gesture toward a general meaning. And while this touch of oddness does feel like one note too many at times, the way it leaves room for interpretation adds to the mystery of Veil’s character.

In a lot of ways, this almost feels like a silent issue; the theatricality of Veil’s situation seems to eclipse the import of the dialogue, and most of the time we’re scanning for visual clues. Toni Fejzula’s ethereal but precise art seems to be just the ticket for this kind of storytelling, easing us into the story with one drop-dead gorgeous subway station. I’m not even kidding – with watercolour tones and textures, Fejzula makes a whole world out of this abandoned hole in the ground. Particularly effective is the wordless first page; some clues are laid out as to Veil’s origin, and alongside a helping of atmosphere, these get across just the right amount of information. We have an idea of what Veil could be, but there are still plenty of blanks to fill in; and at the same time, this underground world has a haunting appeal of its own.

As Rucka emphasizes in an end note, Veil’s portrayal is a tricky issue; she’s supposed to be attractive, but that aspect is easy to overstate when your character is naked from the get-go. The balance that Fejzula comes up is pretty far from exploitative: this Veil is pale and spooky, even a little crazy-eyed. Imagine ET with a human BMI and you’re not far off. But she’s still compelling, particularly as she converses with Dante, the man who’s trying to help her. It’s hard to pull off innocence without being cloying, but in her gestures and expressions she gets across a childlike sense of wonder that fits with her fish-out-of-water situation.

The way Fejzula frames her is integral to this balance. In the subway station, the compositions are tight; Veil seems continuous with her surroundings, something born straight out of the debris. Outside, we step back a little, so that her nakedness is contrasted with the lights and spectacle of the red light district. We see her in a neighborhood where sex is a commodity, but she’s actually too naked to fit into it, and this feels like the beginning of a pretty rich underlying theme.

This is an elegant first issue, building a simple framework for a multitude of mysteries to hang on. The story feels archetypical but somehow fresh; there are so many paths this outsider can take us on that what happens next is anybody’s guess. So far, though, this is an enthralling story; and if the bloody event that caps off this issue is any indication, there’s a terrifying world behind this Veil.