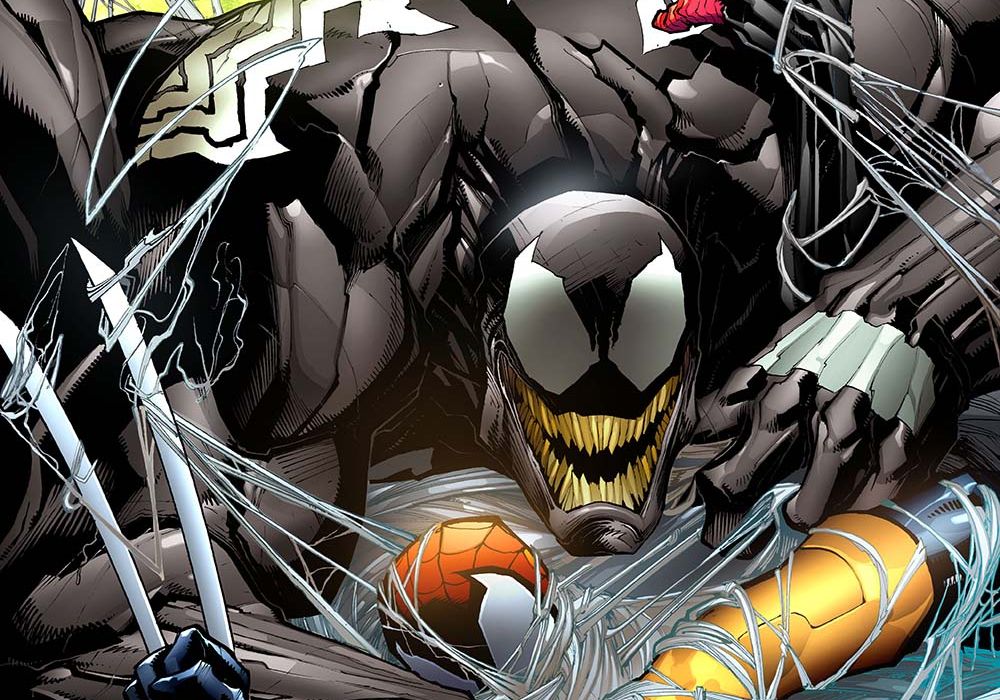 Venom has been a fan favourite character with many incarnations over the years, but none are so iconic as the toothy, prehensile-tongued creeper that was everywhere in the 90’s. Now Marvel are bringing that AND original host Eddie Brock back into the limelight for this anniversary issue, with an all-star line-up of creators for three different stories. Let’s see if they can uphold the legacy of this classic character. 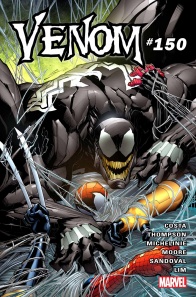 REUNITED, AND IT FEELS SO GOOD!

Or, feels so bad? However it feels, Eddie Brock and the Venom symbiote have been reunited, and they’re web-slinging their way around New York again. Featuring a host (hah!) of Venom creators from the character’s near 30-year history, this monstrous anniversary spectacular welcomes guest artist TRADD MOORE for an oversized and brutal main story AND a lethal story featuring fan-favorite creators David Michelinie and Ron Lim, reunited! With questions still lingering about how the symbiote was separated from Flash Thompson, and what lies in its future now that it’s reunited with Eddie Brock, this is one issue you can’t afford to miss!

The star of the show, ‘Heart of Darkness’, is undeniably the best story in this lot. Mike Costa does a good job reinvigorating the Brock/Venom relationship for a modern audience. It’s a great place to start the new story arc, as there’s so much history between the two it feels like an abusive romantic relationship reformed (in a way, it is). Costa plays up this factor a lot – but it’s unique here as he never directly refers to either Brock or the symbiote as good or bad. Both seem to mean well – Brock is, as always, the restraining arm that stops the symbiote going too far, and Venom is the misguided puppy trying to look good and make things right. Of course, to balance this, both too have their flaws – Brock often refuses to act, even in the face of crime, and Venom always moves with lethal intent. In a way, they have a more intimate rival relationship than they ever could with Spider-Man around, being constantly at war yet constantly in need of each other.

Putting Tradd Moore on this book was one of the best recent creative decisions Marvel has made. His fluid work perfectly fits the character of Venom, lending to both great action and intimate scenes. We immediately get a sense of what to expect with the double page origin catch up at the start – Moore’s excellent storytelling gives us all the details we need to know about Venom without having to rely on dialogue or exposition. One of the best parts of this page is the transition from a powerful, hulking Brock sitting down moving to a weak, cancer riddled version of himself in the same position. The move is so immediate that we’re compelled to feel sympathy for this monstrous character, and achieving that, especially with Venom, is no easy feat.

Moore’s cartoonish style is just as good at conveying emotion and quieter scenes as it is action. In a scene where Brock revisits the church where he first bonded with Venom, we’re given a confessional style sequence as Brock spills it all on a priest. Moore depicts Brock as both full of sorrow and determination, but as he himself says, never with regret. Similarly, it would be easy for Moore to depict the priest as cynical or boring, but he’s drawn as an understanding companion, looking especially determined to help Brock in the later panels of the sequence.

One scene I would be remiss in ignoring occurs within the Scorpion confrontation, and if you’ve already read the book (why are you reading this review if you haven’t?) you should already know what I’m talking about. Moore gives us a full, visceral look at the sheer body horror of Brock transforming into Venom. We get a feel of tone on the lead up page, as Scorpion’s battle armour spreads onto the page. Moore chooses to give Venom a slow build up here, as in the bottom corner panel we’re given a closeup of the symbiotic black goop leaking from every orifice on Brock’s face. The next page treats us to an incredible double page splash of the symbiote slowly forming around Brock’s body, tendrils and tentacles twisting as Brock leaps into a jump ready to claw at Scorpion. It’s easily the most beautifully drawn scene in the whole book, and gives us more sequential story in a single image than some of the consecutive panelling earlier on.

However, some of the ‘big’ moments of this story don’t have a lot of effect. Early on, Venom takes on a group of criminals he initially perceives as terrorists, and violently threw one of them into the wall, crushing his head and killing him. Although they are still criminals, Venom realises that they aren’t ‘terrorists’ and I guess that makes all the difference in the world as the Brock side of Venom suddenly experiences immense regret for his actions. On top of this, the impact of the skull-crushing was so minimal it was relegated to a small corner of a small panel, and I had to go back and search for this event that Brock was making such a fuss about. It harms the sequential flow of the story and made the whole scene confusing.

The next story in this issue, ‘Dependence Day’, is by “Venom: Space Knight” scribe Robbie Thompson and artist Geraldo Sandoval, and is probably the weakest of the lot. There is a clear audience here, as it is explained in the letters column that this story is a late conclusion to that series. However, it’s likely that a lot of the readership here won’t have read that book, myself included, so this was a little jarring. Nonetheless, Thompson explores some interesting ideas of Venom descending back into madness and dependency, although the length makes the process feel a little rushed. Thompson is conveying the idea that Flash, the previous Venom host, lost the symbiote in a brawl, and is constantly looking for the good in Venom, saying that ‘he hopes he is okay’. Again, I think this kind of story would work better in a longer form, however it’s interesting to contrast the caring Thompson to the (pardon the pun) poisonous Brock in the first story, driving home the idea of Brock and Venom’s abusive relationship.

Sandoval is very much a hit or a miss artist for me, but his 90’s aesthetic is well suited for Venom and the dynamic action of Thompson’s story. His art carried the weight here, especially for people like myself not completely familiar with the story’s setting. One subtle technique I liked was how early on, Sandoval induced gradual changes from the Space Knight design to the classic design in the suit, changing as the symbiote became more and more aggressive. It’s great visual payoff for the readers, and serves well as a gap between this and the former series continuity-wise. One gripe I do have with his art is that Flash and Brock are strikingly similar in depiction, leading to a lot of confusion as to who the host was in this story with me. There were no distinctive features of Flash that I could pick out, and this lead to my first reading of the story not making a lot of sense.

The final addition, ‘Malled!’ by Venom co-creator David Michelinie and “Infinity Gauntlet” artist Ron Lim, is a great little throwback story for the long-time fans. Michelinie delivers with the snarly, cackling Venom that most know and love, depicting this perfectly right off the bat as we shown Venom plucking the heads off Spider-Man dolls. However, in line with the tone of the issue, Michelinie presents Brock as someone seeking redemption, and it feels a little disappointing to what could’ve been an all-out throwback slaughterfest. What I do enjoy, however, is during the confrontation, Venom isn’t blatantly villainous, but quite pensive in how he perceives the situation. When the cop shoots at Venom, he merely makes a remark saying ‘YOUR AGGRESSION IS… PUZZLING’ instead of falling into easy bait for a quip.

Lim’s style is rougher than what I’ve usually seen in his work, but I think it works for the nostalgic throwback tone of the story. Lim depicts Venom as the classic hulking figure with a creepy, oozing tongue swirling around places it shouldn’t, and it’s very satisfying to take in. There’s some missed potential here, however, as we only get roughly a page or so of action, something that would’ve felt very fitting in this style of story. This restraint does work to some affect, however, as we get more of a sinister feel as Lim renders Venom maniacally grinning and towering over the victims in the mall. There’s nothing overly complex about this story, yet it works in its favour – Lim gives us a great depiction of this classic character in the most 90’s setting possible, a shopping mall.

“Venom” #150 is a great anthology style return to form for the character. Each story in this issue, although not consistent in quality, all feel relevant and telling for different eras of Venom. The star of show is easily Costa and Moore’s opener, but you get bang for your buck with the two extras in the back. Plus, there’s a cover gallery! Who doesn’t like gruesome Venom covers?

Final Verdict: 8.1 – An exhilaratingly excellent celebration of everything Venom, this is a great return to form for the character.