There are few creators in all of comics that can sell me with a single sentence pitch like Jonathan Hickman can, and while I haven’t heard him describe “The Dying and the Dead” in such terms, you could say this is a book about what exactly death means. A big idea like that makes for fertile ground to grow a new series. Keep reading for a spoiler free review of the first issue. 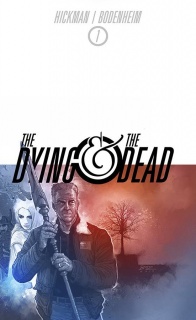 “TODAY, TOMORROW, THE GRAVE” A murder at a wedding reveals a fifty year-old secret. At great cost, a man with a dying wife is given the opportunity to save her. A lost tribe is reborn in another time. All seemingly disparate events which force relics from the Greatest Generation to come together for one last mission. Brought to you by award-winning writer JONATHAN HICKMAN and fan-favorite artist, RYAN BODENHEIM, THE DYING AND THE DEAD is high adventure meets end-of-life. 60 pages of story!

Because of his talents as a graphic designer, no writer in all of comics can claim that all of his books share a visual style like Hickman’s do. Leaving aside the graphic symbols that appear on his title pages, Hickman’s books all share a clean aesthetic that unite them and, at least in his Image work, the lettering of Rus Wooton adds a familiar element to the pages. What makes the similarity between his books even more unusual is that his artistic collaborators have such different styles.

His collaborator here is Ryan Bodenheim, with whom he previously collaborated on “Secret,” and Boddenheim’s art is by far the most cinematic and meticulous of any of his current artistic partners. There are a number of pages that I spent a good 5 minutes staring at, just taking in the breathtaking scope and detail of his work. Multiversity contributor Matt Meylikhov compared his work here to Moebius when we spoke about this issue – that is the level of talent and craft found in each panel of this issue. Because the book is 60 pages long, it seems – to a layman like me – like it would have taken a year to draw.

I’m not joking – the level of detail is stunning. Here is one panel to whet your appetite:

The overall story is a little hard to describe, because there are a number of threads happening in the issue: the issue begins with a wedding sequence that very quickly breaks bad, and there are elements of familial betrayal, an ancient cult, and a hidden treasure. However, the most compelling part of the book involves a man called the Colonel whose wife is dying. A mysterious man appears at his beside and offers him a chance to save her life.

From there, the Colonel travels to a mysterious city where a deal is offered – help us and we save your wife. The deal seems like a bad one from the start – even the one who makes the offer seems to think so – but the Colonel loves his wife, and would do anything to help her.

As I said in the intro, the book asks what death really means – death is used as a tool for some, as a bargaining tool for others, but the one perspective the book never takes is from the position of the one who is dying. We hear lots about how the living feel about death, but we never hear anyone talk about their own mortality.

The book is aptly titled, as there is a lot of death between these covers. The opening sequence of the book features a slaughter, presented in stunning widescreen format, looking as cinematic as anything you’ll ever see in a comic – in fact, even the cover looks more like a movie poster than the average cover. Bodenheim’s composition is second to none; he would have been a great cinematographer in another life. His storytelling does not suffer, however, from the more cinematic approach. Each panel still suggests movement, and all the actions are clear and well framed, and the book doesn’t fall into the “collection of pinups” territory that so many books that attempt this type of style fall into.

Michael Garland colors the book, and uses a lot of the block coloring that Jordie Bellaire and Frank Martin do on “The Manhattan Projects” and “East of West,” respectively, giving the book yet another “Hickman” aesthetic touch. In lesser hands, these types of similarities would come off as cheap, or pandering to an audience, but that isn’t the case here. No one complains when a great musician sounds like himself, and Hickman is a writer who simply has a voice and an approach that is so well refined that it can’t help but seep into everything he touches, from cinematic wars in “Infinity” to a smaller book like “Secret.” The fact that he chooses such talented collaborators allows his style to never appear stale or predictable, and by reuniting with “Secret” alum Bodenheim, he has done the impossible yet again: he has created a book that feels indispensable.

After reading this first issue, I had the same reaction that I did when I first read “Manhattan Projects” or “East of West” – how hasn’t this already existed? It feels so complete of an idea, so well tuned a concept, so expertly put together, that it feels as if it must have somehow already been put together. Maybe Hickman has a torii, like they do in Los Alamos, to bring back comics from other dimensions. That would explain a lot.

Final Verdict: 8.8 – A spectacular opening salvo to a book that I cannot wait to dig deeper into.