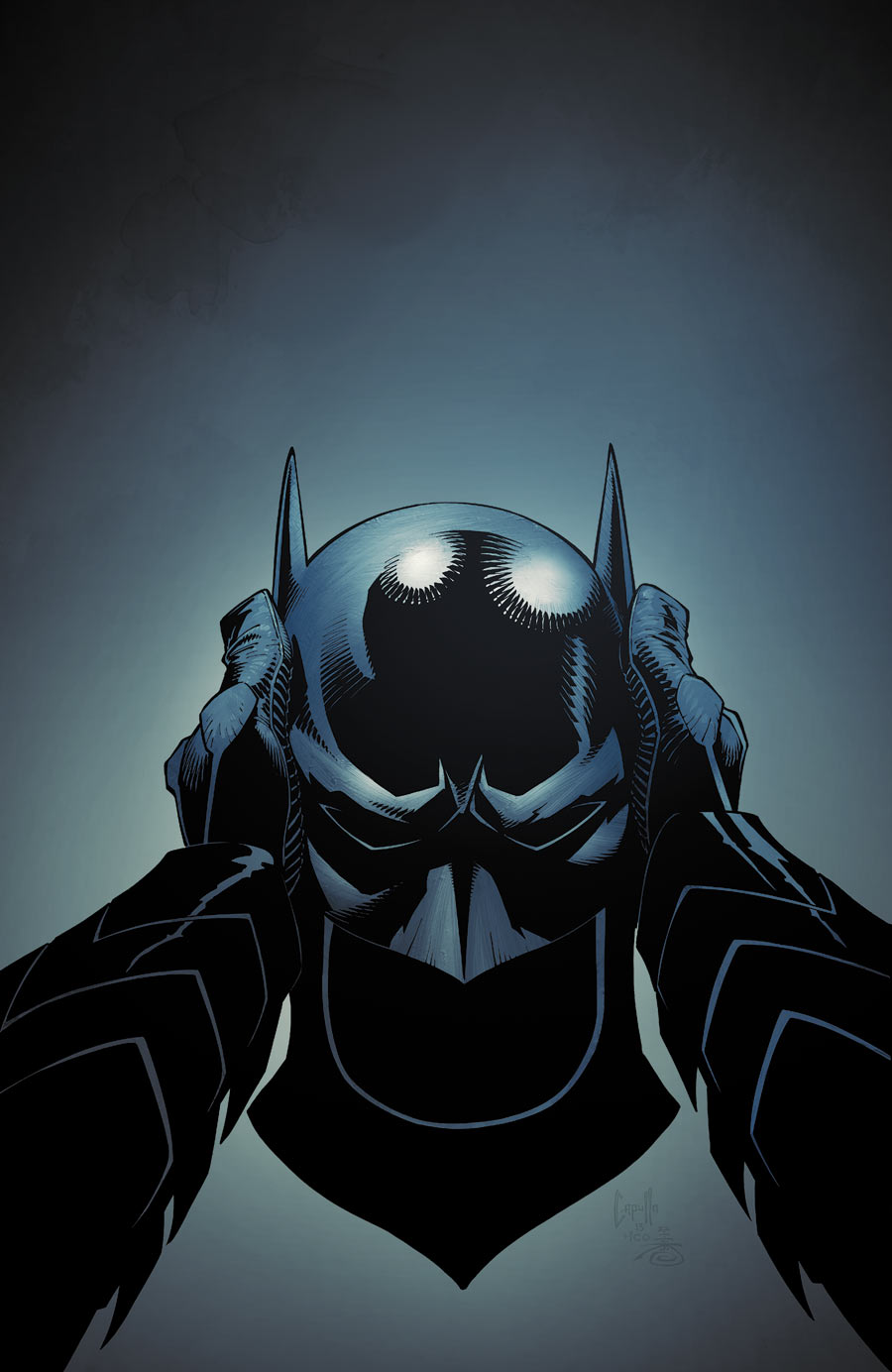 After four issues of ‘Zero Year’ the Dark Knight makes his first appearance over the skies of Gotham City in an action packed issue of “Batman” from Scott Snyder and Greg Capullo. 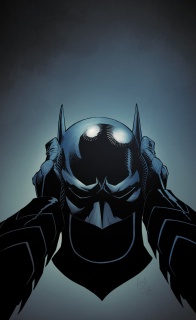 Zero Year Part Four! In this amazing, double-sized issue, Batman is on the trail of the Red Hood Gang and their mysterious leader, secret origins are revealed, and a major surprise will change the course of Zero Year and Batman’s life!

Even though Batman made his first appearance 74 years ago, today the citizens of Gotham City met their dark protector for the very first time. The story weaves in familiar elements from Batman’s past, while refreshing other aspects to fit in with the current state of the DCU. It would have been very easy for the issue to become a weird mash of homages and nods to the past, or something completely different that ignored decades and decades of story, both of which would have alienated fans. Over the course of the ‘Zero Year’ arc, Scott Snyder and Greg Capullo have guided Bruce Wayne through a new origin story for the New 52 DCU, and the first act reaches a climactic peak in “Batman” #24.

In this issue, Bruce has realized that he needs to become more than a faceless vigilante if he’s going to make Gotham safe. His previous attempts to deal with the Red Hood gang and their titular leader left Bruce brutally defeated and almost cost him his life. Now realizing the new identity he must forge for himself, Bruce dons the familiar cape and cowl for the first time. Emerging from the shadows, Batman tackles the Red Hood gang head-on in an attempt to prevent them from using Wayne Enterprises resources from launching a deadly chemical attack on the city. Even if Batman is successful, this will still be the day that changes Gotham forever.

This is a double-sized issue of “Batman”, and Scott Snyder made sure to cram plenty of story into its 55 pages. Snyder has spoken about how ‘Zero Year’ is one long story, split into three smaller acts, with the the Red Hood storyline forming the first part, but the author clearly isn’t woried about saving the big moments for the grand finale. This book is full of story points which could have been a climax on their own, be it Batman’s first appearance, Bruce Wayne’s re-emergence into public life, Batman’s first rocky interactions with the Gotham Police and Jim Gordon, and the battle with the Red Hood. In addition to the constant action of the book, Snyder is careful to include smaller character moments as well. The opening pages features Alfred shaving Bruce’s head, a way of showing the warrior identity Bruce Wayne is forming as Batman, and a brief moments with the police immediately informs the reader that Gordon’s fellow officers do not like him at all.

The Red Hood gang has been established as Bruce Wayne initial foe upon his return to Gotham, and they give him a taste of what he will experience for the rest of his crime fighting career. They are not simple enemies whom Wayne can easily best, but a real opponent who hits the young Batman on a personal level. Snyder has previously had the Red Hood himself mention the effect that the murder of Bruce’s parents had on Gotham, and has given him a sense of personal responsibility for Gotham’s sorry state. The Red Hood, and his real identity, have been the subject of hints and speculation, but Snyder is smart enough to avoid the most direct answer. When Batman and Red Hood face off in the chemical plant, the reader is suddenly bearing witness to the birth of Batman’s arch nemesis, and has a real sense of tragic inevitability to it. Even in their first meeting, Batman manages to shows his keen insight into the true nature of his opponent which few other characters have, establishing the perverse bond between the two. As if he had foreseen possible complaints that the reveal was not a shock or too predictable, in the issue’s denouement, Snyder inserts one more mystery into the Red Hood’s origins, and the truth becomes a little more cloudy.

At fifty-five pages long, “Batman” #24 has two issue worth of art in one, and Greg Capullo managed to make all of those pages unique and beautiful. If there is one issue that should be cited when referring to Capullo’s run on the series, it’s this one. This book features iconic image after iconic image after iconic image. Every other page features an image that would be the singular incredible splash page in an issue of any other series. There is a Bat-symbol made of out of captured henchmen, another when power to entire city blocks is shout down, sweeping actions scenes, visceral feeling explosions, and a beautiful shot of one character plunging into an enormous vat of toxic chemicals, all detailed, all stylized, all beautiful to look at. Capullo has lot of fun with the past setting of the story and embraces the opportunity to have early versions of the Bat-suit and the Bat-cave. The cave is just that; a hole in ground with a simple ladder and few laptops strung together. The ceiling of the cave features actual bats dangling over Bruce and Alfred, a subtle touch that really adds to the stark nature of the location. The suit is a fun homage to the characters’ initial appearance as drawn by Bob Kane three-quarters of a century ago, and is notably different from the suit worn by Batman in the rest the series. It’s more bulky, less dynamic, with a smaller chest sigil and longer horns on the cowl, and features a snazzy pair of purple gloves. The issue actually recreates the cover of “Detective Comics” #27, Batman’s first appearance, and shows Capullo’s commendable desire to honor the past while refreshing for the present.

The last ten pages feature an extended epilogue, which gives more details regarding the Red Hood and sets up the next part of ‘Zero Year’, featuring the appearance of a certain Edward Nygma in his super-villain form. The art in this denouement is done by Snyder’s “American Vampire” collaborator Rafael Albuquerque, who has a different style than Greg Capullo. Both artists excel when dealing with the dark, gritty, and slightly surreal, but while Capullo is a master penciler, Albuquerque work resembles paintings on canvas. Capullo handles the surreal as well as anyone, but at the same time makes it feel grounded and tethered to reality, while Albuquerque’s images are always slightly more fantastical. The transition between artist is handled fairly well, not coming off nearly as jarring as it could have, and Albuquerque is clearly trying to stay within the books established look. After forty-four pages of breathtaking images from Capullo he more than deserves break, and it’s a neat showcase for another artist who would likely do an excellent job drawing the Bat-universe in the future.

“Batman” #24 brings the first part of ‘Zero Year’ to a close in a thrilling and extremely satisfying way, and features Scott Snyder and Greg Capullo operating at their highest level. Snyder has crafted a story that retells Batman’s origin in a way that is true to past, while firmly entrenching the wide ramifications of the Dark Knight’s first appearance on Gotham and its inhabitants. Capullo proves that he deserves to be counted among the best Batman artist of this, or any other generation. There are half a dozen instantly iconic moments throughout the issue, and each one is better than the last. Rafael Albuquerque also makes the most of his opportunity, and stays true to the look of “Batman” while giving the reader a taste of his own style. This issue feels epic, and if this were the grand finale of ‘Zero Year’ it would be an extremely satisfying end to Batman’s new origin, but amazingly there are still seven issues left to flesh out the Caped Crusader’s emergence from the shadows. Scott Snyder and Greg Capullo have set the bar incredibly high for themselves, as this issue, and the arc itself, already feels like an instant classic.

Final Verdict: 10 – Buy it, then buy another so you can frame the art. “Batman” #24 stands with #5 and #17 as the best of Scott Snyder and Greg Capullo’s incredible run.