One of the words I’m liable to overuse when I write reviews is “noirish” – and no, it isn’t really even a word at that. But when there’s a quality out there you really like, you look for it everywhere, and when Boom! Studios comes up with a miniseries that’s so noirish it hurts, you tend to make it Pick of the Week. Then there’s the fact that “Hit” is a beautifully executed book, revolving around a concept that’s all the more compelling for being based on the real deal. 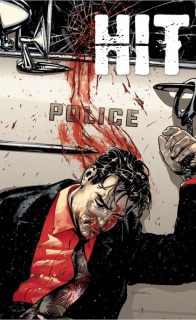 The solicit sets it all out for you, and so far as concepts go, this one’s a killer. Not only are policemen being employed as hit men by the LAPD; these officers also have to keep their extra work a secret from their coworkers. But as the comic quickly gets across, it’s not as airtight a secret as all that, and investigators aren’t exactly happy when the suspect they’re hunting turns up dead. The hit men, meanwhile – including our main guy, Harvey Slater – have to negotiate the moral grey area that results when you kill cold-blooded people in cold blood. And when – you guessed it – a femme fatale shows up, an ambiguous situation gets that much more complicated.

One of the hallmarks of noir, whether it’s film or novels or comics, has got to be that terse, closed-off, narrating voice. It’s easy to imitate in short bursts, but getting at the spirit of the thing and balancing the exposition with hardboiled concision for any length of time is a feat rarely achieved. Happily, the narration in this book really comes out swinging, with writer Bryce Carlson capturing the tone right away and maintaining it until the last page.

Meanwhile, the plot is admirably complex. Besides dodging the questions of his coworkers, Slater’s got a new assignment on his hands, and a particularly horrific one at that. But the extended criminal landscape is always lurking in the background, with big names like Mickey Cohen’s popping up at regular intervals. There are all kinds of rackets going on under the surface, and you never lose the feeling that there may be more to a given situation than the narrator will have you know. Moving forward, there’s plenty of room for Carlson to surprise us, and with the hopeless situation Slater’s in at the end of the issue, we have lots of reasons to hope he will.

As for the art, Vanesa R. Del Rey’s work impresses right away with its pulp-novel aesthetic, and keeps the tension steady with beautifully constructed compositions in every panel. Keeping the eye moving from foreground to background, there’s a feeling of paranoia that suits the plot and emphasizes Slater’s tricky position. There’s also a layer of claustrophobia going on here, not least because Del Rey favors narrow panels that read like illicit glimpses into locked rooms.

The poses are also excellent, economically portraying the mood of a moment without looking stagy or too calculated, and they look all the better because Del Rey’s always finding potent camera angles to capture them with. The only change you could really wish for here is a bit more mobility in the faces; the characters sometimes look like they’re wearing masks, although they’re admirably crooked and sardonic in close-up.

On the colouring front, Archie Van Buren’s palette choices hit all the right notes, keeping things muted and smokey and textured but punching into interesting bright tones when a violent daytime scene requires them. Best of all is the way sunlight is portrayed, filtering through windows and into dingy offices and looking far too bright to be allowed.

As you can probably already tell, “Hit” is noirish done right. The art looks great, the narration rings true, and the plot goes in the darkest of directions. And while, as a story, it might not constitute a new twist or experimentation on the tropes of noir, it doesn’t pretend toward doing so anyway. Rather, “Hit” gets at the heart of what makes noir so compelling, and plays out the formula in all its glory.