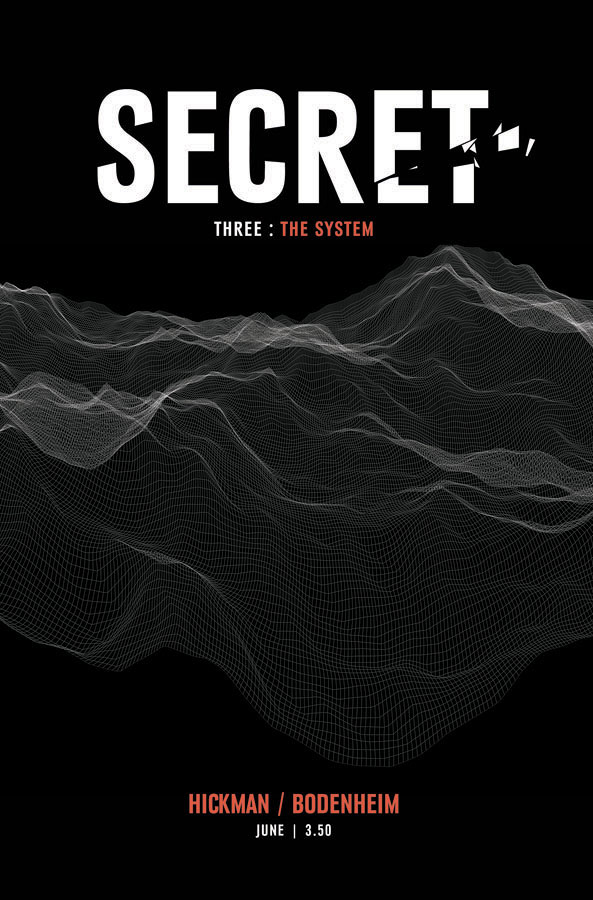 The last time you read an issue of “Secret” was over a year ago. It’s just as good as it ever was, but you may want to re-visit those first couple of issues before diving in. 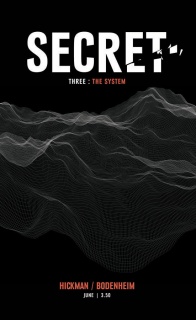 “THE SYSTEM” – Things begin to unravel as we learn the identity of who Steadfast is working for. Billions and billions of bits of data floating through the air screaming to anyone who will listen: FOLLOW THE MONEY.

Jonathan Hickman is not only the busiest man in comics, but he’s also writing the densest works on the stands. “Manhattan Projects”, his most complex work, is a cavalcade of alternate history mayhem with roots that go far deeper than the surface plot. “East of West” is a thematically strong and poetic western love story with a similar penchant for politics, power-struggles, and alternate history. His Marvel work draws on an encyclopedia knowledge of the 616 to tell its epic story. The scope of “Secret”, however, is nothing like these books and yet is all the better for it. It’s a different muscle for Hickman to flex – one with an aptitude for writing slick dialogue and intrigue.

Oh my, but this book is slick. Hickman opens on our “hero”, Grant, taking care of some business with his partner Thomas. These are guys that can wine and dine as assuredly as they can get into a close-quarters knife and gun fight in a bathroom without getting an ounce of blood on their suits. They’re James Bond and James Bond II. The beauty of “Secret” is that you can let it wash over you like a James Bond film does, but in a more typical Hickman fashion, the secret is what strings you along. There aren’t a lot of thematic layers, but this is a plot with plenty of folds to it.

Grant begins to question the work he’s doing and intends to dig a little deeper. This is a common trope, but with so few clues having been dropped, and with a reputation for the long con, Hickman has plenty of room to move within it. That long con turns a rough-and-tumble mercenary story into a deep internal investigation courtesy of Grant and company, with a brilliant new character applying a particular set of skills to the problem. His introduction is so clever that it could only have come from Hickman, who’s currently as “on fire” as anyone in the industry.

Ryan Bodenheim is similarly fiery, bringing a sleek visual sensibility and a variety of tantalizing perspectives to the title. The very first page begins from a Hitchcock-esque angle and pans out into an initially unassuming scene. But Bodenheim is not only playing with perspective here, but both creators are also playing with chronology – sometimes within a single page, without even telling us. It’s not a cheat though, because Bodenheim ensures that the sequence of events makes sense from point “A” to point “B”, even when we don’t have all of the information initially. Perhaps such careful detailing from the partnership of Hickman and Bodenheim is why we’re getting this issue more than a year after the last, but it’s impressive stuff.

Bodenheim supplies a few recurring visual motifs that are worth looking out for and require more thoughtful reading than the book initially seems to demand. Whether he’s framing an action scene in a mirror or shattering a mirror in an emotional scene, his art suggests more than meets the eye. There’s an emotional undercurrent bubbling within our complicated heroes. Michael Garland’s simple and selective color choices give the book a distinct look that plays around with similar color conventions of the espionage/crime genre. Garland peppers rich reds throughout the usual greyscale to punch up the details. In other scenes, he chooses purples and yellows, always sticking with one simple palette per sequence, with a color that sets the mood appropriately.

The secret in “Secret” potentially goes so deep that the wait for another issue might be unbearable. Were it not that Hickman is writing something like over 9000 comic books, it would be pretty upsetting. On the other hand, the fact that we don’t get to enjoy Ryan Bodenheim on a regular basis is unbearable in its own right. We comic fans complain a lot about not getting a consistent output sometimes, but these creators don’t owe us anything. If it takes a year between issues, whether its the script or the art that we’re waiting on, when the result is an issue this good, it’s worth it. Be that as it may, one of the only weaknesses of “Secret” is that Jonathan Hickman books don’t read well with a year between issues. But then again, whose would?