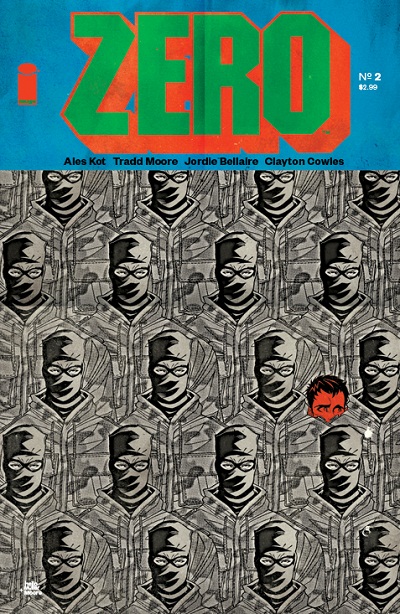 Given the perpetuity of international conflict over the last decade or so, it’s no surprise that there have been plenty of modern warfare movies, TV shows, comics, songs, books, video games – you name it. In the era of drones, these meditations usually involve clandestine organizations, spy games, and modern tech – giving warfare in comics a new set of faces and leaving the Sgt. Rock’s of the world to the archives. Ales Kot is a thoughtful writer who – through books like “Change” and “Wild Children” – clearly demonstrates that he has a lot of really interesting things to say about the state of the world. In giving us his self-described riff on James Bond, “Zero” fits right alongside his smart, layered bibliography – but it also proves to be his most widely accessible work yet. 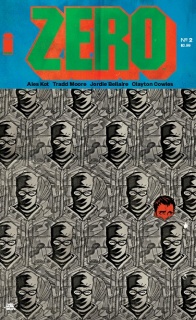 Belfast, 2001. Zero is nine years old. The Agency sends him on his first mission. Zero’s target: a supposedly ex-IRA terrorist.

With an Ender’s Game adaptation quickly and superfluously approaching, the idea of the child-soldier has been at the front of my mind a bit. I don’t really have any interest in the film, and probably not much in the works of Orson Scott Card in general any longer – that’s beside the point. The point is that “Zero” #2 is a fascinating modern meditation on the idea of the “child-soldier” – it’s not a novel concept, but “Zero” manages to examine it in some evocative and novel ways. Kot frames the agency training of the young Edward Zero as a schooling, not unlike any other schooling of the average 9-year old (except for the whole confinement in a 4×4 metal box in lieu of detention thing). Kot portrays their training as a most intense and detailed digestion of data, mixed in with a good dose of physical disipline. These are exceptional students, but to what purpose? As Zero hangs from a tree with his best female friend, the reader can only wonder what in the world a 9-year old is doing in such a place. They should be spending more time in that tree. This is never more clear than when Zero is asked to take on his first assassination mission – a sequence that is made wonderfully tense by the partnership of Kot, Moore, and Bellaire.

It almost behooves a reviewer to critique “Zero” #2 from front cover to back cover, because every inch of the physical product is additive to the narrative experience. It’s clear that not only is “Zero” a project that will feature one of the most thoughtful modern writers paired with a continually varying artist pulled from the seemingly endless supply of terrific artists that we have in comics right now, but that it is a carefully designed package in which each and every facet is important. Every page, even a recap, character guide, or supplemental back-matter, is not only present, but carefully designed and attractively presented. The exquisite lettering of Clayton Cowles only adds to the professionalism. Trappings that are sometimes put into other monthly comics as afterthoughts are incorporated into “Zero”, but captivate with their high quality. “Zero” will blow you away on aesthetics alone – never mind the gripping stories month in and month out.

The artistic approach of “Zero” is a unique one in which the only real disadvantage seems purely preferential. Some fans, after all, seem to prefer a steady artist and writer team that tells a long form story over time. This classic method has its merits and has produced plenty of all-time great stories, but after two issues of “Zero” and hearing Ales Kot describe the creative process, there is no doubt that “Zero” has what it takes to stand among those great works regardless of what method is used. I had an opportunity to listen to Kot discuss the unique openness of the writer-artist relationship on “Zero” at New York Comic Con. Kot said that artists and writers must be open and honest with one another, be completely accepting of one another’s ideas, and ultimately give their egos up to serve the story. “Zero” is proof positive that creators, above concepts and above characters, are what matter in comics. And as optimistic and idyllic as the creative process that Kot described sounds, it really does feel like a commitment to quality seems to be the order of the day.

Tradd Moore’s issue got a little bump on the release schedule, having previously been solicited for issue 4. Shuffling things about hasn’t appeared to harm the sequential narrative at all, but more importantly it gives us the opportunity to fawn over his incredible stylistic approach to the world of “Zero” a couple months earlier. “Zero” appears to be a project where the pieces can be shuffled around, but the overarching picture remains very clear. Readers may know Moore’s work from the two “Luther Strode” miniseries – his creator-owned works with Justin Jordan. His graphic style remains the same, but his visual pacing and storytelling is noticeably different when applied to the world of “Zero.” Just as Michael Walsh did in the “Zero” debut, Tradd Moore shows a great patience. Assassins or no, there is an innocence to childhood that Moore captures beautifully, as a 9-year old Zero and his friend hang upside down from a tree – the crisp autumn leaves falling all around them – they trade expressions of the unconditional affection of childhood and the grim resignation of the life they’ve been entered into. These quiet moments seem essential in a series that is going to deal with some very grave subject matter, but also beautifully capture something very honest and innocent in a book where probably very few characters will turn out to be entirely innocent. The negative space and the visual punctuation that Moore uses in these scenes combine with Jordie Bellaire’s autumnal palette to produce something evocative and bittersweet.

Moore’s style deals in exaggeration, used beautifully to depict adults as unseemly and untrustworthy in the eyes of the youth. This fluid style also serves the action set-pieces. Walsh’s approach in “Zero” #1 dealt out the action (which took up most of the issue) in rapid-fire little bursts. It’s visual language befit the frantic nature of ground combat. In “Zero” #2, again innocence plays a role, with Moore’s larger-than-life and violent style acting as an exclamation point that punctuates Edward Zero’s all-too-early “indoctrination” into the cold life of an espionage agency. The moments where Zero is forced to deal with things far beyond the bell curve of the maturity of a 9-year old are presented as startling losses of innocence by Moore’s expressive approach.

With its unique approach to the creative partnership between writer and artist, Ales Kot’s “Zero” has been a resounding success. Thanks to the synergy of Kot and Walsh, the first issue was an action-packed exercise and a ticking timebomb of tension. Here, the second issue is just as good and just as important, even though it couldn’t look or feel more different. It will be fun to see what “Zero” becomes as more and more artists and stories begin to fill it out. Smart individual stories look to weave a greater tapestry of who these characters are and what “Zero’s” core themes will be. If Kot is good to his word (and I believe that he is), then we can expect the writer and artist to continue to serve the story. If we can expect Ales Kot and his artist to craft stories this good month in and month out, “Zero” is going to be an essential book for anyone who loves the pure craft of comic books.

Final Verdict: 9.8 – “Zero” is an intelligent celebration of the craft.