Kurtis Wiebe’s last jaunt into horror, “Green Wake”, was a Lynchean experience that lingered in our memories. Johnnie Christmas’s idiosyncratic work on “Sheltered” was eye-catching and visceral. There were always going to be high expectations for a Shadowline horror series featuring both these talents, but with its nihilistic tone – and buckets of blood – “Pisces” is an aquatic nightmare you won’t want to wake up from. 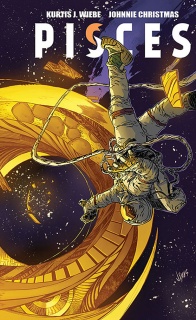 Former fighter pilot Dillon Carpenter found everything he wanted when he returned from the Vietnam War. A loving partner, a dream career training with NASA to travel through space, and soon, he will learn, a prime candidacy for a secret mission, one that will forever change the world: First Contact. But as Dillon prepares, his war trauma returns and he’s haunted by dark visions of his future. There is but one constant; the voice whispering from the stars. A sci-fi psychological body horror series from the writer of RAT QUEENS and the artist of SHELTERED.

Body horror; I’d call it an acquired taste, but that phrase sounds foppish next to such a terrifying thing. And really, I think everyone gets a kick – in the most violent way – out of the genre. We’re all born with a deep, dark chord ready to be struck by it; we all just embrace that darkness to different degrees. In any case, “Pisces” does the genre justice, heading straight for the lizard brain and grasping at atavistic themes.

Plotwise, this issue almost works better if you don’t read the solicit. A brief introduction teases out the emotional background to Vietnam veteran Dillon Carpenter’s life; the middle part takes place in flashback, in the jungle, saving the science fictional element for last. It’s a trick that only works because the central section is so immersive, leading us deep into an Apocalypse Now state of mind before making the switch.

Those who have read “Sheltered” will note that Christmas’s work is significantly more intricate here, helping to build up that sense of immersion. Details of the jungle landscape are rendered with sketchy strokes, but come across with immediacy, packing each panel to the brim. Tight compositions and frenetic layouts keep the eye moving smoothly across the page – so smoothly, and across such intense subject matter, that the urge to look away sometimes hits, and hard.

The faces have a weathered quality, and keep consistent, unlike the warping and twisting ones of “Sheltered”. But Christmas still throws us for a loop, blacking out faces like a censor when characters reach their most primal moments. It’s an intriguing technique, emphasizing the thematic darkness of the material and holding the characters at arm’s length when their actions are the most frightening.

Wiebe’s grasp on the structure is sure; the events of the issue flow like blood from a fresh wound. (And there’s plenty of that in this issue; blood nearly blots out some of the panels.) The only rough spot is the early dialogue between Dillon and fellow soldier Henry. Wiebe overshoots the dark and desperate tone of their conversation, edging into camp territory. We’re on surer ground when Dillon is alone; the beats of the action are studied but solid, merging Dillon’s perspective with our own.

All the while, Tamra Bonvillain’s colours help build an otherworldly atmosphere, coaxing curious mustard tones out of the jungle and punchy violets out of the hospital scene. Ed Brisson’s letters are, as always, clean and comprehensible, guiding us through hell with nonchalance.

The whole package holds together beautifully – and by beautifully I mean horrifyingly, because this is a story with fear and dread at its core, and fear and dread you will feel by the issue’s end. The cliffhanger, too, is masterly, capitalizing on the switch in time period and subject matter to build anticipation for the next issue. Of course, this turn could very well make for a switch in tone; it’s hard to say whether the feeling of this issue will be sustained. But the tension that runs through this chapter – the themes that bolster this tension – hint at depths to be explored.